With a stellar line-up already announced for Saturday, and the special guests and opening poll winners yet to be revealed, Stonedead 2023 is already shaping up to be the best year yet. The team has always added something special though with the Friday night party and this year they’ve knocked it right out of the park. If ever you needed an excuse to start the weekend straight away, this has got to be it and Stonedead Productions Ltd are proud to bring you three incredible bands, including a headline act that is guaranteed to drop jaws.

Kicking off Friday night, the mighty Karma Effect bring their scintillating mix of classic 70’s hard rock and soul to the festival, the London quintet having swiftly risen to public attention since forming a scant two years ago. With their whisky-soaked swagger and mile deep groove, the five friends have struck gold with their musical stylings, drawing comparisons with bands like the Black Crowes and attracting rave reviews from the likes of Classic Rock magazine who said “This is the sort of robust, hooky rock ‘n’ roll that any 70’s throwback group ought to aspire to these days”. With a critically acclaimed debut album under their belts and the groundwork prepared for their sophomore release, the band have been busy travelling the highways and byways, bringing their cool, organic thunder to faces up and down the country, doing things the hard way. These boys are headed for the top and their opening set will definitely be one of those “I was there when…” moments.

Making huge waves, Kira Mac are an exciting five-piece from Stoke on Trent, playing widescreen, gritty hard rock with a touch of blues and more than a little fire. With the melodic and husky voiced Kira (a.k.a. Rhiannon Hill) fronting the band, it’s been a heads-down rush that’s seen them win the hearts and minds of connoisseurs of quality music. A heady blend of sass and seduction, the combo have been carving quite a name for themselves, all propelled by hook-filled tunes and adrenaline rush live shows. Going from a whisper to a scream, Kira thrills as the rest of band tear into the music, the big riffs of Alex Novakovic a force to be reckoned with and the whole unit wonderfully tight but loose. With a touch of Southern Rock and huge drive, Kira Mac are bound to get your feet moving and grab you body and soul as anyone who’s seen them live or heard their ‘Chaos is Calling’ debut will testify. This freight train isn’t stopping so it’s just a case of deciding whether to jump on board and enjoy the ride or get out of the way.

Headlining the night, Stonedead are beyond thrilled to announce the return of legendary rockers SKIN to the stage in what promises to be an incendiary performance that will go down in the festival’s history. Formed by guitarist Myke Gray in 1993, SKIN became renowned as one of THE bands to see, their propulsive, well-crafted material and compelling live shows receiving critical and public acclaim all over the world. Signing a major record and management deals gave them the space to spread their wings even further and with the Gray penned classics like House of Love, Tower of Strength, Take Me Down To The River and Shine Your Light they quickly became a constant feature on television screens and magazines.

With tours alongside the likes of Little Angels, Thunder and Bon Jovi, the band were no strangers to hard work, their commitment to their craft second to none. With the 30th Anniversary of their seminal, self-titled debut coming up there’s cause for celebration and SKIN are destined to grab the opportunity to blow the roof off at Stonedead. Hungry and as potent as ever, the band will doubtless make up time for the past decade, having last been together in May 2013, showing exactly why they are still so highly regarded as master craftsmen, leading the way that countless others followed in their footsteps. The original and the best, this extraordinary SKIN show will be very special indeed and something that shouldn’t be missed at any cost. Shout it loud, at Stonedead 2023, the Gods of Rock are back.

For the full range of ticket options visit: https://www.stonedeadfestival.co.uk/tickets/ 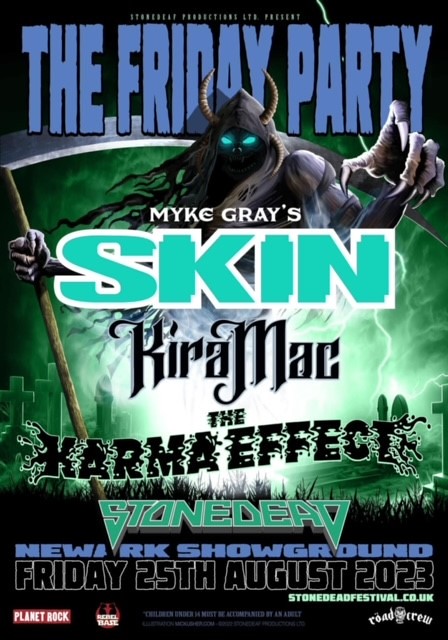