Formed on the outskirts of Toronto in 1983, Sacrifice is regarded as one of the Canadian big four of thrash, alongside Voivod, Razor and Annihilator. High Roller Records have made the decision to reissue the band’s first two albums, 1986’s Torment in Fire and the sophomore release Forward to Termination so it was a welcome opportunity to head back over 35 years and give the two albums another listen.

Torment in Fire was born out of the band’s demo ‘The Exorcsism’, with all seven tracks featured drawn onto the debut release. It’s a fast and furious exercise in speed and thrash metal. It opens with intro The Awakening before Sacrifice explodes out of the speakers with Rob Urbinati’s ear-piercing scream and a frenetic maelstrom of aggression. The power of the band is evident in every track on the album. It’s raw, ferocious, and chaotic. At times there’s more of a black metal flavour to the songs, especially the lyrical content of tracks like ‘Turn in Your Grave’ and ‘Burn at the Stake’, but it’s overwhelmingly thrash which draws heavily from Raven, Slayer, Possessed and Razor.

Although most of the songs are 100mph carnage, Sacrifice occasionally slowed things down to good effect. ‘Burn at the Stake’ broods with intensity, although the Slayer influence is undeniable. There’s the inevitable speed blast instrumental, namely ‘The Exorcism’ which is an exercise in uncontrolled turmoil, with the drumming of Gus Pynn particularly entertaining.

The challenge when listening to ‘Torment in Fire’ today is to avoid comparisons with other albums of the same time. 1986 was possibly the most important year for thrash metal with the huge releases by Metallica, Slayer and Megadeth catapulting them to mainstream attention. If you can do that, then ‘Torment in Fire’s relentless energy and passion remains an enjoyable listen. 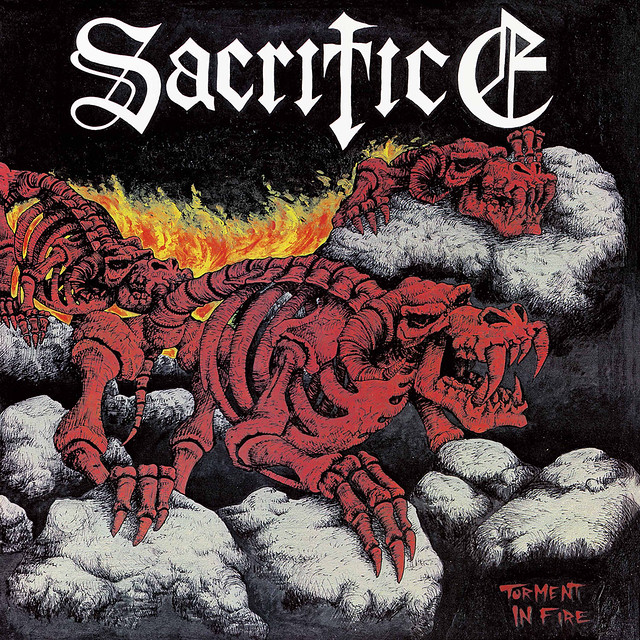 Less than a year later, Sacrifice was back in the studio recording ‘Forward to Termination’. Universally favoured over ‘Torment in Fire’, the band agreed. Rob Urbinati felt it was “vastly superior, we felt it then and now”. Fellow guitarist Joe Rico said “for me it was night and day. The musicianship and song writing on ‘Forward to Termination’ was more the direction we wanted to go and always really wanted to be”.

One dip into the album and the slicing ‘Terror Strikes’ and one can only agree with Sacrifice. Musically you can hear progression, with the songs more solidly composed and crafted without losing their acerbic edge. Urbinati’s vocals remain a combination of high-pitched screams and gruesome lower octave rasp.

Whilst the band had retained much of their visceral approach, the slower, more measured style on tracks like ‘Afterlife’ provide more variation and interest. It’s not just heads down thrash but a wider, more expansive style that. And, ‘Forward to Termination’ holds the band’s most ambitious track at the time, the nearly eight minute ‘Flames of Armageddon’. It occupies the central spot on the record, or end of side A in vinyl terms, and is the perfect example of who the band had expanded their writing.

Even the song titles were more mature. The Satanic leanings from the first album still lingered but it was less in your face. But don’t think that Sacrifice had toned down on their sophomore release. As penultimate song ‘Light of the Dead’ demonstrates, they were still an incendiary device waiting to explode.

It’s without doubt that these two albums, despite their rather rudimentary artwork are cult classics. There’s much joy to be had relistening to both, and for those who are unaware of a band who continue to play together today since their reformation in 2006, a Canadian thrash history lesson awaits. It’s appropriate to conclude with a quote from singer Rob Urbinati. “Our music is honest music. We are not a band trying to be the next huge thing. It’s a band playing what they want on their own terms and saying fuck you to anyone who doesn’t get it. This was for our people. All the ones who wanted faster and heavier metal. We wanted that too, so we made it. SACRIFICE is the last classic thrash band with the original line-up still intact. We are like family. None of us are virtuosos individually, but if you put the four of us together, we will burn the place to the fucking ground.” 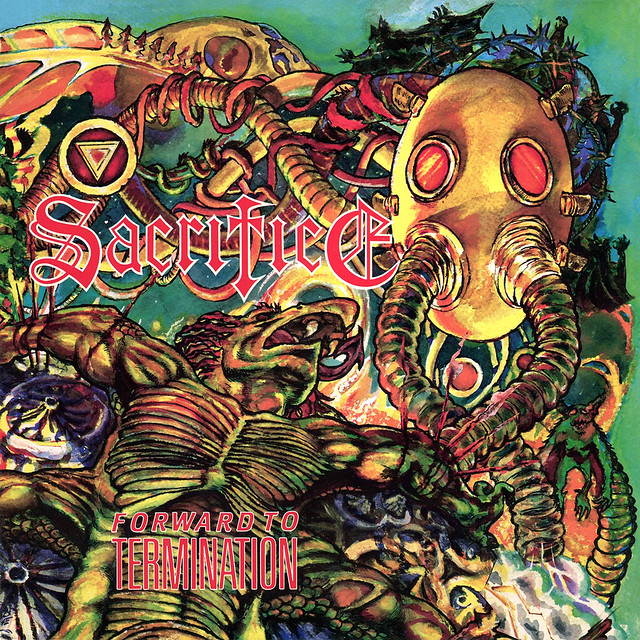