It's hump day and we have an evening of some of the best underground metal bands together in one place under the Knotfest banner.

Before we get started, it's great to have events, such as the first Knotfest event in the UK coming to Birmingham. After the success of the Commonwealth Games, I feel that Brummies have shown that we are capable and hungry for large scale shows... and I say that as Yam Yam! (Black Country lad to those not from the area.)

The Mill is a great space that works well for these type of events because there are so many rooms and routes around the building. My only criticism is WHY CLOSE THE DOORS! It's 40°C outside and the only bit of air into the venue is on the balcony and security closed the door, therefore it got very warm and sticky very quickly.

Anyway, onto the music. The evening began with Birmingham based hardcore band, Cauldron who open the first ever in person 'Pulse Of The Maggots' Festival. The crowd immediately release their first blast of energy with a sea of heads nodding along. Thrown Into Exile up next, an American Heavy Metal band who have been making a name for themselves over in the States since 2012. The band bring a huge slab of riffs and get fists in the air. Melo Death fans, get on it! Rough Justice, storm to the stage with their fierce take on Hardcore. The pits are brutal and the crowd are showing no signs of losing slowing down.

There's a slight change to the original schedule due to Spiritworld being stuck in traffic. It's worth noting that it's a busy evening in the city tonight as the major has decided to hold a huge party across the road for the all volunteers for the Commonwealth Games. Apparently there has been complaints about the noise HA!

So with a set swap, on next are Heriot a band I have heard a lot about and I was looking forward to checking them out. They remind me of Code Orange. The Bristol based four piece are ferocious and hungry, won't be long before everybody will be talking about them. SpiritWorld are another new band to me. When I saw a gathering of cowboys climbing out the back of a splitter van with glamorous diamanté jackets, I knew this was going to be special. All the way from Las Vegas, Nevada come the 'Death Western' band who are highly entertaining and take no prisoners. I will definitely be checking these guys out again!

I mentioned earlier about the layout of the venue and why it works, you have the main room, which has a huge digital backdrop on the back and with the branding for this event it really adds impact to the appearance of the stage. The room is really well lit and means that even on a dog shit phone like mine, photos come out half decent.

During the break between Spiritworld and whilst waiting for one of the main reasons I am here tonight, Orbit Culture, I thought I would have a wander around. First of all upstairs there is an, albeit small, museum to Slipknot and it was great to get so up close and personal with the suits worn by the band plus it was quite melancholic to see suits worn by the late Paul Gray.

Downstairs there is the merch area which is well laid out with some great designs from the bands, here you can also purchase (for a fraction of the venues bar costs) Slipknot's No.9 IOWA Whisky and also the first serving of the DIG BREW X KNOTFEST Hard Seltzer. It was very tasty and refreshing. Somebody who I was in a queue with tried No.9 and said how smooth it was. Anyway, back to the music.

For what the venue lacks in oxygen, it makes up for in energy. Enter Orbit Culture the minute they open with 'Nensha' the pit erupts and stays this way as the band rip through more songs taken from their 2020 album Nija and 2021 EP Shaman, including 'Strangler', 'Carvings' and 'Open Eye'. Vocalist Niklas Karlssom comments "it looks like we have some Orbit fans here tonight" you sure do! One of the aspects of Orbit Culture I love is the hook, for heavy extreme music every song has a hook you will find yourself humming on the way back home from the gig. 'North Star of Nija' gets a huge roar from the crowd.

One thing I love about metal gigs, there is a group of 15-20 dudes that have been beating the shit out of each other in the pit all night but after every song they all hug each other and check that each other are ok. Orbit Culture end their set on their oldest track for the evening 'Saw', taken from their 2018 EP Red Fog. Blinding set, these guys will only get bigger and bigger!

As mentioned earlier, my only gripe with the venue is the fact they had closed the doors on the balcony so the only bit of air had now gone. With the doors shut, by the time Sylosis came onto the stage the room was full of moisture, it was like a scene from Silent Hill with the cloud of water particles and fog in the air.

Enter Sylosis, returning after what was supposed to be a short hiatus which was followed by a pandemic. Sylosis have become a household name in heavy metal fans CD collections since their inception at the beginning of the millennium. Fronted by the guitar god that is Josh Middleton, also now known for his work in Architects, the band storm on the stage, kicking off with 'Worship Decay' followed by 'Calcified' and 'Cycle Of Suffering' taken from their 2020 album Cycle Of Suffering. The pit becomes relentless as the band go back to 2008 and perform tracks from their debut album 'Conclusion Of An Age' as they blast through 'The Blackest Skyline', 'Teras', 'Conclusion Of An Age' and 'Reflections Through Fire'.

Sylosis's crowd interaction is on point, if Middleton says jump, they jump, if he said bark like a dog...I am sure the crowd would have follow suit. I am a big fan of his work within Architects, but I do feel that Middleton seems the most relaxed when on stage with Sylosis. At this point I would like to say props to the whole band Alex Bailey, Ali Richardson and Conor Marshall are locked in tight.

Middleton thanks the fans for being patient with Sylosis and reassures us that a new album IS COMING!

With the Commonwealth Games volunteer party happening over the road and, as previously mentioned, the venue already having received a noise complaint from the mayor, Sylosis turn it up to 11 with 'Empyreal' taken from their 2011 album 'Edge Of The Earth'.

With just two songs left, Middleton introduces the bands latest single 'Heavy Is The Crown' by mentioning that when he was younger he used to love when bands would release a new song heavier than the last, something I think most metal heads relate to. 'Heavy Is The Crown' is a prime example of the band being fully comfortable and confident with their sound, they are talented musicians who are passionate about heavy music and have come across tonight, stronger than ever. Sylosis close a huge day emerging talent with the lead single from their 2020 album Cycle Of Suffering, 'I Sever'.

Thanks to Knotfest, The Mill and Surprise You're Dead Music for a great event and I look forward to this hopefully being a regular event. 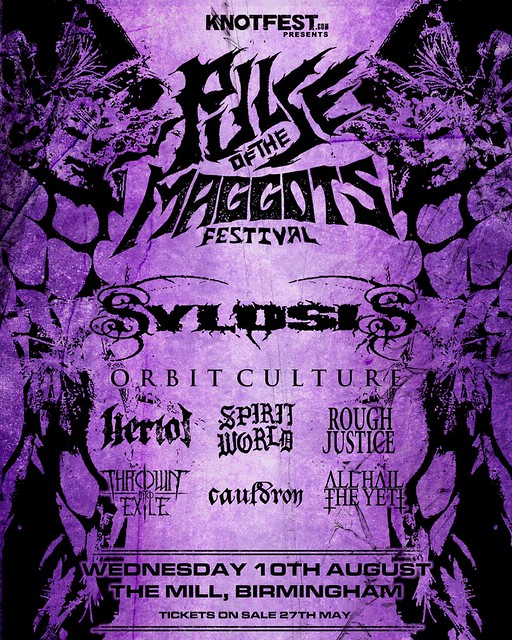