It’s been thirty one years since Polish extreme metal ensemble Behemoth first broke onto the scene. Their style has evolved over the years from those traditional black metal beginnings into something more expansive, elements of death metal appear in later works whilst still retaining their blackened roots.

After a triumphant headline appearance at Bloodstock Festival this year, the band have the world at their feet and their twelfth studio album ‘Opvs Contra Natvram’ promises to propel their career yet further.

Opening with ‘Post God Nirvana’ the dark, haunting drum beat leads into Nergal's cries before returning to that drum beat, steady, foreboding and now joined with an ungodly chant. A masterful introduction to the new opus this band have produced. 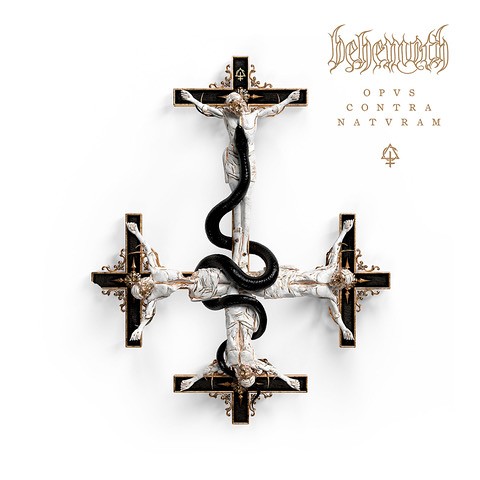 If the haunting drum beat lulls the listener into a false sense of security then they are in for a shock. ‘Malaria Vulgata’ starts with a barrage of blast beats and a ferocious guitar onslaught, feeding off the bands black metal roots perfectly and leading us into ‘The Deathless Sun’ which has its foundations purely in death metal, but is no less Behemoth than the track prior.

The album title roughly translates to “going against the current” something that has been a constant in the bands storied career so far and Nergal focus’s his ire against the negative values, morals and ethics of modern society, cancel culture, social medial et al.

With a backing track of blackened extreme metal, Negral's cries hit hard. His vocal talent delivering a rasping brutality like no other whilst the guitars ooze black metal hatred in between blasts of utter ferocity.

It’s a Behemoth album which is more accessible than previous outings, it’s no less extreme, no less hard hitting, but it opens the door just slightly for a wider audience. There is a quality that will draw in a new wave of fans whilst standing firm enough in its roots to keep that existing fan base totally on board.