If you're not familiar with Deformatory they are a technical death metal band from Canada. Now before you go oh another Canadian tech death band, let’s give you some background. Deformatory have been putting out a slick back catalogue of material for many years such their 'In The Wake of Pestilence' debut full length which is an absolute superb slab of relentless technical brutality. With two further releases which followed it already in the book the band have set Harbinger as the title for their new four track independently released effort.

What instantly grabbed me is how refined Deformatory have become with their sound but without making a complete change. I always got a very strong Origin vibe from their first two releases as the band would pile sweeping technical riffs to create a furious non stop musical assault. Now those riffs are still there but the song structures on Harbinger have greatly improved and that is what has refined the bands sound. Now I am not as familiar with the bands 2021 full length 'Inversion of the Unseen Horizon' as the first two records but I sensed that progression with the album and Harbinger is yet again a step up from that. 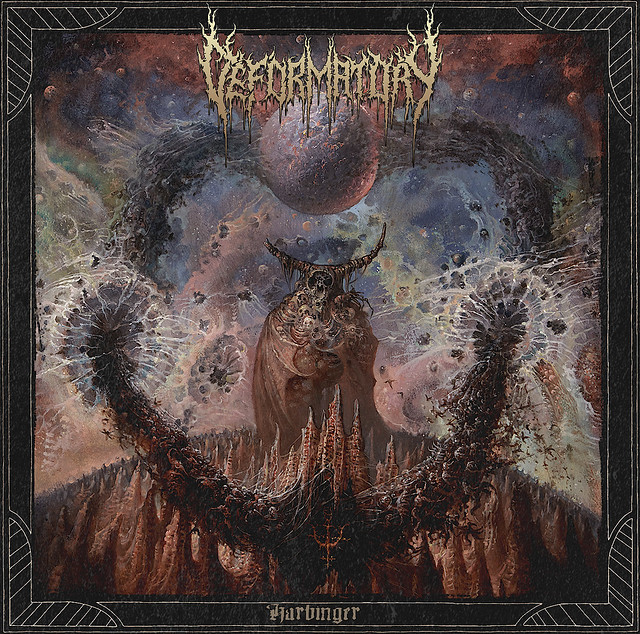 Guitar player and vocalist Charlie Leduc, creates a series of tracks which are both brimming with utter fury and at times dashes of a haunting melody. The EP’s final track 'Dustcult' sees a combination of the two with the melody being used alongside that fury with great results. Another massive improvement from past releases is the overall sound on the release, it’s a clean and potent sounding EP. All the notes come through crisp and clear to the ear and have real punch. The drum sound is also excellent as drummer Neil Grandy offers an excellent display of sonic battery behind the kit.

As far as tech death goes this is a top notch display of the style and has seen Deformatory grow their sound where I feel they are no longer a clone of their peers, and create a really top notch four tracks of some of their strongest material. If they continue on the path of progression that they have shown on Harbinger then the next release will be very special.