Album Review: Kid Kapichi - Here’s What You Could Have Won
Reviewed by Dan Barnes

Here’s What You Could Have Won – the familiar mantra of Jim Bowen’s Bullseye as a now out-of-reach Mini Metro, speedboat or fitted kitchen was wheeled away from a couple of mates who had failed to score 101 or more with six darts (non-dart player threw first) – is the second album by Hastings four-piece Kid Kapichi. Their first full-length, This Time Next Year, released back in 2021 was an angry album of the like of which Frank Carter and the Rattlesnakes and Slaves are well known, and explored themes of division, violence and mental health.

Here's What You Could Have Won comes close after the debut and is eleven bigger, punchier songs in the band’s Beat Punk style and comes out swinging at the topics of the day.

The lifting of lockdown and the resumption of ‘normal life’ does not seem to have assuaged Kid Kapichi’s ire one single bit and they kick off this sophomore platter with New England’s industrial leanings and Hip-Hop beats. Featuring Bob Vylan this vitriolic commentary on the state of the nation is built around fat, grinding guitars and sets the caustic tone for what is to come.

Like the aforementioned Rattlesnakes and Slaves, Kid Kapichi use Punk as a starting point from which to construct their art, veering away from the central musical components but never straying far from the overarching aesthetic of the genre. Perhaps the most conventionally Punk the album gets is on Cops & Robbers, with its pounding bottom-end and crunching guitars or Super Soaker, which lets the bass do the heavy lifting through the verses, only to unleash a ferocious guitar for the chorus. 5 Days On (2 Days Off) is the band’s seething consideration of the wage slave culture, featuring a simple, but effective bassline and a Wargasm-type approach, this track is a might-more subtle than Dirt Box Disco’s Working for Wankers. 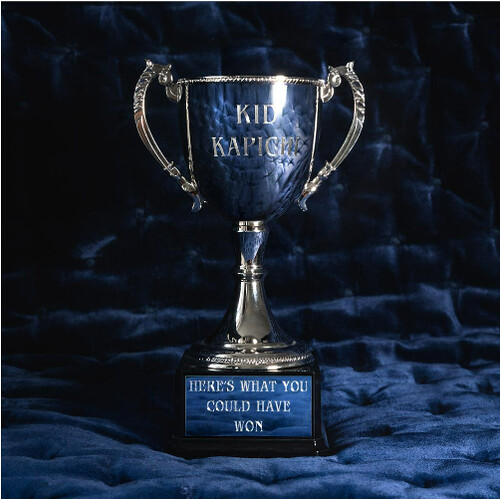 Rob the Supermarket and Special resound with the feel of Frank Carter and his crew; unsurprising as the former-Gallows man was instrumental in giving Kid Kapichi their big break. Yet the almost-poppy Punk sound of those two tracks is the opposite of Tar Pit’s lumbering, plodding progression or the Prodigy-influenced Smash the Gaff, that mixes heavy dance rhythms with some dangerous street vibes.

Promotional material suggest Liam Gallagher has been singing the band’s praises on Social Media after hearing the Oasis-inspired Party at Number 10, an acoustic satire of the Partygate scandal, complete with whistles and a chorus of: “One rule for you and another for us.” Lest we forget those people work for us. Never Really Had You is from the Oasis mould too, written around a piano and warm, lush strings before swelling to a climax.

Kid Kapichi’s debut was a record that held much promise and, with Here’s What You Could Have Won emerging less than eighteen months after, I think it’s fair to say these four lads have a big future ahead of them. With many new and innovative British bands breaking through and securing themselves on big tours and festival bills on a regular occurrence it can surely only to a matter of time that we see Kid Kapichi rubbing shoulders with the big boys. The evidence suggests that day is coming soon.