Album Review: I Am - Eternal Steel
Reviewed by Rick Eaglestone

If album art is anything to go by, what reminds me a three headed version of Panthor, held by a woman clutching a skull of her enemy then the lone star state natives I AM are ready to do battle brandishing a blend of thrash and death with new album 'Eternal Steel'

Opening track 'The Primal Wave' starts off with a cacophony of skull pounding brutality so strap in it is going a be a very bumpy ride!

Early Highlight tracks appear in the form of 'Surrender to the Blade' which is full of crunching riffs, epic solos and heart pounding drums, there are nods to obituary here and I am all for that, and also the follow up by the slower paced 'The Iron Gate' which completely changes the dynamic and I wouldn’t have minded it staying that pace but the band put their foot on the accelerator on the later part of the track. 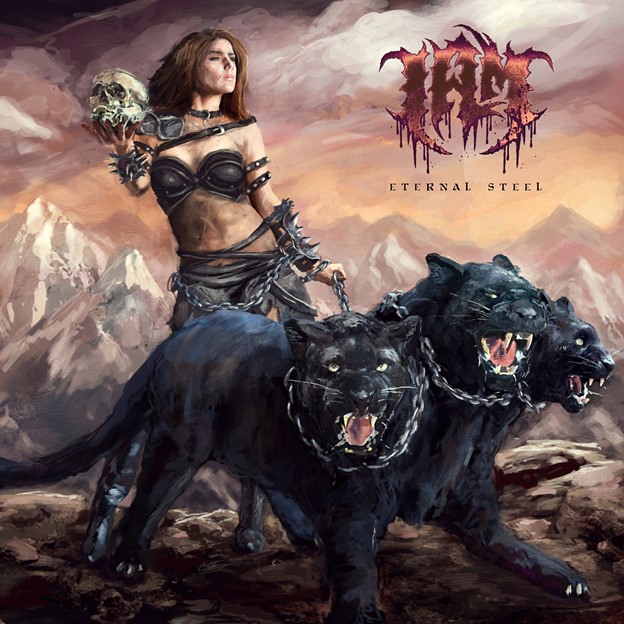 Circle pit prediction time, I defy anyone not to want to be involved when they hear title track 'Eternal Steel' straight up no-nonsense Texas death and that solo! I had to stop typing, repeat the track and fully immerse myself in it.

The album goes from strength to strength with 'Vicious Instinct' and a track I love for the name alone 'Infernal Panther' Immediate new ringtone activated also; it is one of the most diverse tracks on the album.

As it goes on you get the sense that band have really pushed the boat out with soundscapes especially, no track sounds the same & each has something different from next – case in point 'Queen Incarnate' and especially 'Heaven and Earth' with slow, drawling vocals which match the atmosphere of the track perfectly.

The old school death metal gets twisted inside out to a modern sound with 'Price of Pain' with 'Eye Candy' following into the web of snarling rage and final track of the album 'Manic Cure' ending what has been nothing short of majestic.