“We’re only here to have fun, get drunk and makes lots of money”

Quite the opening statement to make on an album, but that’s exactly what pirate metal troupe Alestorm do in the lyrics to new album opener ‘Treasure Quest Party Quest’. For those of you unfamiliar with Alestorm, they are quite the party band and have forged a career on some of the most enjoyable live show’s you will ever witness, all based around their pirate gimmick. That element is one which some traditional heavy metal fans struggle with… Alestorm are band with a strong gimmick and everything about them revolves around that gimmick. 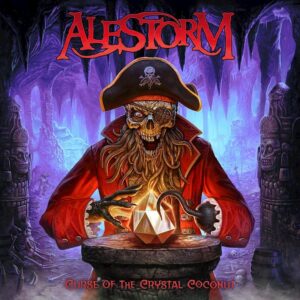 ‘Curse of the Crystal Coconut’ is the bands 6th studio album and if you can get past the gimmick, or simply enjoy the gimmick, then you are in for a treat. The album is an upbeat, romp of a heavy metal album set around pirates, drinking rum, wooden leg’s and… zombies – yes really zombies!

‘Fannybaws’ picks up where opener ‘Treasure Quest Party Quest’ left off. Rolling riff’s, comedic lyrics, and an anthemic tune with designated “sing-along” section ready made for the live arena. ‘Chomp Chomp’ changes things up a bit with it’s chugging, snarling opening riff before the light hearted stuff kicks in, all highlighted with guest vocals from Vreth of Finntroll.

‘Zombies Ate My Pirate Ship’ presents some unique lyrical content, opening as an initially sea-shanty before kicking in as a full on thrash metal assault. ‘Shit Boat (No Fans)’ opens with the lyrics “Your pirate ship can eat a bag of dicks” and if that doesn’t bring a smile to your face, nothing will! Based around traditional football chants and given the pirate twist it had me laughing from start to finish.

All round, if you’re looking for a musically expansive and boundary stretching release, you are probably best off looking elsewhere. However if you need cheering up in these times of lockdown look no further. ‘Curse of the Crystal Coconut’ is the idea tonic for those glum days with its hilarious lyrics and romping heavy riffs. What’s not to like?