With a name like Last Retch, and sporting artwork that Sadism And Severed Heads does, it was impossible to ignore what this record suggested lay in store for me. Last Retch, hailing from Ontario, Canada, are a very new band who, aside from this debut full length release, have only ever released one Demo as of 2021. Its also nice to see a band releasing their record through independent means, I haven’t checked much out lately that has been released through those means lately. So, let’s get right into the thick of things and see what Sadism And Severed Heads, and Last Retch, may offer us.

There are many death metal bands out there that seek to turn their songwriting and general flow of sound into something smooth, or perhaps something ripping. This isn’t that kind of album. Last Retch opt for a much more brutal approach to how their riffs strike you; unlike a crunching approach to songwriting the band have gone for something punching and weighty. It becomes all the more pronounced when their songwriting seemingly chops itself up, enabling their riffs to not only demonstrate their fluidity and how they’re not simply following a mundane pattern, but to also allow the clenched fist that is their sound to be fully realised. I’d say this album isn’t too far removed from being dubbed as a Brutal Death Metal record, at the very least where riffs and guitar work is concerned. If this album were to go any harder, you’d need to call yourself an ambulance for the wounds Last Retch are looking to impose.

I did find this record to be quite the loud affair. When the first bite hit me, I practically jumped out of my skin. I wasn’t expecting my senses to be assaulted to the degree that they were. While the record managed to achieve that sense of assault on me throughout its songwriting, I did feel like the volume had been cranked a little too high on the mix. I had to bring the volume down a reasonable amount and while I do enjoy my metal good and loud, it was a little too much. Sometimes by bringing the volume down you’re able to better experience what the band are giving you and that was the instance here; had I left the volume where it was it would have not only impacted how I absorbed this album’s expedience but may have hurt my hearing for the long run. It’s good to have a powerful sound but the audience needs to be able to coherently listen to it as well. 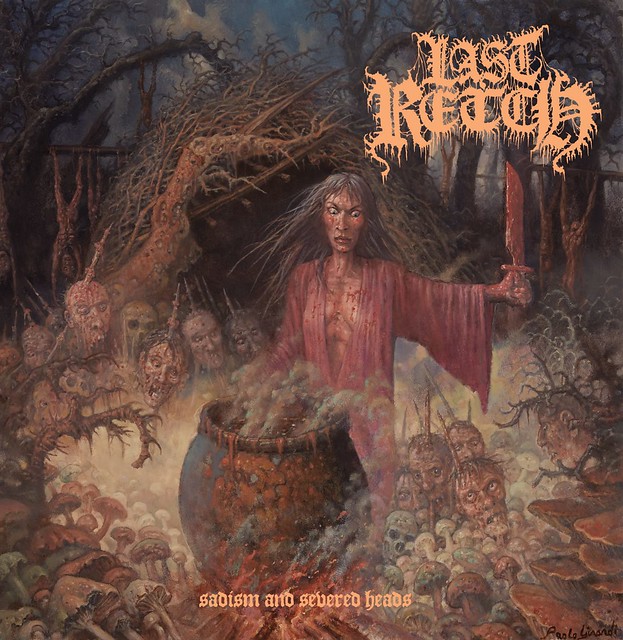 The record likely hits as hard as it does due to the amount of bass that’s been thrown into the mix as well. It’s more than likely why the guitar seems to strike with such clenched might, this is no weak and lacklustre sound that the album unleashes; the guitar work is powerful but the additional injection of bass within the mix provides a bout of adrenaline that is nothing to turn our noses at. It also renders the basslines with thick resonance, there’s no hiding from them. If anything, it helps to underline everything in some bold finesse. Everything on album here is gunning for your head at every conceivable opportunity and I’d bet the bass has something to do with it, expanding the record’s sound to bursting point as the album’s cover only seems to stretch and tear as this record practically destroys itself upon playing. The bass drums too have this peculiar resonance where their strike feels engrossed with power, a gathering thunder that only continues to grow in sound and scope as things pick up, couple this with greater intensities throughout periodic blast beats and you’ve got a drumming performance that does exactly what you want it to do; it commands, and demands, your attention.

The vocals, if anything, are what give this record the blunt and devastating might you’ll be associating with it. Reminding me of early death metal vocals when things were still deeply savage and venturing towards a darker and raw performance, Last Retch’s vocal work gives this album a more primal essence. There’s little about this vocal delivery that suggests anything akin to a refined or mature performance; the vocals are looking to rip your tongue out as badly as any of the instrumentation. Tonally, the vocals round out the record into something sonically believable. There’s nothing left out of the band’s sound that renders the record with a weaker element; it all binds together to form a collective whole that is simply frightening to the degree that the band are willing to pummel you. The delivery is raw, you can feel the reverberations of his vocal output going through his throat and every inhale of oxygen he’s taking for the next vocal assault.

In conclusion, Sadism And Severed Heads is a death metal record that gets right to the point of things and then stays there. It doesn’t move too much from the beginning where you first discover what the band are like, nor does the songwriting gyrate too greatly to give us some diverse bouts of songwriting. This record does absolutely nothing that you’re not expecting it to do but with the might it’s been given through the mix, it doesn’t impact your experience too much. With cinderblock density this album unloads one gut punch of a track after another without deliberating too long on each one; the band don’t spend much time on any track as they’re looking to hit you again and again without much time separating the blows in order for us to feel the full brunt of their onslaught. It doesn’t go on for too long, but you could say that’s to make it easily replayable. That’s certainly a possibility, just make sure to lower the volume when you do so.