How many of you can name another Blitzkrieg song apart from the one that was made famous by Metallica? Yeah, bit of a challenge. Well, pick up this collection of albums by the Leicester based band and you can fill your boots. Blitzkrieg have certainly achieved a measure of fame because of Mr Ulrich’s fascination with the NWOBHM movement of the late 1970s and early 1980s. Only vocalist Brian Ross (also singer with Satan) survives from the original line up in today’s band, and he can still bring it in the live arena. This collection does go back to the early days of 1980 when Ross, guitarists Jim Sirotto and Ian Jones, bassist Steve English and drummer Steve Abbey initially raised the Blitzkrieg standard. Having split the year later, Ross brought the band back to life with a line-up of Mick Procter on lead guitar, Jim Sirotto on rhythm guitar, Mick Moore on bass and drummer Sean Taylor. This was the line-up that most would say bears the moniker of the ‘classic line-up’, for they recorded the debut release ‘A Time of Changes’ in 1985 for Neat Records.

Listening to ‘A Time of Changes’ today is a challenge. Across the water at the time, seminal thrash metal outfits were already carving out legendary status with albums such as ‘Hell Awaits’, ‘Ride the Lightning’ and ‘Bonded by Blood’ and Blitzkrieg today appear positively pedestrian in comparison. But there is an authenticity about Blitzkrieg that endures, their honest endeavour and commitment making it a perfectly listenable album. Opening track ‘Inferno’ still rattles the fillings, ‘Blitzkrieg’ still works on every level, the riff sitting in the all-time hall of fame of NWOBHM riffs. The title track shows a more progressive and adventurous side to the band. This package includes several demos that are likely to be of interest to fans back in the day. I’m not sure how many versions of ‘Blitzkrieg’ are needed but if you like to see how things develop, then this may be of interest.

The ’Blitzed Alive’ cassette recordings do provide interest however, for many of the songs that would end up on ‘A Time of Changes’ feature in this demo from 1980. A bold cover of Deep Purple’s ‘Highway Star’ is also of novelty value. 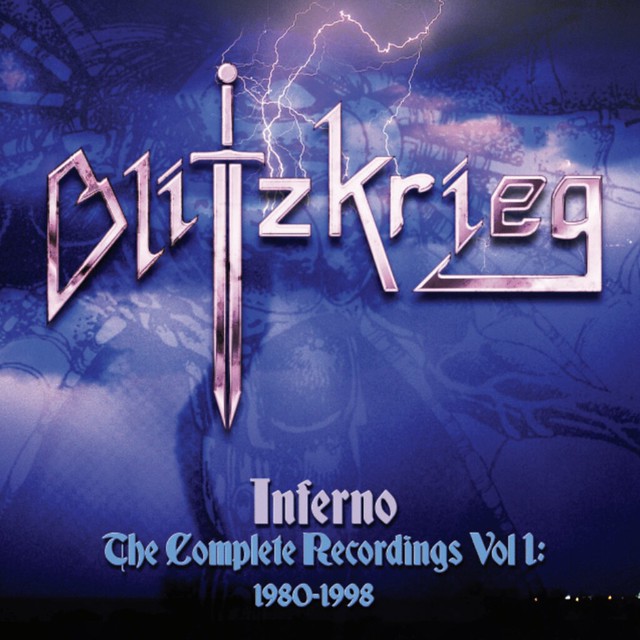 It took another decade for Blitzkrieg to release ‘Unholy Trinity’. 1995 wasn’t the best time for traditional heavy metal, with the land dominated by the combination of grunge and nu metal. Whilst it’s very much of its time, ‘Unholy Trinity’ shows a progression in the song writing on the debut release. Ross was joined by guitarist Tony J Liddle, drummer Sean Taylor and bassist Dave Anderson. Some of the songs are a bit uninspiring but there is the odd gem tucked away, including ‘Struck by Lightning’ and a cover of Venom’s ‘Countess Bathory’ which features Cronos sharing vocals with Ross.

More movement in the band for 1996’s ‘Ten’, with Ross and Liddle now alongside drummer Paul White, Steve Ireland (bass) and guitarist Phil Miller. It’s an album that opens strongly, with ‘Fighting all the Way to the Top’ a classic heavy metal track. ‘I’m Not Insane’ is well intentioned but crass, whilst ‘Court in the Act’ is surely a reference to the Satan debut album of the same name from 1983, although the riff is borrowed from Francis Rossi!

Skip across to 1998 and the final album of this collection sees the most ambitious move that Blitzkrieg ever made. ‘The Mists of Avalon’ saw Ross as sole member once more, with a completely new line-up alongside him. The album is astonishing. The cover of the album presents as a 11-year-old child’s drawing, but that’s only the start. Heading back to the knights of the round table, the opening track is ‘The Legend’, a 19-minute story that is segmented into a suite of music around the tales of King Arthur. How it must have been received in 1998 I’m not sure, but today it hasn’t stood the test of time very well, despite the excellent musicianship on display. ‘The Mists of Avalon’ is also a bit of a mixed-up release, with the Arthurian tales mixed in with the awful the ballad ‘Princess For The World’ dedicated to Princess Diana. It negates most of the good work on the album in five minutes of stomach-churning sycophancy. However, the album does finish with a laugh as the seven second song ‘I Was Having A Great Time And Stayed Longer Than I Should So When I Got To The Railway Station The Last Train Had Gone!’ which is literally two chords and the word “bastard” spat out in true Sean Bean style.

Whilst there are some rather ropey parts to each of these albums, ‘Inferno: The Complete Recordings Vol. 1 (1980-1998)’ does provide a full history of one of the UK’s better NWOBHM bands. The fact that Brian Ross continues with the band to this day is to his credit. As a piece of UK metal history, this set is worth a listen if only out of curiosity.