On their own right both Machine Head and Amon Amarth have sold out Academy tours around the U.K., the former having done so for decades now. So the next logical step is for them to step up into the arena’s of the U.K. and what better way to test the waters than joining forces as co-headliners! The tour opens at the Motorpoint Arena in Nottingham this evening so we at The Razor’s Edge had to catch the bands on this epic U.K. trek.

Kicking off the evening are The Halo Effect, a new band as an entity, having released their debut album just a few weeks ago. However all members were part of In Flames at various points and front man Mikael Stanne is of course also vocalist with Dark Tranquillity. It’s safe to say they are a safe pair of hands.

Starting with 'Days of the Lost' they immediately set out their stall. Primarily a melo-death sound the band draw other inspirations and there is often a whiff of mid-90’s Paradise Lost in amongst the riffs. The forty minute set highlights the bands debut album with the likes of 'Gateways', 'Feel What I Believe' and 'Broken Trust'. A great introduction to the band for anyone whose not cottoned onto them yet. 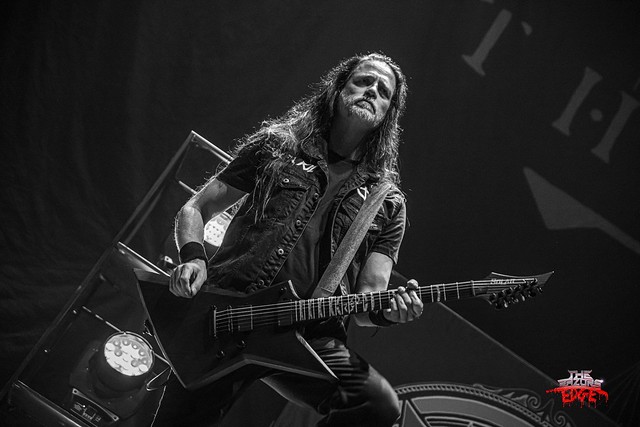 Amon Amarth's drum riser on its ever present viking crown sites proud, centre stage as the pyro flare and the band kick into ‘Guardians of Ashgard’. Bathed in a warm red light two giant Viking warriors tower over the band from each side of the stage.  Shortly after ‘Ravens Flight’ the Vikings are brought to their knees as they make way for two huge Viking long boats, this is a stage show of epic proportions! 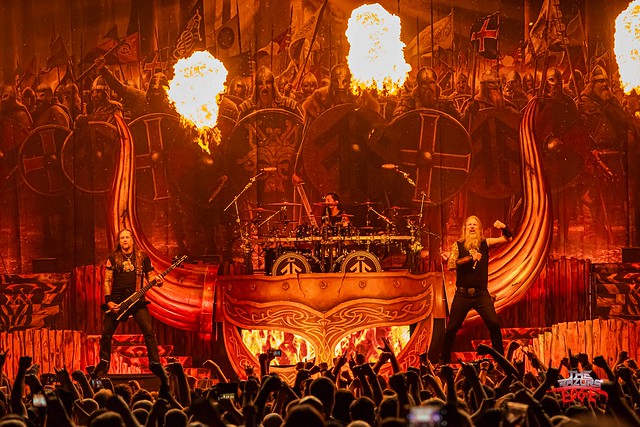 By now the crowd are a sweaty mess thanks to the heat of the constant pyro. However ‘Heideun’ is the first to do away with the flames opting instead for a confetti cannon which reaches the very back of the arena.

It’s a stunning set full of awesome Viking imagery and the brutal sound the band are renowned for. ‘Raise Your Horns’, the ultimate drinking song, closes the main segment of the show with a whirlwind of banging heads and pumping fist.

A thunderstorm then rages to kick off the encore, the stage set now filled with a huge sea serpent, its head moving, bearing down on the crowd as BOOM, the pyro goes off once more and the band kick into ‘Twilight of the Thundergods’.

With a pyro show like this, Machine Head have got to step up their game to follow. 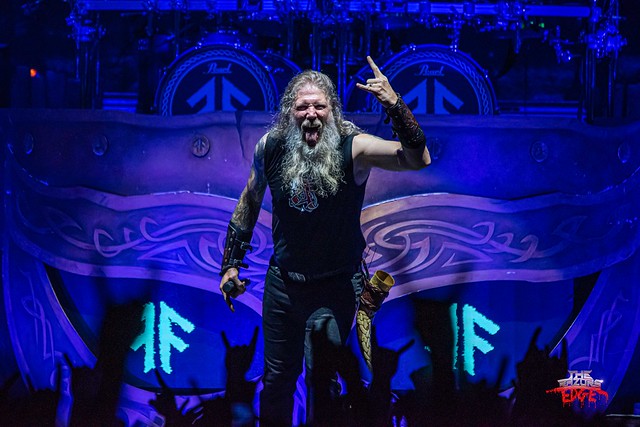 Opening with ‘Become the  Firestorm’, the atmosphere rises quickly as then the band tear into ‘Imperium’, Robb repeatedly calling for circle pits. His wish is the crowds command! Their surprise set at Bloodstock just a few short weeks ago was a taster for what is about to come.  ‘Now We Die’ and ‘No Gods, No Masters’ finish off the opening salvo.

The stage was supposed to be backlit by a huge digital screen tonight, but alas technical difficulties rendered that unworkable, so the band let the music do the talking. ‘I Am Hell’ and ‘Aesthetics of Hate’ get the crowd, already rowdy, in the mood for some good friendly violent fun.

With time against the band sadly ‘Locust’ and old time favourite ‘Ten Ton Hammer’ get dropped from the originally planned set list. But that does not put a dampener on proceedings as freedom rings with a shot gun blast! ‘Davidian’ followed by ‘Halo’ close out the evening.

Machine Head with a shorter time slot provided a huge, impactful set, Amon Amarth nearly burnt the place down with their pyro and a majestic hour and a half of Viking pillaging. Overall, one of the best shows of the year… so far! 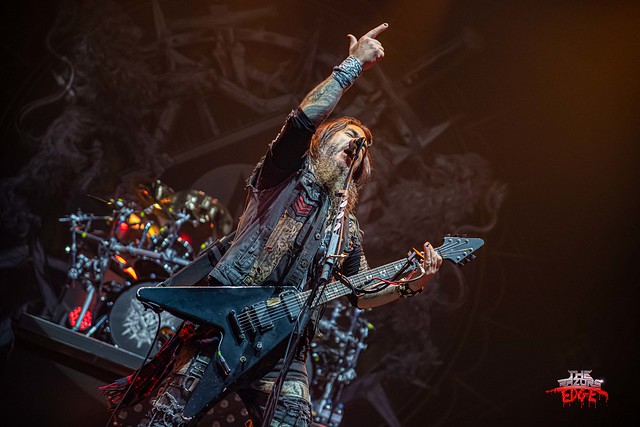 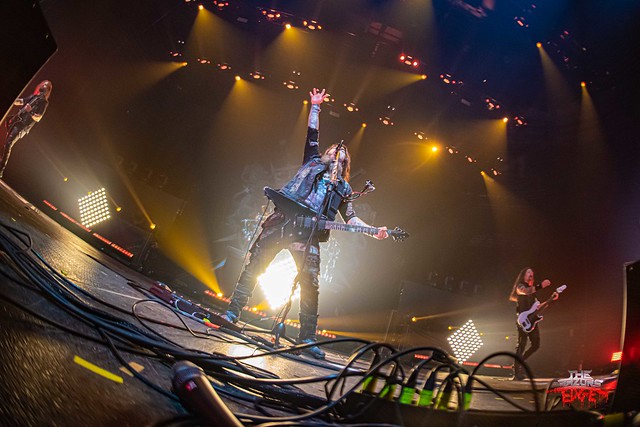 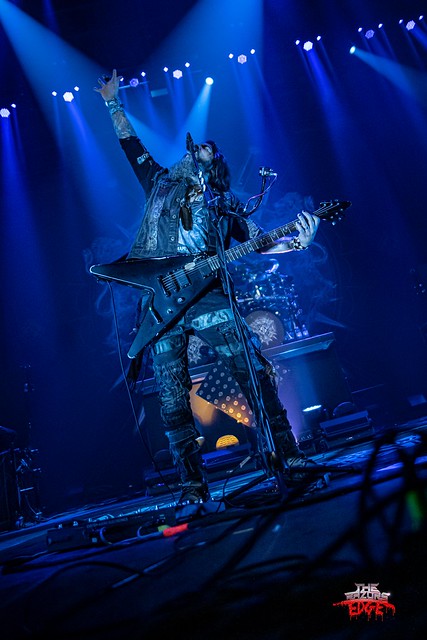 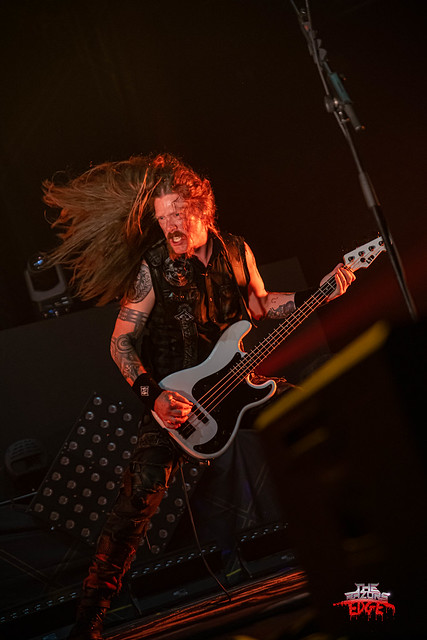 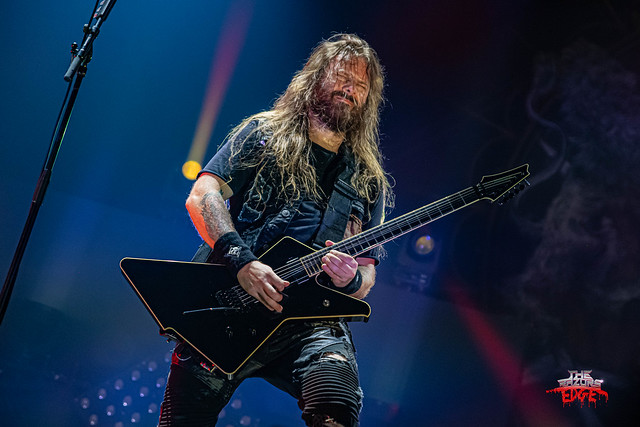