Alex: I'd go for In Utero because it's very diverse, has some heavier elements and also that Kurt Cobain melodic vibe that I quite enjoy.

Kieran: I'm going for Focus by Cynic, it's by far one of the most entertaining listens and has a very large range of textures. It has songs which are totally different from each other so I wouldn't get bored by 1 genre during my time on the island.

Jean: I would pick Dark Side of The Moon by Pink Floyd because it’s an album that I have never and will never get sick of.

Gabriel: With tears in my eyes watching Symbolic and Maiden's debut sink I'd probably go for Scott 3. Scott Walker's approach to this album is like nothing I've heard before, mixing classic jazz with ambient stuff and that old British style. It's definitely what I'd go for.

Kieran: Butchered at Birth by Cannibal Corpse. Extremely classic cover and would keep Jean from sleeping at night.

Gabriel: The original Reek of Putrefaction by Carcass, it's so fucking grimy and satisfying to look at.

Alex: Lateralus by TOOL, it's trippy as fuck.

Jean: A portrait of Geezer Butler in the nude.

Gabriel: The classic Red Bull Vodka that shit will nail me plus it tastes like candy. Perfect drink.

Jean: Jack n coke, gets me shitfaced and doesn't taste like shit.

Kieran: I would probably go for a perfect blend of something easy to get shitfaced to, while still tasting ok. Like red bull or monster with vodka. Last thing on my list would be anything with whiskey (I would repeatedly vomit).

Jean: I would save a scream bloody gore shirt from death because that album has great artwork and is my favourite death album.

Kieran: I would salvage my Edge of Sanity - Nothing but Death Remains shirt. Why? I have no fucking idea it just looks nice.

Gabriel: 100% my Disembowelment - Transcendence into the Peripheral long sleeve. Probably my coolest shirt plus it's a fucking insane album.

Alex: I’m gonna cheat the system a little, I would save my Sabotage vinyl as I love the reverse mirror effect they did.

Jean: Anybody because 3 sessions a week with my bandmates already drives me to insanity.

Kieran: Well, the last person on my list would be Gabriel’s sister, that would drive me dangerously insane. I would pick some friend who I find a little more bearable. 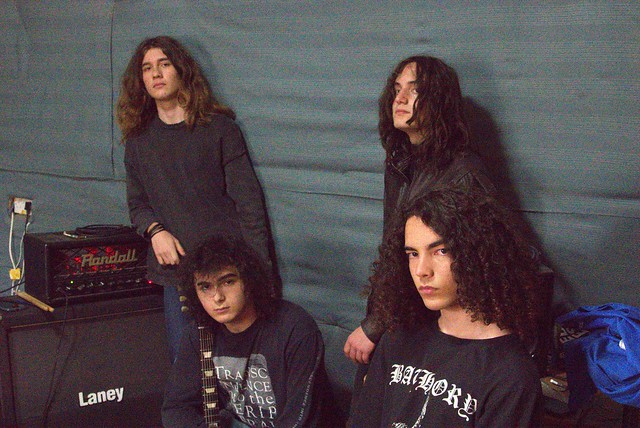 Jean: I would choose Cannibal Corpse from when they ate Moscow alive, Moscow looked so appetising and juicy.

Kieran: Metallica live in Seattle '89. Basic ass pick but the energy in that performance is great. I also like the small things they added between songs, like that To Live Is to Die interlude and Jason just jamming out. Great gig.

Gabriel: Well, asking a band member doesn't seem like the most sufficient route to safety so I'd address it to James Franco, maybe he can introduce me to Seth Rogan ... He's funny.

Alex: Flea of ​​RHCP he seems crazy enough to get me out of there.

Jean: I'd choose Roger Waters because he seems tall enough for me to use as a raft to get back to shore.

Kieran: The last type of person I'd trust with something like that is a musician.

Kieran: I'm gonna have to go Death fanboy mode and pick Chuck Schuldiner as I wouldn't have ever gotten into extreme metal had it not been for Death.

Alex: I hate to sound generic, but I would save Kurt.

Jean: Geezer Butler, I can’t think of any one musician I look up to more than him. but I would save Kurt.