Canada’s provocatively named hardcore punk outfit, Fucked Up, add to their frankly insane number of EPs with this new four-track release. Named after Shakespeare’s King of the Fairies from his Midsummer Night’s Dream, Oberon further demonstrates the Toronto native’s penchant for never wanting to be type-cast or boxed into a stylistic musical corner.

In telling the tale of the Fairy King, Fucked Up takes their listeners on a journey through the netherworld yet, rather than being the whimsical environment of the Bard’s Athenian forest, the music is reminiscent of something far darker. For those of you who have forgotten your GCSE English, Oberon is at odds with his wife, Titania and it is the King’s rage and fury that powers this EP.

Opening with the title track, Oberon is slow and sludgy, filled with fuzzed guitars and pulsating bass and is as heavy as anything you’re likely to hear this year. Damien Abraham’s vocals take on a Blacker tone as the song progresses, the mood of the piece becoming darker during the internalisation of Oberon’s point of view. The seven-minute plus duration of this opening statement sets the scene for the record, not just as an intense listen, but as a sonic feast. Early in the song you’ll encounter horns, sitting low and quiet in the mix, but present – possibly calling the guests to the far-away wedding – and other musical motifs that play into the idea of Oberon’s otherworldliness. 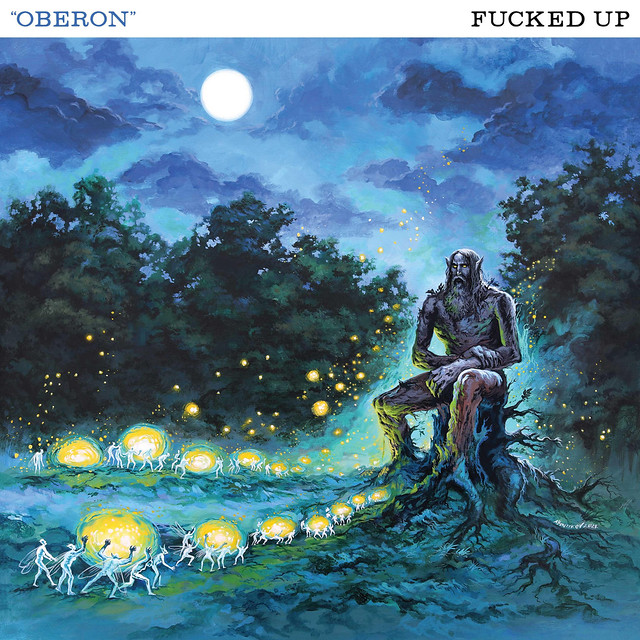 Strix pulls back on the darkness, lifting the mood somewhat with discernible hooks and a driving rhythm build around Jonah Falco’s drums and Sandy Miranda’s basslines. Behind the obvious musical progression lurks something else, something like the otherworld of Oberon, partially hidden but there if look close enough, all masked by a series of cascading riffs.

Mashhit maintains the heaviness of the EP but takes us off into a more industrial vein. The vocals are cleaner and the riffs are still fuzzy but it’s as though we’ve left the forest behind as the song closes with a more electronic sound.

To end things, Fucked Up have recorded their own rendition of Charles-Camille Saint-Saens’ The Aquarium; taking the playfulness out of the original and, instead imbuing it with the uncanny and a sense of foreboding. Replacing the lightness of the piano with the weight of guitar strings and adding an otherwise absent melancholy to Saint-Saens’ work means Fucked Up close Oberon’s story with the gravity it requires.

Having been operational since 2001 and with five-full lengths under their belts to go with the innumerable collection of extended plays, splits and seven and twelve inches, along with a commendably stable line-up from the get-go, Fucked Up are the kind of band who deserve more coverage than they get. Controversial name be damned, Fucked Up are the real deal when it comes to the Underground – consistently making interesting music and never letting themselves be labelled as anything specific.

You shouldn’t need an excuse to seek out new and innovative music but, if you do, let Oberon be your gateway into the world of Fucked Up.