The final night on their latest UK run saw Marillion bring a breath-taking show to the Capital which demonstrated once more why in their field, no-one can touch them. Even though Fish left the band in 1988, it astonishes me that people still refer to the band’s era with the Scot as their reference point. Marillion welcomed Steven H Hogarth into their team in 1989, and 33 years later have never been stronger.

It’s apparent even to the casual observer that Marillion’s fan base is amongst the most dedicated in music. The pubs are full of fans sporting their shirts, references to their famous weekenders where the band play three consecutive nights in one city, mixing the set list completely each night. There were plenty of foreign accents, with fans having travelled from Germany, Scandinavia, and Australia. They truly are that kind of band.

Of course, they wouldn’t be that band if they didn’t make superb music. Their 20th studio album ‘An Hour Before its Dark’ is still sitting in pole position for album of the year with me and many others. The anticipation of hearing the album in full was palpable, with none of the worry that came when Iron Maiden did the same in 2006 with ‘A Matter of Life and Death’. No, this is an album that demands to be played in full.

Support for the evening came from Canterbury folk rocker Luke Jackson. With four albums and a host of touring credits to his name, Jackson was a confident figure, no mean feat when performing in front of a partisan audience. The 28-year-old clearly has bags of confidence as his between song banter demonstrated. His music fitted in with the overall occasion, and his humour and humbleness worked a treat with a decent ovation. Tracks included the love tale ‘Cherry Picker’ and the haunting tale of the tomb of ‘Eliza Holt’, said to stalk the inhabitants of a new housing estate built on her original resting place. The man tours with Fairport Convention as well as solo shows across the country this winter.

It's a mark of respect to the band’s fanbase that five minutes before showtime, a member of the Marillion crew reminds everyone that filming the show through a phone tends to irritate those standing behind you and therefore urges you to plant that piece of glass and plastic in your pocket for the next two hours. It’s an admirable gesture, and one that is reasonably well observed, especially on the floor. It’s hard to resist taking a couple of snaps if you’re in the seats though, for the fantastic light show that unfolds as the show proceeds is simply captivating. To the point where each song provokes gasps from some of the audience, such is the thought and care invested in the overall visuals.

Taking the stage to a huge welcome, the five-piece are joined by the superb Luis Jardim on this tour, the percussionist bringing extra depth to songs that are already many strata deep. It’s no secret that we are about to be treated to the whole of ‘An Hour Before It’s Dark’, but nothing can prepare for the emotional tingle that is felt as Mark Kelly gently starts the introduction. It’s genuinely a” hair on the neck” moment, as Steve ‘H’ Hogarth begins the first suite of music with ‘Be Hard on Yourself’. Prophetic lyrics combine with sweeping symphonies, the soundscapes blending beautifully with the swirling light show.

The first song completed, it’s time for a little banter from H. Depreciating but always appreciative, the man can do no wrong. He deals with the odd good natured heckle, avoids any political commentary (his lyrics do that perfectly) and introduces ‘Reprogramming the Gene’ to roars of approval. 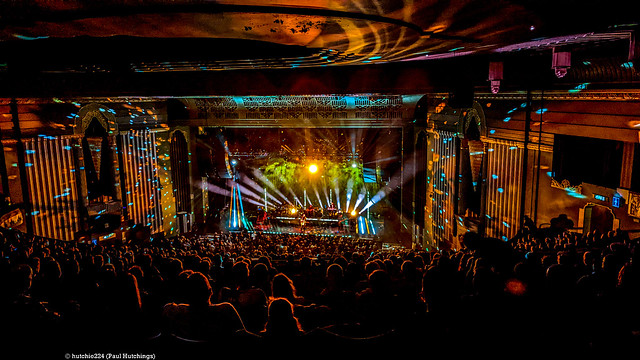 There’s little movement on the stage. Kelly and sublime drummer Ian Moseley are obviously fixed in place, whilst guitarist Steve Rothery is content to move back and fore to his pedal board, but little else. That just leaves H who twirls and dances when he can, and bassist Pete Trewavas, who has always been one of the more animated members of the band. Trewavas moves toward the centre of the stage on occasion, but this is a show which doesn’t require athletic prowess. Instead, he concentrates on his bass lines, his backing vocals and the occasional foray left. The music is the focus, at times almost another being that forms and dissipates as the songs are played. The band are truly lost in their art, and the audience are fully drawn in.

We are swept along by ‘Murder Machines’, one of the singles and almost poppy despite the many meanings that can be drawn from the lyrics, before a perfect The Crow and the Nightingale draws a standing ovation for Rothery’s beautiful guitar work. By now, it’s impossible not to simply sit and gasp as movement after movement are perfectly delivered. This is a smooth, cohesive band who know their parts, their contributions equally balanced.

‘Sierra Leone’ sees H make a poignant dedication whilst deadpanning about it being a “toetapper”, whilst final suite ‘Care’ is for “the people who cared for us” during the pandemic. It’s an album that drew much of its themes and lyrical content from the challenging times of 2020-21 of course, and the added poignancy for many is noted by the reverence that each song receives. Throughout the set, like the album, it’s Kelly’s luscious keyboards that dominate without overpowering, though Rothery’s clinical yet organic lead work cuts through magnificently. He truly is an underrated musician.

The climax of ‘Care’ sees a massive ovation around the almost sold-out venue. It’s well deserved, for there will be few finer shows in 2022. The odd tear is wiped from the eye, as the band embark on the second part of their set. They’ve already played for an hour, yet it seems like they have just arrived.

We’re treated to a smattering of songs not always played live. ‘Somewhere Else’ is gentle, embracing and draws you back into the fold. The music envelopes all, the lighting important but not overwhelming. H’s voice is still incredible, he tempers the highest notes but still hits everything he needs to with ease. Three from ‘Brave’ are also included, with ‘The Great Escape’ closing the main set.

Remerging to rapturous applause, it’s time for another suite of music. This time it’s ‘The New Kings’ – all four parts, from 2016’s ‘F.E.A.R.’ The predecessor of Brexit, the lyrics are even more cutting now than they were six years ago. As part IV – ‘Why is Nothing Ever True’ is played, the chilling lyrics hit their mark.

“Remember a time when you thought that you mattered,
Believed in the school song,
die for your country – a country that cared for you,
All in it together,
If it ever was more than a lie or some naïve romantic notion,
Well, it’s all shattered now,
It’s all shattered now”.

Marillion leave the stage once more, only to emerge for a final time. It’s singalong time, ‘Sugar Mice’ from the seminal ‘Clutching at Straws’, no less. H can sing it beautifully but needs to only remember the lyrics for half of it, as the choir in the stalls provide the rest word for word. For a minute you are transported back to 1987, the darkness of the words countered by the shimmering music. As it ends, there’s a feeling of euphoria. Elation. Exhilaration. Truly memorable, it was an honour to watch such master craftsmen at work. Possibly the most perfect two hours of the whole year.