Luke: Emarosa’s self-titled album, this record has stayed with me since I was young when it was first released. Every song speaks to me in a completely different way, either through relation or empathy.

Ben: Images and Words by Dream Theater, just because it's an absolute classic, and if i'm stuck on the island for long enough hopefully I’ll practice enough to be able to play it all

Ash: Messengers by August Burns Red. It’s one of the only albums that I love front to back and it got me through a lot of hard times too. Also introduced me to metalcore as we know it today.

Mitch: LD 50 by Mudvayne. Not only is it one of the Albums that got me into metal in the first place, but Ryan Martinie’s playing across that entire album is one of the reasons I picked up a bass to begin with

Luke: Monuments - Gnosis. Super abstract piece of artwork which would keep my brain from dissolving from boredom every time I laid eyes on it.

Ben: Pantera – Metal Magic, yeah you know the one with the weird cat thing!

Ash: Metallica - Master of Puppets. I had this on my wall when I was a teen, and there’s something about it that makes it iconic and instantly recognisable.

Mitch: Primus - Sailing the Seas of Cheese. It has a boat on it, and what more would I want when trapped on a desert island?

Alun: Probably Hate by Thy Art is Murder, I’d look at it and go hey it could be worse than being stranded on a desert island

Luke: Disaronno & Cranberry Juice. I am a man of refined taste. I’ll be honest, if this was on tap, I don’t think I’d want to leave.

Ben: Ribenna, because it's got my name in it

Mitch: Relentless Origin. My blood is practically 70% relentless anyway, plus with all the caffeine I could probably make a swim for it

Alun: Got to be a lager of some kind!

Luke: My custom-made Being As An Ocean denim patchwork jacket.

Ash: My rock n’ roll raver tee from Noisy. It’s so well made and would last a while.

Mitch: My BTBAM long sleeve. I performed close up magic for them as part of their rider at TechFest 2016, and they gifted me a sweet tee for it

Alun: My custom jacket with all the band patches I’ve bought over the years. I’m very good at sewing now

I think we should all say our partners…or Tom Hanks as he’s used to these situations. 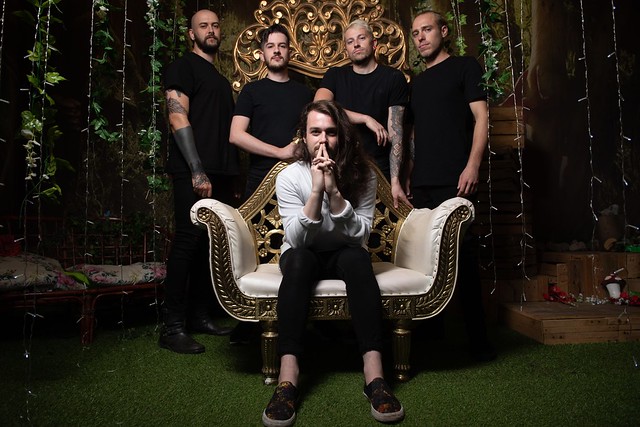 Luke: Vessel from Sleep Token, hoping he could perform one of his “rituals” and part the seas to come and save us.

Ben: Vocalist of Gojira so he can summon the whales to save us.

Ash: That vocalist from Harms Way because he’s a tank

Mitch: Look, I’m not a massive Iron Maiden fan, but Bruce Dickinson has a freakin’ plane and I want to go home

I think it’d be Ben, we’d have rump steak for days

Luke: Hayley Williams, without that woman I may have never discovered…ahem moving on.

Ben: The corn kid from Tiktok, he changed my life…and he really likes corn.

Ash: Tom Searle, his outlook on everything was so positive and he wrote sick riffs of course.

Alun: Animal from the muppets, he is drums