I frankly don’t recall reviewing many Splits in my time. That’s why something felt different to me when I saw this Split announced and made available between Gosudar and Malignant Altar, bands which I have checked out beforehand owing to my love of all things death metal and cavernous. It’s pretty interesting how each band follow similar patterns; both started around the exact same time, forming in 2018; both play a style of deranged and dirty death metal and yet they each originate from opposite ends of the earth; Gosudar being Russian, Malignant Altar being American. Knowing that I had equally enjoyed each band’s full length outputs I was very excited to see what both bands could deliver on with this unique collaboration together.

I find it rather interesting that, of the four tracks split between the two bands, Gosudar have the longest piece herein and it opens up the Split too. Both bands only recently released their debut full length works so I find it fascinating that, of the full 28 minute runtime, Gosudar’s first track is nearly half the entire duration this Split manages to offer. This being the case, Gosudar must have been very confident in their ability to provide fans with what they’re looking for and I have to admit, “Mortified Transformation” truly lives up to the hype the band wanted to bring. Utilising pummelling riffs, cavernous vocals and a pacing that enables the audience to easily follow along to what’s happening, Gosudar provide us with a soundscape that frankly I’d forgotten was as cacophonous as this Split demonstrates them to be. Their sound is one that strikes you head on and simply refuses to let up its barrage. If this Split is any indication of what Gosudar have planned for the near future, then I for one am very excited.

I just adore the violent nature that Gosudar have managed to bring to their sound throughout their portion of the Split. While their general pacing allows us to follow where they take us, there are numerous occasions during their performance where the intensity and speed at which their songwriting is thrown at us massively escalates, rendering their soundscape with a nihilistic, forlorn savagery. It’s no doubt aided by how the riffs aren’t simply these slabs of power, but how they manage to ring out against the backdrop of the record too. Riffs echo into the background, giving us an impression as to the true scope of Gosudar’s sound; it’s evidently much bigger than the band would  immediately have us believe and by applying this sense of echo to their performance, Gosudar only ramp up the ferocity by which their songwriting is delivered with. It’s as if the band can barely maintain their composure as they seek to hurl everything they have at you, you can feel the cracks and sinews forming and tearing the longer they play for. 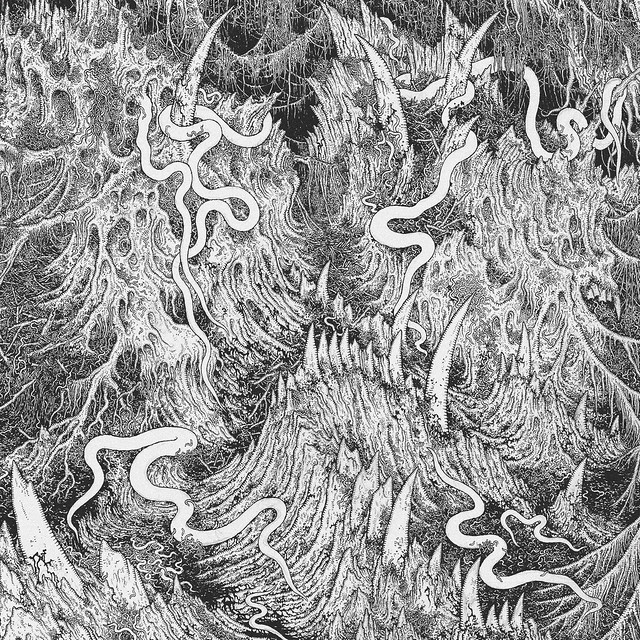 In comparison, Malignant Altar offer a death metal aesthetic that is considerably heavier where the bass is concerned, not to mention a vocal delivery that is much deeper and much more guttural. While Gosudar provided a rather total and enveloping soundscape, it’s curious how Malignant Altar offer up something that feels a little more raw and unrefined listening to the band play does feel easier as Malignant Altar don’t look to utterly destroy their audience through tone and a crushing soundscape. Instead it’s something more visceral, more piercing, utilising some symphonic elements which is a certainly a first for the band. It isn’t much but it’s nice to hear a new element the band may be looking to implement with further aspirations, towards a new album potentially? Malignant Altar also tend to play with a slower pace in mind too, this has enabled them to really bring the power not through a maddening soundscape but through the sheer weight their riffs may imbue our time with. Riffs feel fatter, solos perceived as more methodical creations as opposed to Gosudar’s rampant, schizophrenic-scaled onslaughts.

In conclusion, this Split is fully worth your time if you’re an avid fan of ruthless and maniacal death metal just as I am. It may be just under half an hour long but between Gosudar and Malignant Altar, they each make every single minute fully worth investing in. It’s also very interesting to see two bands, both of which are considered as part of this new wave of death metal, both implementing cavernous elements within their songwriting, and yet still produce two rather distinctly unique soundscapes throughout their performances. It just goes to show that no two bands really are the exact same when they listen to them directly side by side. Each of them released their debut full lengths last year and if this Split is to indicate anything, I am rather excited by what else they give us, potentially, next year. I don’t usually check Splits out but I may have to add them as a possible choice to my reviewing roster. It also reminds me to go back and listen, once more, to Gosudar’s full length record. That’s the sign of a quality Split.