10th December was the first anniversary of the sad passing of one of the Punk scene’s most enduring and beloved figures, Thomas Mensforth. As frontman of South Shields’ Oi! legends, Angelic Upstarts, Mensi steered the ship as the only ever-present from their inception in 1977 to his death from Covid-19 in 2021.

In commemoration of this fact – or just because they can – Cherry Red Records have complied all of the Upstarts single releases into a very welcome two-disc set, covering the 7” history of the band from their beginnings to the middle of the Eighties.

Tracks 1 and 2 originally saw the light of day in May 1978 and were self-released on the band’s own Dead Records label. After getting some airtime from John Peel, the original one-thousand unit pressing of The Murder of Liddle Towers sold out, leading to further collaborations with other, prominent independent labels. Telling the tale of the death of local boxer, Liddle Towers, while in Police custody, the song would set down a marker for the Angelic Upstarts as being unafraid to speak their minds. Backed by the more traditional Punk of Police Oppression, this debut 7” would be a fitting introduction to Mensi and company’s rage against establishment tyranny.

Jimmy Pursey of Sham 69 would be instrumental in securing the Upstarts’ record deal with Warner Bros, which would result in the release of debut album Teenage Warning in August 1979. Before the full-length hit the shelves, the band issued I’m an Upstart in April of that year and the album’s title track in July. I’m an Upstart slotted precisely into the era, a snotty, abrasive statement of intent that reached number 31 on the charts; while Teenage Warning, a little more sedate, but no less fearsome to the establishment managed to get to number 29. Their take on Cliff Richard’s The Young Ones as the latter’s B-side was no doubt greeted with cries of heresy. The Murder of Liddle Tower would be re-recorded for the album, establishing the Angelic Upstarts as a powerful and important voice in the Punk movement.

Less than a year later, in April 1980, and the band released album number two, We Gotta Get Out of This Place, named after a cover version of Mann/ Weil song popularised by The Animals. Much like The Young Ones, the Upstarts put their own spin on things, though produce a surprisingly faithful rendition of the classic. Police Oppression would get a re-record and sit just after the album’s lead single, Never ‘Ad Nothing, a combination of upbeat guitar and pummelling drums as the band, once again, act as a chronicler of the times. Tracks 9 and 10 are the second 7” release, with Out of Control being very much in the Oi! vein, while Shotgun Solution is much more traditionally Punk in its sound.

Another year and another album for the Upstarts, with 1981’s 2,000,000 Voices. A switch of bassist saw Glynn Warren replacing Steve Forsten for an album that would produce four singles between August 1980 and June 1981. Last Night Another Soldier keyed into the concerns of many artist during the period and looked at the Troubles across the Irish Sea. The heavy subject matter belied by the somewhat upbeat and jaunty music. The second single, England, is an acoustic tribute to home which caused the band to get flack for displaying a modicum of patriotism; Mensi responded by asserting the country belongs to Us, rather than the gutter press or gentry. Neither B-sides found their way onto 2,000,000 Voices, with both The Man Who Came in from The Beano and Stick’s Diary being entirely representative of the Upstarts’ output of the time.

Kids on the Streets would find some chart success in January 1981 but it was the follow up, and final single release of this time, that showed Angelic Upstarts were still a dangerous, fiery beast. In the same mould as The Murder of Liddle Towers, I Understand revisits the theme of death in custody and addresses the case of Richard Campbell. In recognition of Campbell’s Rastafarian roots, I Understand is a reggae beat, with backing vocals provided by Jake and Jim of Stiff Little Fingers. Never Come Back – which is also absent from 2,000,000 Voices, maintains the bass-heavy reggae stylings of the primary track, whereas Heath’s Lament sees Mensi reading poetry inspired by the first miner’s strike and tells of the divisions experienced by those previously tight-knit communities. 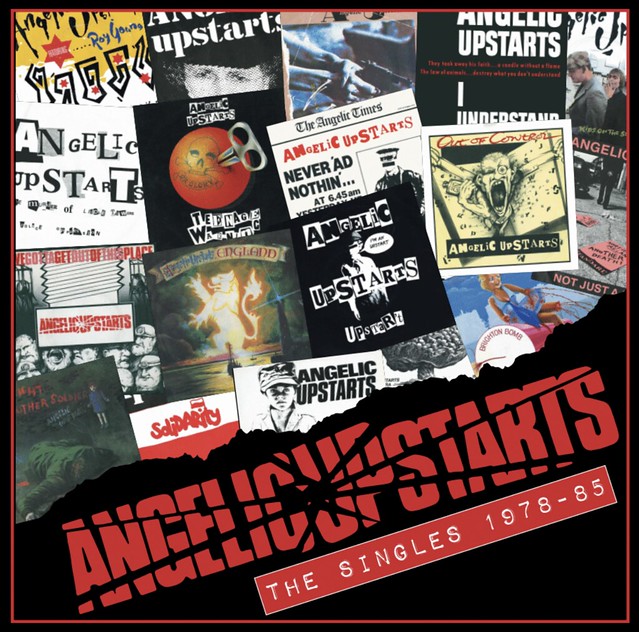 The Still From the Heart album came out in April 1982, generating just two single releases. Different Strokes and its B-side, Different Dub, are the final two tracks on Disc 1 of this collection and feature Roy Young as lead vocalist of these reggae influenced songs. Next release and first tracks of Disc 2 would see the Upstarts reverting back to a more familiar sound for Never Say Die, but that’s not to say there isn’t a fair amount of experimentation going on as the band adopt an electronic sound for this and flip-side We Defy You.

Continuing with the idea that Art is inspired by the era in which it is created, Victory for Poland is the Angelic Upstarts’ contribution to the 1982 fundraising album, Wargasm, and released by the No Nukes movement. Featuring songs by the likes of Mau Maus, Infa Riot and the Dead Kennedys and more, the Upstarts’ track would not be available on any other release at the time and returned the band to their core sound.

You may be picking up the vibe that Angelic Upstarts don’t have a great deal of time for the Conservative Party and the first 7” form 1983’s Reason Why album is a musically jolly dig at Margaret Thatcher, Woman in Disguise. Both Lust for Glory and 42nd Street go heavy on the Oi! and you can hear the thickening of the Upstarts’ sound through the addition of a second guitar for this record.

Of all the band’s political statements, Solidarity is probably the most heart-felt and emotive. Opening as a acoustic number and building into a rich symphony of keyboards and guitars, this is the natural bedfellow to Victory for Poland and is, again, a chronicle of the times in which it was written. At Rebellion 2022, when the band played their tribute set to Mensi, John Rosbson of Gimp Fist, guested, leaving hardly a dry eye in the house.

The additional tracks on the Solidarity single – tracks 8 to 10 here – would not feature on the original pressing of Reason Why which is a shame as they show, again, the breadth of the Upstarts’ creative urges. Five Flew Over the Cuckoo’s Nest is some straightforward Oi!; Dollars and Pounds see Mensi delivering more poetry about Capitalism and Don’t Stop is something of a psychedelic jam.

Prior to the release of album number six would be the five-track EP Not Just a Name in early 1983. The title track has a New Wave influence, whereas The Leech is a more traditional Angelic Upstarts stomp. Live versions of Leave Me Alone, The Murder of Liddle Tower and of The Clash’s White Riot complete the track listing, paving the way for 1984’s Last Tango In Moscow album.

Only one single was release from this record, Machine Gun Kelly tells the tale of a trigger-happy police officer and advises to avoid whenever possible. It features some rather Metal guitar licks and hooky riff; backed with Paint it Red and There’s a Drink In It, neither of which would be included on the album.

For the final tracks of this compilation, we visit the hugely controversial Brighton Bomb. Released in 1985 and dealing with the detonation at the Conservative Party conference, it attracted much ire from the press; admittedly, the single’s cover art didn’t do it any favours. So controversial was this song that the Power of the Press album omitted the song in its entirety, though it did include both B-sides Thin Red Line and Soldier. Objectively, these three songs further demonstrate Angelic Upstarts’ commitment to their craft, with Brighton Bomb eschewing the temptation to be gratuitous and being rather gentle in its composition.

This two disc compilation represents a purple patch for Angelic Upstarts’ creativity, with a new album being released every year up until Blood on the Terraces in 1987. Following this, the Upstarts would slow to a crawl, with a decade between Bombed Out and 2002’s Sons of Spartacus, another nine between it and The Dirty Dozen and four more until the final Bullingdon Bastards.

They still toured and wowed audiences with their powerful live shows and Mensi’s infectiously warm and self-effacing persona. At North West Calling on 2018, where the band were performing Teenage Warning in its entirety, he would be making jokes about needing glasses to see the setlist.

On the 6 August 2022, the Rebellion family paid a final public tribute to Mensi, finishing with members of his family joining the band for I’m an Upstart. Listening to the forty-four tracks on offer in this compilation reminds you of the power and passion of the band, spear-heading a movement yet never once losing sight of where they were from and what they stood for.

A last tango, perhaps – but a rousing way to end the dance.