Deiquisitor. One of the many bands that make up what I call the Danish Extreme Metal Cinematic Universe, Deiquisitor shares members with Ulcerot and is one the many, many bands of this community that have been churning out consistently quality material for, upon this album’s release, right on a decade now. Formed in 2013 out of Sjælland, the band have been very active and have only thrown out one form of release after the next. Their first full length work in 2016, a self-titled record, released after two years of EP and Demo releases, a record that was also followed up by another set of EP and Demo releases. Album two, Downfall Of The Apostates, in 2018, was very quickly followed by album three, Towards Our Impending Doom. As it stands, Apotheosis is the longest gap Deiquisitor have since had in regards to album releases. I remember thoroughly enjoying their last EP, Humanoid, so I was absolutely raring to go when I learnt Deiquisitor had a fourth album prepped for release.

If there’s anything that can be said from the outset, it’s the totality of the band’s choice of guitar tone. The fact that they don’t open up their new record with a massively blinding onslaught of sound makes it feel all the more satisfying. Deiquisitor enable us to get immersed very easily, very quickly without it being drilled into our skills believing this is what we should be doing. I don’t know whether it’s the amount of bass that’s being poured into the guitar work but you cannot turn your attention away from the riffs, not from the songwriting that the band hurl our way. Turn your head left and right and back and forth, the guitar tone is always there as this complete and absolute force shrouding everything the band otherwise have in store for us. It’s been a while since I encountered a tone that was as powerfully massive and dense as Deiquisitor’s offering here.

While the band absolutely have speed to play with, much like their general approach to death metal and songwriting, they aren’t always vying for unrelenting speed and intensity at every waking moment of their performance. Tracks may dip here and there, ramping things up with great swathes of energy, riding oscillating wavelengths of ferocity, but the overall aim of Deiquisitor seems to be geared towards providing a trembling sense of doom that we’re gradually heading unto. The aforementioned guitar work only heightens the impact such a pacing has as well; had the band written music that was solely focused on speed and providing that more vicious assault, the impact would have been lesser as the band would otherwise have been unable to let the impact of their riffs stew as strongly as they would have liked, as they have been able to accomplish herein. 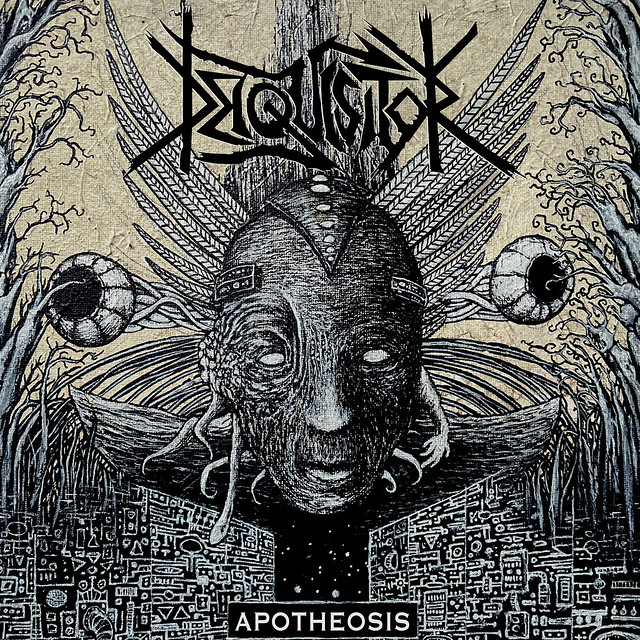 Offset against this wall of sound we have the drums. Owing to how tonally dense the general soundscape is, it actually works for Deiquisitor’s advantage that the drums are mixed the way they have been. Had the drums been the usual thick affair that demonstrate bass and acoustics coupled by a lower pitch, they’d more than likely become lost within the instrumental mire; their impact becoming dramatically lessened by the very nature of what this record is. In terms of might, the drums may not exhibit too much innate power immediately even as blast beats become thoroughly employed throughout the songwriting. However, they provide ample intensity as they become the foremost element determining the speed and strength by which the instrumentation comes at us. You can feel the bass emanating out from the bass drums as their rapidity picks up, but also the loosely strung Tom-Tom drums emitting that tinny resonance that becomes so necessary, picked up easily against the dense wall of sound the riffs are otherwise purporting.

If there’s anything to be said regarding the band’s performance, it’s how they managed to craft a record that never stops for a moment. Now, throughout the record, there are plenty of instances where the songwriting does slow down and you’ve got those more relaxed periods where the music is more gradual and steadier, but it never outright stops nor do we get breaks in any respective track that then open up unto completely unique sections. Once a song gets going, from the first second onwards, then that’s it, that’s the track you’re going to be assailed by. That’s why the diversity in pacing is so necessary, for all intents and purposes the band have their eyes dead-set aimed at providing that constantly, barrelling tidal wave of power. The riffs will change and morph into whatever the band are needing at any particular moment but it never stops for any moment, becoming this traversing, meandering snake that’s able to slither it’d way through a track’s entire runtime without coming across as overlong or breathless. It’s cleverly done.

In conclusion, Apotheosis is yet another example as to why Danish Death Metal has become such the explosively successful niche of extreme metal within the last decade. Deiquisitor come here with their first full length album in four years and, while we’ve received two Eps, Demos and a Split in that time, it feels like Deiquisitor have hardly been away from the album game, jettisoning us right back into the tonal carnage that the band are renowned for delivering on. From the word go, it’s a constantly shifting and never ending barrage of extremity as the band hold nothing back and completely forgo any notions of serene styles, opting totally for a punishing and crushing soundscape that’s not only going to hold you for the duration of your first listen, but any subsequent listens going forward. There are a good slew of danish extreme bands but Deiquisitor always seem to be left to the wayside; Apothesos is an album that suggests otherwise. Keep your eyes on these guys.