When I first heard Conjureth’s previous album back in 2021, Majestic Dissolve, it really took me aback with how ruthlessly relentless it was. Forward another two years and Conjureth return with another slab of primal death metal, eyeing up an early January release for 2023. The band are a pretty recent creation, having formed back in 2018 who quickly assembled themselves to put forth two Demos and a Compilation by 2020’s end. Not long afterwards, the aforementioned Majestic Dissolve was released as their first full length metal record to much praise. With The Parasitic Chambers, the band seem poised once more to give us yet another offering of whiplash-inducing extreme metal. Let’s delve further into this record and see what exactly it’s got to say for itself.

I like how the band hold nothing back from the opening seconds onward; once that initial audio sample is through with the band hurl us straight into the mire that is their soundscape. If anything, this is even more chaotic and uncompromising than the last album they gave us; I remember it well. Whenever you think the riffs are going to move in one direction, the band immediately change it up and take us somewhere utterly different. It’s a record that doesn’t take anything for granted, your attention being one such thing. By ensuring their songwriting is as devastating as it can be, they help guarantee their audience will sit through this album from start to finish owing to the innate unpredictability such decisions regarding the songwriting has had on our experience of The Parasitic Chambers. Riffs here are as technical as many band’s solos, surpassing even the most technically-minded extreme metal bands of the age.

But just as much credit lies with the production as well; the riffs and songwriting may harness this diabolical immensity but it’s only because the production has enabled it the space and scope to allow the sound to move in whatever direction is needed. This is a gigantic sounding record, not due to the guitar techniques or crushing tones for once, because you can feel the walls of this record stretching back further and further to the point where it feels like Conjureth can’t do so anymore; then they do just that. The riffs explode with energy, not through speed or vitriol, but by the unshackled malice they’ve been applied with. It’s as if Conjureth set no filter or bondage to their sound and wanted their riffs to venture forth unimpeded. This decision has resulted in a guitar sound that completely dominates the album and while some may detract from it a record that overwhelms the rest of the band’s performance, individual subjectivity cannot deny the power The Parasitic Chambers possesses. 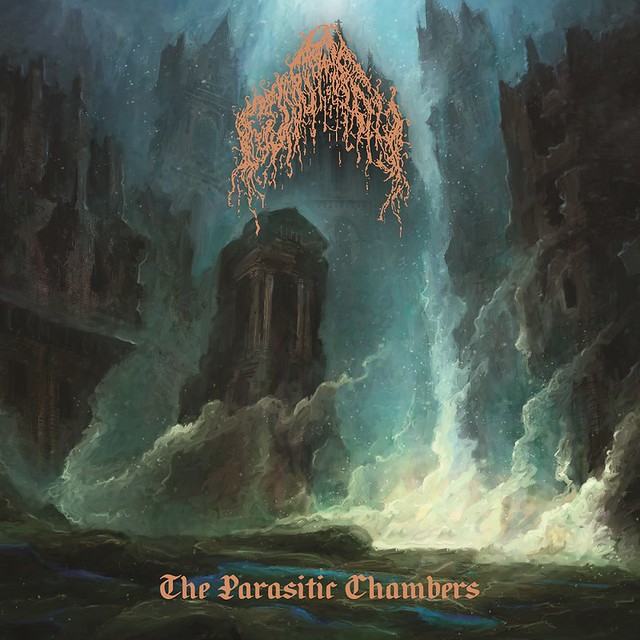 Much like the riff work, the drumming is just as mercilessly relentless. What I appreciate regarding the drums is how they seem to be the force that’s keeping the band rooted to the ground; a one-eighty degree turn from how many extreme metal bands operate. While the band are employing blast beats and more violent displays of drumming that feel especially heightened during the band’s more intense periods, it never feels like the drums are looking to escape our grasp in the way the guitar work is striving to achieve. The bass drums are prominent and the impact the bass pedal is able to conjure never feels obscured by the swirling vortexes that were otherwise being assaulted by. The crazier moments the drums offer up are powerful, but it isn’t long before they revert to something more rudimentary. The drums are constantly working away to keep our attention level-headed, so that we aren’t at risk of floating away with the maniacal songwriting.

I liked how the vocals operated in the same way the riffs have been applied to this record. When you’re listening to the vocals herein, not only will you be taken aback somewhat as to how eligible they are; you’re also going to experience their tenacity with surprising clarity. Owing to the chaotic nature of this record it could have been very easy for Conjureth to merely let the vocals get caught within the mayhem of their performance, instead the band saw to it that their vocal performance could be inferred and received with general ease. The vocals may not be all too easy to discern where specific lyrics or syllables are concerned, but we, as listeners, can absolutely identify our capability to follow where the lyrics are going and how they’ve managed to insert themselves excellently into an otherwise nightmarishly whirling record.

In conclusion, Conjureth’s The Parasitic Chambers is a roaring and maddening ride that races from start to finish; only in the closing track does the album at last apply some brakes and unsurprisingly too since it is the longest track as well. From the opening seconds, Conjureth are gunning for your throats at all times and there’s hardly a moment where they choose to relax. This could have become a record where the type of production could have considerably hindered the band’s ability to play and exert their performance; the choice to apply their record with this sense of ground beneath its feet, I think, was absolutely essential. Had the record simply consisted of that spasmodic approach to riffs and songwriting, and then applied it to the rest of the album in general, it could have resulted in a record where nothing felt grounded. But, on the whole, this is a breakneck paced album that will delight and annihilate for every second it’s playing for. A worthwhile listen.