Here we have an album that is one way to start up the new year in style. Descent, Australian extreme metal that sees a curious merging of death and black metal with Hardcore style, come to us with their sophomore album release. Formed in 2015 out of Queensland, the band released a Demo practically straight away however it would be a number of years before Towers Of Grandiosity, released in 2018, would at last give prospective fans their first real taster of what Descent were all about. Now, with another four years behind them they return with another slab of metal from down under in the form of Order To Chaos. I had this band on my list to check out so I thought I may as well see what Descent were indeed all about. This is Order To Chaos.

Since we’ve got less than 30 minutes runtime going on here, the band waste absolutely no time in subjecting you to all the accumulated malice this record holds in store for you. What I really took to heart early on was how completely savage and piercing the riffs are here, the guitar work delivers a crushing blow to your senses that much we can ascertain but there’s a dimension to the riff delivery that sees the band really target and single out your ears for what is in fact an uncomfortable and grating experience. I say “uncomfortable” in a positive manner however, this is a record that isn’t satisfied at holding your hand and ensuring your time with Descent is buttery smooth. The record thrashes you around, it beats and distorts your being and it has zero intention of seeing you come out of its ending sequences unscathed.

What drew me to this uncompromising sound most of all I believe, was the unusual application of a Hardcore production aesthetic that’s mingled in rather well with the band’s otherwise blackened death metal songwriting. As you’re going along throughout the record you’ll pick up on the blackened affair, the blast beats are here in force but it’s always got this underlying Hardcore vibe going on in the background. It’s almost like what would happen if you took a Hardcore sound and pushed it to its absolute limits, or a demonstration of how else blackened death metal can have other elements incorporated into its minutiae. It’s like looking at extreme metal such as this, from a different angle. But it’s only in the production that the Hardcore element can be felt, there’s nothing superfluously Suicidal Tendencies or the like happening here. It’s very clearly a work of extreme metal, best exemplified through the instrumental aspects. 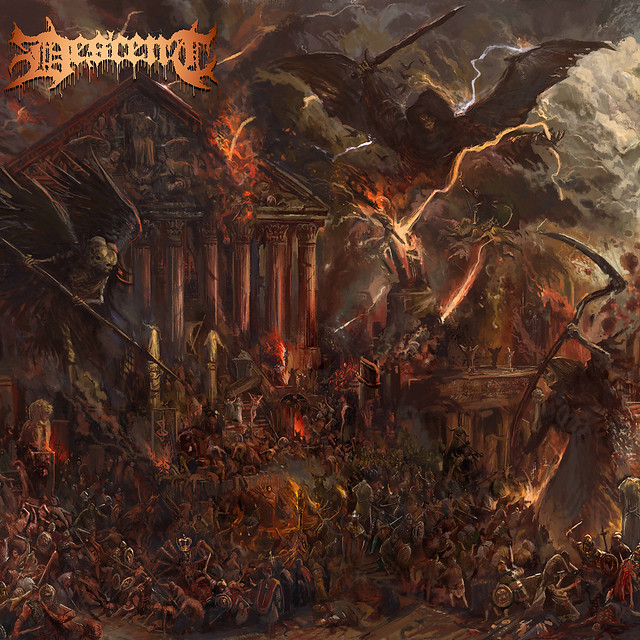 Vocally it’s one of the more penetrating and visceral performances I’ve heard in a little while. When I mentioned the uncomfortable experience earlier on, it’s primarily down to how the vocals have been applied to the record’s mix. For the most part the vocals sit pretty nicely within the riffs and drumming giving us a performance you’ll come to acknowledge as something that’s pretty rudimentary. But then you get sequences where the vocals will suddenly rise half an octave and you get these searing, banshee-like cries without the syllable longevity and it’s striking how it feels primed to molest and ardently caress your audible senses. It’s like the vocals are preciously reaching out of the album’s breadth and making you a part of its runtime because, they’ve broken down a type of fourth wall if you will by making you so aware of the vocal capabilities.

I feel like the drums, in the context of this record and how the rest of the album is directed towards us, are played and mixed into the album in such a way that they provide the levity and breathing room the audience would require. It’s exceedingly apparent that this is not a happy album, it’s not a record that is going to see you dancing through flower fields or help you host a smile across your face. The riffs and vocals and production craft a record that is conditioning you to feel crushed and in total despair. Compare this with the drumming which feels light, not so overtly taut and really allows you to feel those blast beats without them dominating the general soundscape. Even while the riffs are barrelling down at you, you’re always able to pick up on the drums and how their intensity paradoxically eases your experience of the record. The drums are as entertaining as you’d want them to be but, they serve also to alleviate your mind from what is an already ruthless performance.

In conclusion, if you’re after an album that doesn’t hold your hand and will absolutely rip your head right open then Descent might be the band for you. Seeing a release come New Years Day, Order To Chaos is sure to bash your senses back into your body and all the more so if you’re suffering any hangover following the previous evening’s celebrations. If this album doesn’t wake you up properly, I’m unsure if anything will. It’s a record that sports this conventional fusion of blackened death metal with a Hardcore aesthetic and frankly I wouldn’t mind seeing more of these odd combinations moving forward into the future. An album that is guaranteed to drag you kicking and screaming into 2022, Descent are an uncompromising band whose likewise sound is bound to bring in quite a few new fans. Australian extreme metal that binds you in as much as it spits you out.