Album Review: Twilight Force - At The Heart Of Wintervale
Reviewed by Richard Oliver

Twilight Force are a band known for their excessive and bombastic take on power metal and At The Heart Of Wintervale, the fourth album from the Swedish band, sees the band continue to push the bands symphonic power metal sound to greater excesses and wonderfully ridiculous amounts of pomp and majesty but the difference with Twilight Force is that it is all done with tongues firmly in cheeks. Twilight Force know that power metal is a ridiculous genre and they are determined to have as much fun with it as possible and that is the absolute joy of this album.

Although this is definitely symphonic power metal, Twilight Force like to term their sound “adventure metal” and to be honest that is a perfect way to describe their sound which is parts power metal, bombastic symphonic movie score and sickly sweet Disney soundtrack. It is metal about as lightweight as it gets but the musicianship is absolutely stunning with speedy guitar riffs and neoclassical lead solos intertwined with a furious rhythm section and some absolutely over the top yet wholly impressive orchestrations as well as some touches of medieval folk music. 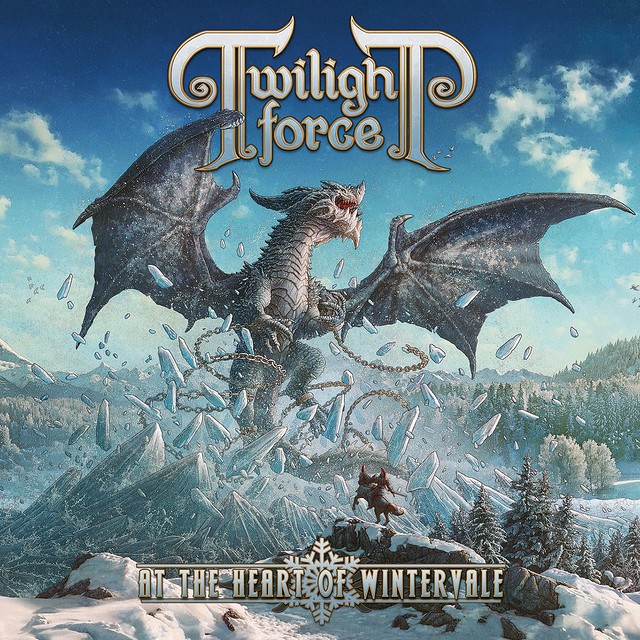 One of the best weapons in the bands arsenal are the vocal talents of Alessandro Conti or Allyon who is easily one of the best singers in power metal and he continues to impress with this being his second album with Twilight Force. The album is made up of nine songs with a mix of lengthy and majestic epics such as Highlights Of The Elder Dragon and The Last Crystal Bearer alongside more concise blasts of sweeping power metal such as Sunlight Knight, Twilight Force and the album's title track.

At The Heart Of Wintervale is power metal taken to its bombastic limits and should 100% appeal to fans of the genre. The band have clearly had a blast writing and recording these songs and the fun nature of the music is completely infectious. It is clear that, unlike some other symphonic power metal bands who take what they do a bit too seriously, Twilight Force have fun with it and make an album that is completely cheesy and silly is also a masterclass in epic symphonic power metal. If you already despise power metal then this album will make you see red but if you love the lighthearted and melodic side of metal then I cannot recommend this album enough. There is so much cheese on offer here that you will be digging crumbs of grated cheddar out of your ears after listening.