I've never had the pleasure of listening to Majesty before this review, so I’m totally in the dark. I hope this review enlightens you because if you’re like me and  you've not heard them before, you are wrong.

We have all heard a band like Majesty before. All I was told in advance was heavy metal from Germany. That’s all you need to know. The visions created in your mind of what a German heavy metal band are like, is close to what is delivered on ‘Legends’, but with a slight twist.

They have a rock solid foundation of power metal that is bang in the middle of early Helloween, Running Wild and Dragonforce. Sophisticated guitar riffs laid over a rhythm section as tight as two coats of paint. Plenty of double bass drumming played with Swiss watchmaker precision and a classic metal voice draped over each song. Sing along choruses a-plenty and more than enough devil horn throwing revelry to please the whole of Wacken on a dark night. 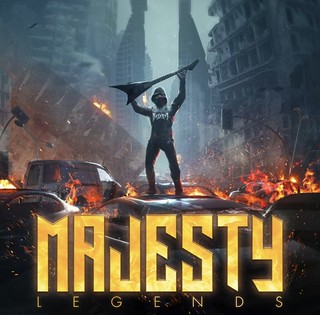 The slight twist comes in the form of the keyboards. As you'd expect, the traditional Euro keyboards are front and centre in the mix. Playing in harmony with the guitar riffs. Nothing unusual about that and for half of the tunes on this album that is the pattern of the song writing. The other half of the album, the keyboard player changes tac. The sound of the synths changes to resemble a 90's rave, a commercial 90's rave sound, like, 2 Unlimited, no limits indeed. It’s a curious mix, power metal and dance. One that has curious results. Not sure how your average power metaler feels about this collision of sound, but as I said, it's the twist.

This is a concept album and I was able follow the theme but not the story in detail. Apocalyptic war zones and humans rising up to resist an evil force is all well and good and it fits with the bands music.

Over all I listened to it happily and understood where they come from and the crowd they would attract. If you like this type of metal, you’ve probably own or like Majesty already and have already made your mind up. How much further this album will push this genre of music? Time will tell, but I'm sure on a late time slot at Wacken they will be treated like gods to the few who stay up late, long after the metal hordes have gone to bed, and praise the Metal of Majesty.

Majesty's 'Legends' is available in all good retailers and streaming services now, and you can view the lyric video for 'Burn The Bridges' below.