“Not all those that wonder are lost”. - JRR Tolkien

This quote form JRR Tolkien is the genesis for this album, and Visions of Atlantis have thrown themselves into the concept with vigour and force. All the songs on from this symphonic metal album have this thread running through them.

Not only do all the songs and lyrical content take the listener on a journey, the band have gone all out to synchronise with the ideas of the story. Album covers and photos show sunken galleons and lost smuggler caves and the band have gone full cosplay, with nautical dress and pirate paraphernalia on full show. 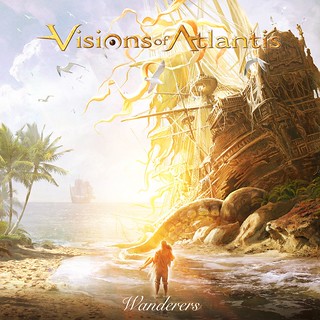 Could Visions of Atlantis do the same for symphonic metal as Lacuna Coil did for Nu-metal?? Much like Lacuna Coil, the vocals are not split equally, Clementine Delauney easily gets seventy percent of the vocals. Her operatic voice is used sparingly, but the high notes are hit expertly. Her male counterpart, Michele Guaitoli, has a smooth voice that compliments nicely.

The guitarist easily has the best job in this band, holding power cords whilst the keyboard grips the attention of the listener, with strings, brass and tin whistles all featuring. Only for all of that to stop come solo time, where the symphonic sound is stripped back and Herbert Glos takes centre stage.

I can see the stage show in my mind’s eye, drummer on the right, keyboard player on the left, with a staircase leading down from a shipwreck and a costal backdrop to fully engage the crowd. A good fun album that you can put on and enjoy with no troubles at all. Just check the shipping forecast before you do.

Visions of Atlantis new album 'Wanderers is out now on Naplam Records.