Saturday at this year’s Bloodstock had the potential to be a complete disaster weather wise. If the constant threat of rain wasn’t enough the winds were picking up. At first it was just the giant TV screens that were lowered to stop them swaying in the wind, but not long after the whole light rig on the main stage had to be lowered to keep both it and the fans safe, postponing any action for a period of time.

Prior to the weather kicking in, Saturday had started with a bang. Evil Scarecrow had the fans dancing in the main arena. Crabulon and Robototron, by now established crowd favourites, saw a wave of humans doing the most bizarre dances you wouldn’t expect from a heavy metal crowd. Dust Bolt over on the Sophie Lancaster stage gave the fans a thrash masterclass whilst The Wildhearts had the fans jumping about back in the main area. 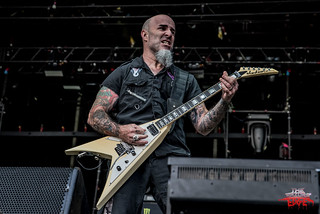 It was at this point the weather struck, and because of the delays Cradle of Filth’s set was initially postponed prior to being moved to the Sunday. When the wind’s dipped Anthrax came on, a little later than planned, for a shortened 50 minute set of classic’s. Joey may look old, but the energy levels from him and his band mates never cease to amaze. ‘Got The Time’, ‘A.I.R’ and ‘Indians’ all met with a rousing response.

As the sun dipped below the horizon this years controversial headliners, Parkway Drive, took to the stage. From the unlit shadows, figures carrying torches (flaming rather than electric) paraded out before the band were lit with spotlights. Whilst they may not have been the traditional Bloodstock fan’s choice, their pull was huge, the crowd for them rampant as the band went through their set. Pyro is the name of the game with Parkway Drive and their show did not disappoint, even winning over some of the most ardent protestors. 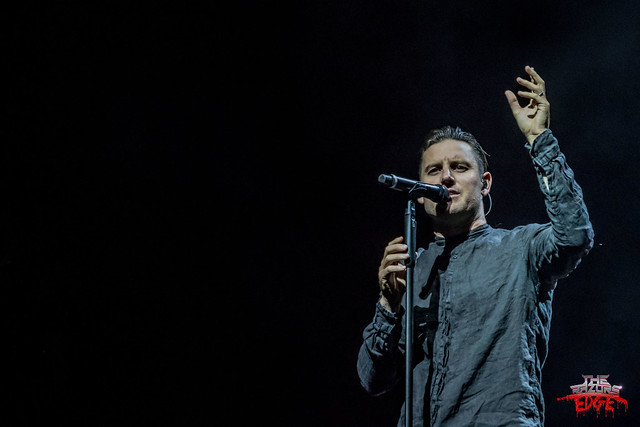 As Sunday dawned, the winds had died down, thankfully, but that did not stop the odd rain shower or two. Anyone in the main area for Aborted’s set got an absolute soaking. Resin opened the Sophie Lancaster stage, their usual grunge fuelled revelry accompanied by an orchestra for a majestic set.

Whilst Hypocrisy and Soilwork gave us a death metal by numbers show over on the main stage, Witch Tripper offered an alternative on the Sophie Lancaster stage. The Mansfield trio’s stoner rock, blues fuelled vibes were a refreshing change. The former Newblood alumni packed out the second stage and damn near stole the show on the final day! 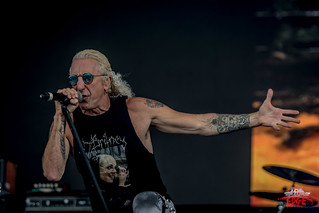 Dee Snider proved he is the ultimate showman, even whilst now well into his 60’s. The legendary Twister Sister vocalist with his solo project proved quite the hit with the faithful. Batushka had been moved from their main stage slot to accommodate Cradle of Filth. But the surrounding on the Sophie Lancaster stage were far more fitting for this atmospheric act. I’m going to put the politics of this band aside for the purposes of this review. They brought atmospherics and theatrics in abundance. A multitude of religious artefacts fill the stage, a pulpit, candles and a plinth upon which sits a sacred text. The low red lights hid in its shadows the band, figures dressed in cloaks, their faces hidden. Theatrically the show is similar to that of Ghost, with religious imagery running throughout but it’s the dark black metal sound that hits home. Eerie, cacophonous noise in abundance.

Because of the movements of so many bands, The Lazy’s originally planned for the Sophie stage where Batushka ended up are now a later edition to the Newblood stage. Closing out the small arena they were a breath of fresh air as the festival is coming to a close. The Aussie rockers brought bags of fun and energy with them as they bounced around the stage like Tasmanian devils. A bit different to every other bands the festival put on, they brought a smile to many a festival goer left with just one more band to see. 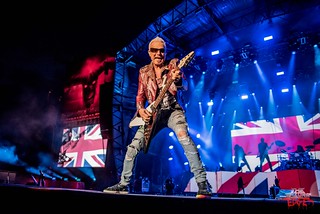 To close out the event, legendary German act, Scorpions, are here to put on one hell of a show. Mikkey Dee’s drum riser sits high on stage above a huge digital screen, another one sits behind him, filling the stage. The lights flicker to life and the screens light up as we are taken on a journey into the world of German heavy metal.

Making full use of the stage ramp heading out into the crowd, both Klaus Meine and Rudolf Schenker stand aloft their perch teasing their crowd with their ultimate showmanship. Through ‘Wind of Change’ and ‘Big Cities Nights’ they are majestic as is Mikkey Dee’s drum solo. An encore of ‘Still Loving You’ and ‘Rock You like A Hurricane’ is the icing upon the cake. Bloodstock, despite the weather, has again been the highlight of the summer calendar and long may it continue.

Missed part 1 of our review? Check it out here. 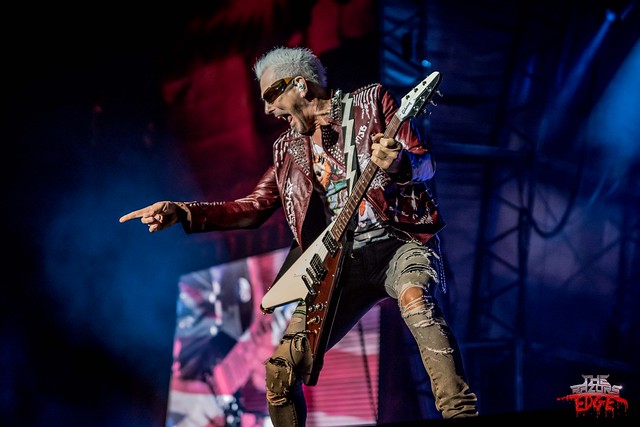