It was not long ago that thrash metal was a dying genre. Grunge, followed by nu-metal, had risen in popularity and added to that those 80’’s/90’s thrashers has started to settle down, have kids and gig going was not a top priority any more. There was a period of time when thrash metal gigs were sparsely attended affairs, bands like Testament playing to handfuls of people and the glory days of the genre a distant memory. But over the past few years the genre has returned to full force, gigs well attended, legendary bands putting out albums that beat those from the original “glory days”; thrash is well and truly back! Hence when Testament, Exodus and Death Angel came together for a UK tour, dubbed The Bay Strikes Back, thrashers young and old collectively wet their pants. What a tour this could be!

The Manchester show, as with all dates on this tour, is sold out - a far cry from the dark says of the early naughties. 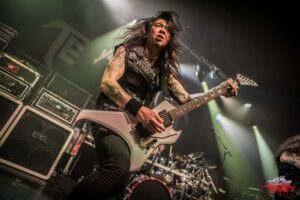 From the minute Death Angel take to the stage the crowd goes wild. Literally. Two pits open up in the mid-sized venue as noted by front man Mark Osegueda “let’s turn these two pits into one massive one”. Duly noted the fans oblige and the raucous show continues. The band themselves plough through a mix of classic and new songs with aplomb, Death Angel being one of the aforementioned bands who’s new material is as good if not better than their original work. For forty five minutes we are pounded by the duelling guitars of Ted and Rob, fans thrashing like maniac along with the tunes. The set is a show stealer, literally as we are about to find out, neither Exodus or Testament can top the performance Death Angel put on. A much under rated band; Death Angel can walk away from this tour heads held high knowing night after night Exodus and Testament struggled to match their own performance. 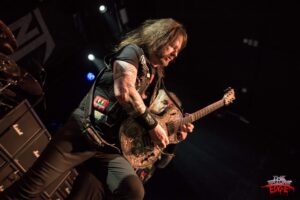 Exodus is very much the Gary Holt show, his new found fame having returns to the band from the Slayer camp, many of the crowd chant his name prior, during and after the set. Whilst the band were always going to struggle to match the performance before them they do their best. Holts performance itself showing just how much of a guitar god he is, talent flows forth and the crowd react in turn. A tease of ‘Raining Blood’ prefixes the set closer ‘Toxic Waltz’ which hits us all like a shovel in the face. Near top marks Exodus, that was epic. 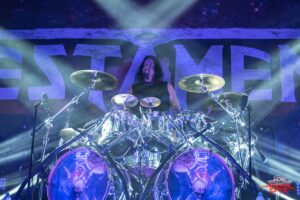 As headliners go, some would agrue Testament should have been part of the “big 4” of thrash. Their back catalogue and previous live performances backs up this claim, but alas they never were officially classed in that group, not that that had any hinderance on their career. As the dulcet tones of ‘Bad, Bad Leroy Brown’ fade into the distance [an interesting choice for the bands introduction] Gene Hoglan stands aloft his drum riser, in the spotlight, receiving the fans adulation.

The band plod through the opening section… ‘Eerie Inhabitants’, ‘The New Order’ and ‘The Haunting’. Plod being the operative word. The energy in the building from the previous two acts had lapsed a little, the fans a little calmer as they stand and appreciate the multiple Skolnick solos but the circle pit is no more and the crowd surfers are waiting for it all to kick off again. 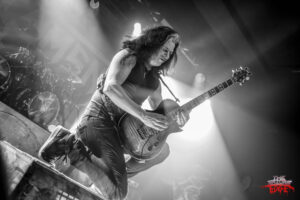 The set a true greatest hits performance from the thrash metal titans, spanning their whole career; ‘Brotherhood of the Snake’ melding perfectly with ‘Into The Pit’ and ‘Practice What You Preach’. Whilst the crowd is now energised again and the electric atmosphere is returning its not at its peak of the evening. There’s something about too many guitar solos that take the edge off things. Whilst Skolnick is technically one of the best musicians out there… sometimes fans just want to thrash. And that’s exactly what we get with ‘Over The Wall’ and ‘Disciples of The Watch’.

The evening has been one of the best evenings of thrash in recent memory. Whilst Testament headlined and Exodus shined, Death Angel stole the show. May they all return to thrash the UK again soon! 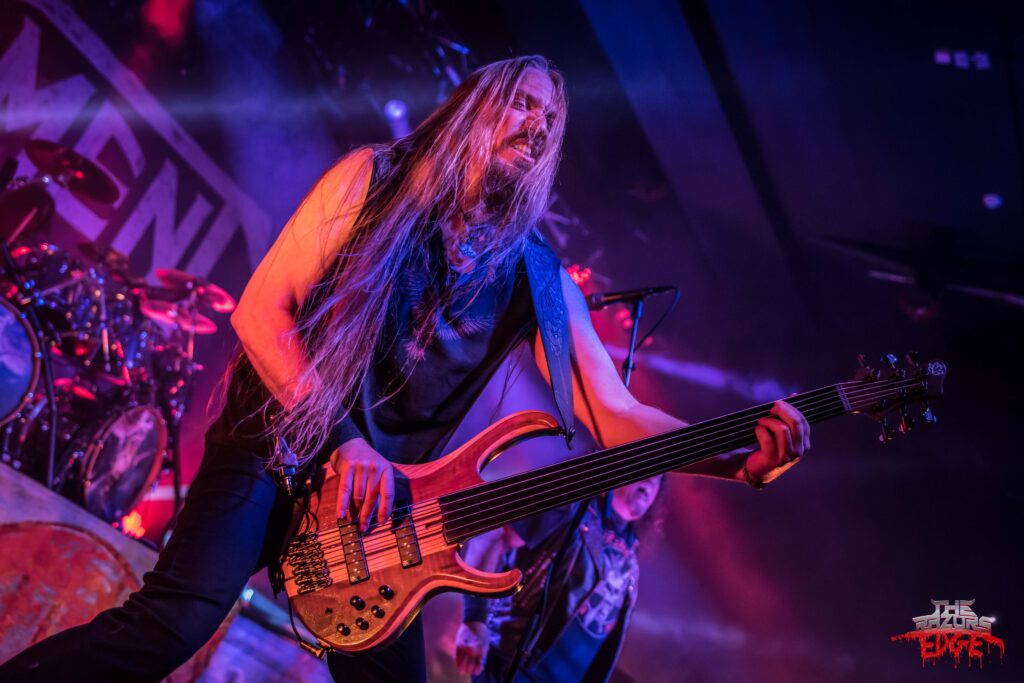 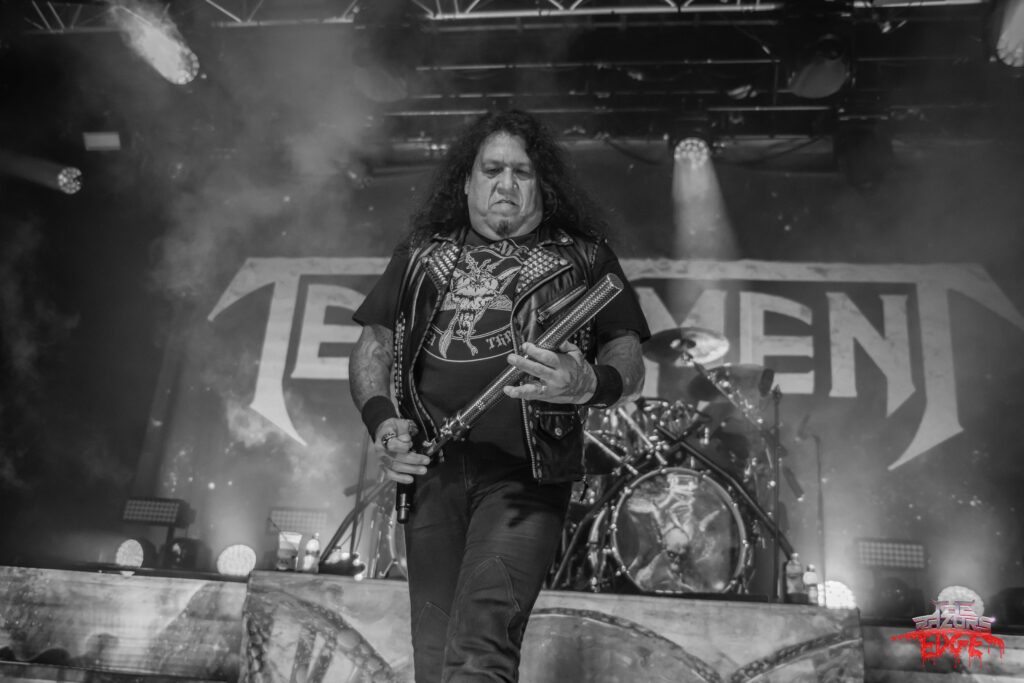 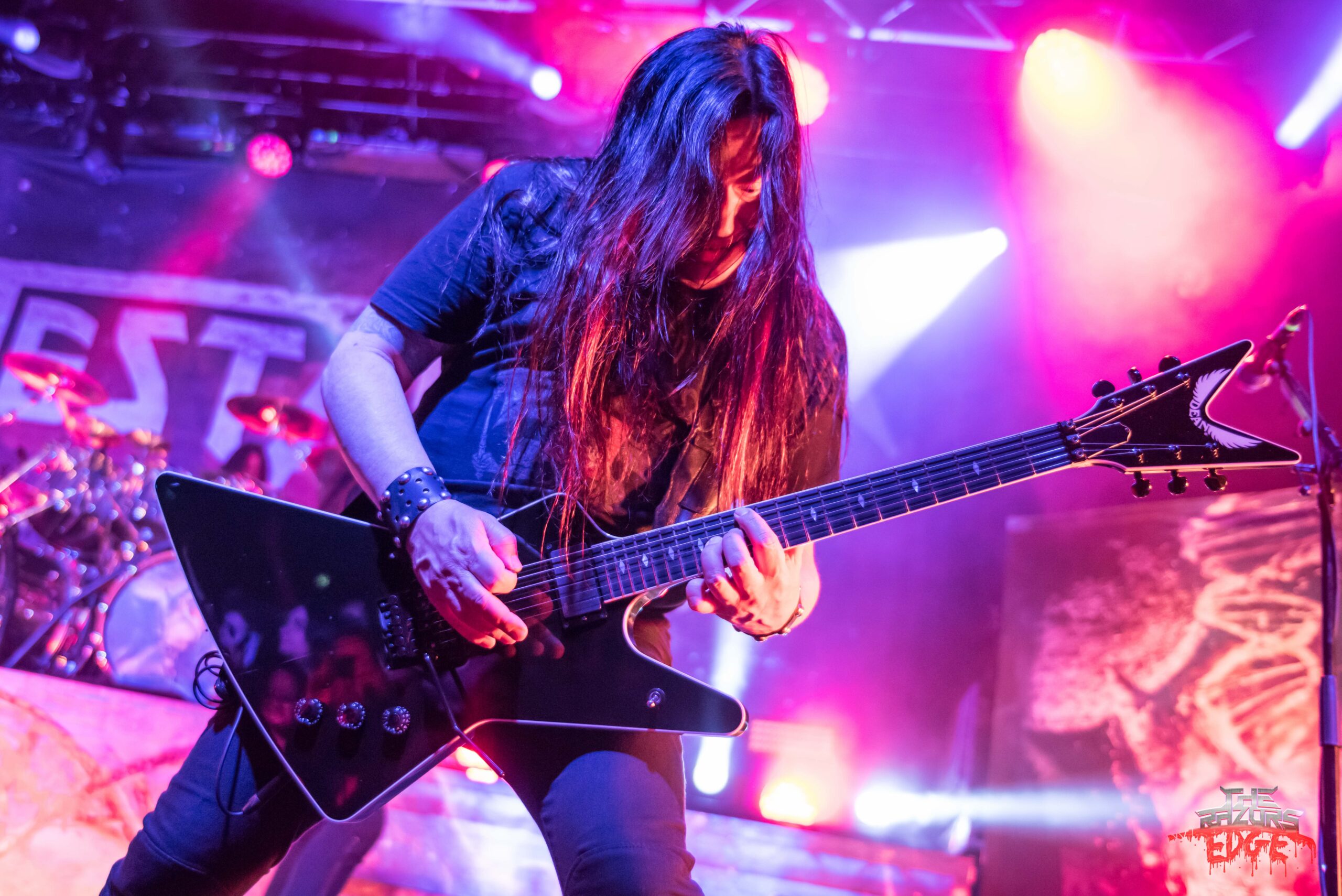