Sacred Reich have always been regarded as one of the bands that closely followed on the heels of the 'big four' of thrash. Despite never managing to break into that stratospheric arena most thrashers hold their music in high regard. They believe that if circumstances were different Sacred Reich could have challenged the big four.

It’s been a long while since any new Sacred Reich material has been recorded and one thing is for sure, now the wait is almost over it won’t take you very long to get through it. Being just over half an hour long with 8 tracks, 'Awakening' is a short sharp shock to the thrash metal senses. However, with all things Sacred Reich, it's not as simple as saying it is purely thrash metal. They always throw a curveball. So where is the curveball in this particular album?

On listening you quickly realise that Sacred Reich can still write a decent thrash riff/song. There are thrash riffs aplenty dotted all around this opus and arranged in such a way that any thrash metal fan would be happy to have this album their collection. Every song is draped in Phil Rind’s desperate vocal, who’s straining to find the notes underlines his 100% effort and commitment to the sound. 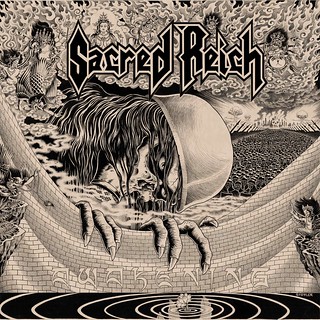 Throughout the album there are some straight up thrash bangers, ‘Revolution’ and ‘Manifest Reality’ are two examples of Sacred Reich challenging anyone with the genre's crown. Parts of the album do fall into “thrash verse, metal chorus”. ‘Something to Believe’ and ‘Divide and Conquer’ are examples of the thrash riff and then a slower more metal, almost commercial chorus.

Later in the album they display two sides of their diverse song writing ability. 'Killing Machine' is a straight up heavy metal song played by a thrash metal band. Simple, basic, meat and potatoes song which does the job. The next song, ‘Death Valley’ is the curve ball on this album we’ve been waiting for. The longest song on the recording with three distinct riffs, this sounds a lot like Kings of Leon doing fast paced metal. It's a laid-back affair in comparison with the rest of the album with that more commercial chorus. Add in that cowbell by Dave McClain and we have a very different yet standout song.

Speaking of which, Dave McClain really goes to town with his drumming and his unique sound fills this record. He’s spent decades playing with Machine Head, there is no doubt that he can drum. He’s like a puppy that's been left at home all day and it's finally been let out to play. Why do one or two fills when you can do four or five? His thundering drums are plastered all over the record, so much so, that you can almost hear his drumsticks flying through the air in the slower stompier points in songs such as Awakening.

After such a long wait, it’s good to have them back. A fine set of songs, with more than enough to keep the old guard happy. Maybe just a bit more out and out metal than they were back in the day.