This coming weekend see's the second annual instalment of the Stonedeaf Festival at Newark Showgrounds. A festival who's origins start with a Facebook group of Donington (Monsters of Rock) veterans who wanted to see the old style of rock festival return - one day, one stage, no frills, just out and out rock! A style they felt the modern day Download Festival had moved away from. The organisers saw a gap in the market and in their first year, 2018, delivered perfectly on their mission statement.

Now we hit year two, with bigger bands and more ticket sales, its already lining up to better than year one and we can't wait to join them this coming bank holiday weekend. With nine bands on one stage over the course of the day, DJ's in between sets and the almighty Krusher doing a skit or two it's a day to remember.

Opening the festival this year are Samarkind, relative unknowns to many of you, but they won their spot at the festival via a battle of the bands competition and from the previews we've seen, they'll blow your socks off, and your hangovers away, from early doors.

Massive are at the forefront of the Aussie invasion, a tidal wave of great bands from down under destroying our ears with hard rocking riffs and an abundance of energy. The boys are sure to gets the heads banging and fists pumping with their second on stage slot. That leaves a lot for the Amorettes to follow, and with a line up change recently do we even know what to expect? Gill and her new band mates will no doubt put on a high voltage show that has become the bands trade mark these past few years.

Diamond Head are the first 'big' name to grace this years festival line up. Brian Tatler and his group are cited as one of Metallica's main influences and will be a must watch for most in attendance. Am I Evil? You can expect that and many more Diamond Head classic's during their set.

Having taken in Queensrÿche at Bloodstock just a week ago, its now former front man Geoff Tate's turn to take the spotlight. He is a big draw for festival goers and his ‘best of Operation:Mindcrime’ set will be a talking point from the day as a whole. Wayward Sons have the tough job to follow Geoff Tate, but with the experience of former Little Angels and GUN frontman Toby Jepson at the helm we are sure they are more than up for the job. The project has come in for critical acclaim and has a growing fan base make sure you get to the stage early as they will be popular!

Former Motorhead guitarist Phil Campbell is another big name the festival have bagged for this year. His 'Bastard Sons' project is made up mostly, of his own sons, and of course Phil himself on his ever trusty guitar. Beefy guitar riffs all the way will see off dusk over the Newark Showgrounds as Phil and his boys lay waste to the fans before him.

Main support for the day are Inglorious, hot off the back of critically acclaimed album, Ride To Nowhere, released in January. The band have been through some turmoil with a three member line up change during the recording sessions. Will the new line up live up to the hype of the old? Come Saturday we will find out.

And finally, to close out the day we will see the mighty Glenn Hughes grace the aptly named Tommy Vance stage. One rock legend performing on the stage of another. Hughes, who has played in some of the greatest bands of all time, will be performing a set of Deep Purple classic's. Under the late August moonlit sky, with hopefully dry weather, it will be a night to remember.

Not got your ticket yet, its not too late. Get them here. 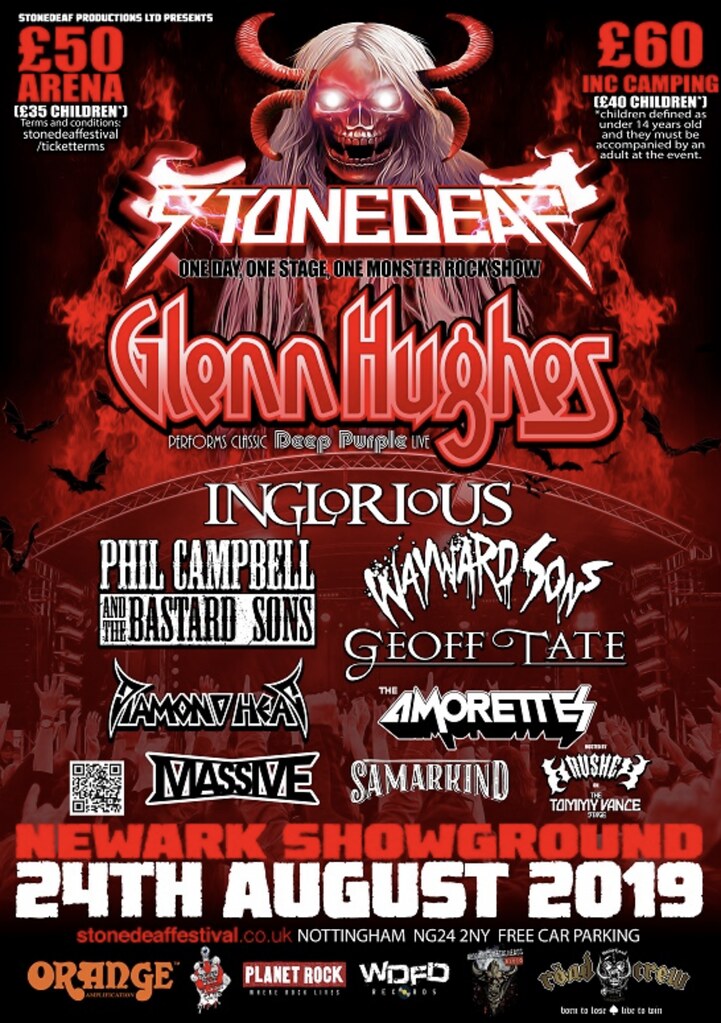