The late August bank holiday weekend has brought with it a heat wave, for a nice change. The sun is shining in anger over the Newark Showgrounds, home to today’s festival, Stonedeaf. The second edition of the annual summer festival has won the weather battle and now the fans fill the arena awaiting to see what the nine band bill has in store for us.

Newark Showgrounds, is a great venue for a summer festival, great camping facilities, great views and all in all a wonderful setting. The arena, headed at one end by the towering stage, is lined by beer tents, food stalls, merchandise and signing tents. The festival has it all, on a smaller scale than its commercial cousins, but everything you could want for a day of rock in the sun is here.

Opening the second edition of the Stonedeaf festival are Samarkind, relative unknowns to many of us prior to today having won their spot at the festival via a battle of the bands competition. Its an explosive start to the day, front man David Paul Byrne is in your face from the off, his gritty vocals grabbing your attention whilst the blues fueled riffs blow your mind. Samarkind are inspired and have left the arena with three thousand new fans today. 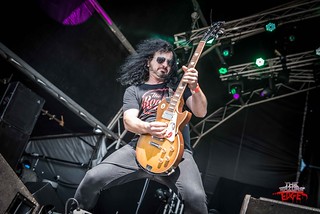 As the sun heats up, so does the action on stage with Aussie rockers Massive set to blow away what’s remaining of our hangovers. Billed by Kerrang! as ready to take over from Guns N’ Roses, these boys have a weight of expectation to live up to. That could be too much for some, but not this macho-rock engine! Straight out of the blocks the energy levels rise, the fists are pumping in the crowd and the heads are banging. The boys from down under destroy our ears for thirty minutes of hard rocking sounds, highlighted by getting the fans up on stage for a dance off. That thirty minutes was something special!

It’s a tough act to follow, but The Amorette’s are more than up for the challenge. Recent line up changes have left only Gill from the original line up remaining. However, the new members, including Laurie Buchanan from the Cult Classics and members of Tequila Mockingbird have more than enough pedigree to take this band forward. Gill’s stage presence brightens up the already sunny early afternoon, hair being whipped about with glee as they quartet rock our socks off. 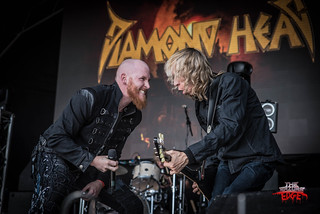 Heavy metal royalty are next to grace the stage in the form of Diamond Head. The eagle eyed among the fans will have seen the legendary Brian Tatler side of stage soaking up both of the previous two bands, but now it’s his turn. The inspiration for bands such as Metallica and Megadeth set the stage alight with an inspiring set. Front-man Rasmus the anchor of the band both in musical and visual performance, tassels flow from his trousers as he storms around the stage, his booming voice all commanding. It’s Tatler that draws people in, his exquisite guitar playing through ‘It’s Electric’, ‘Belly of the Beat’ and ‘Helpless’ a delight for the old school fans. Topped off by the inevitable ‘Am I Evil?’ and the finishing touch an RAF flyby to close out the show. With that Diamond Head have set the bar high for the rest of the day.

Geoff Tate, the mastermind behind Queensrÿche’s Operation: Mindcrime album, among others, brings his solo performance to Stonedeaf. An hour long greatest hits package see’s him perform the very best songs from the Queensrÿche albums ‘Rage’, Operation: Mindcrime’ and ‘Empire’. The younger band he has forged around him breathe life and virility into the act. A magnificent set which highlighted both Tate’s song writing ability and vocal prowess.

Looking at the names on the bill you would be forgiven for thinking Wayward Sons should have had a higher stage slot. With the heat of the day at it’s peak and many a fan cooking in the Newark field, Toby Jepson’s latest project takes to the stage. Bassist Nic Wastell makes history as the only artist to perform at both editions of Stonedeaf, having made his debut with Chrome Molly last year. Wayward Sons set is full of juicy guitar licks, throbbing basslines along with Jepson’s charisma which drives the band forward. A majestic set worthy of the Newark crowd. 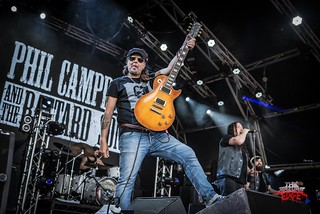 Former Motorhead guitarist Phil Campbell is the next big name to grace today's stage. His 'Bastard Sons' project is made up mostly of his own sons alongside himself on his trusty guitar. Phil bounds on stage with the youthful vigour of his sons, who seem to be having a great influence on the legends enjoyment of his music. Beefy guitar riffs all the way destroy the Newark crowd in a set rounded out with a couple of classic covers. Hawkwind’s ‘Silver Machine’ and Motorhead’s ‘Ace of Spades’ lapped up by the baying fans.

As the sun begins to set over the horizon and they end is nigh, special guests Inglorious take to the stage. Another band with a much-changed line up since the majority of the crowd last saw them and flying high off the back of critically acclaimed album ‘Ride To Nowhere’, released back in January. The performance is built around the stunning vocals of Nathan and vibrant guitar solos from Danny. But the whole act oozes hard rock quality. They have been hailed as a young Deep Purple and from the performance, that assessment is not far wrong. 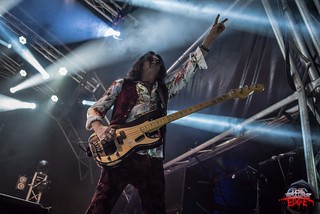 In the warm summer night we wait for Glenn Hughes to arrive, and then wait a little longer, his set delayed slightly by technical issues. But when he does arrive the crowd goes wild. The ultimate voice of rock and roll is performing a special set of Deep Purple classics to round out an action packed day at Stonedeaf. The stage set in technicolor backdrops and lit to perfection and Glenn and his band ‘Stormbringer’, ‘Sail Away’ and ‘You keep On Moving’. Some of the gremlins which delayed his set continue, but the ultimate professions carries on unfazed and to the delight of this adoring audience.

‘Smoke on The Water’ brings the initial phase of the show to a close, but as the stage rigging lights up the Newark skyline Glenn returns to round out the day with ‘Burn’ and ‘Highway Star’. His vocal performance the shining light of a magnificent day.

As the fans head back to their tents and begin to think of getting home, Stonedeaf stands triumphant. Building on the foundations of its first year, 2019 for the festival was bigger, had a stronger line up, sold more tickets and was ultimately the highlight of the summer. We can’t wait to see what 2020 will bring!

Tickets for next years festival are already on sale, and at early bird discount prices. Grab yours now. 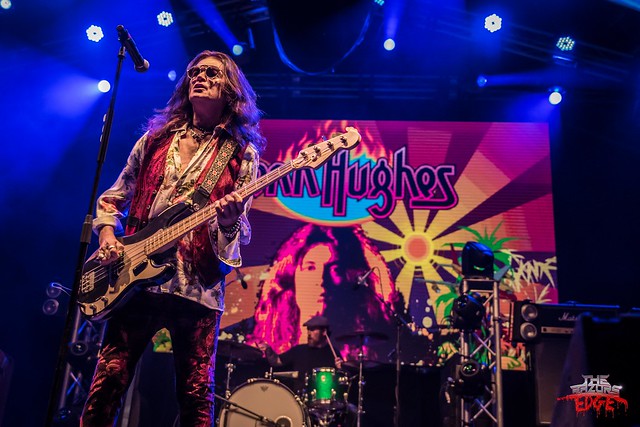 Have you checked out our other Stonedeaf Festival coverage?