Bloodstock is fast approaching, we are just a week away from the UK's best metal festival opening its gates and for 20,000 happy campers to enjoy a weekend of beer and heavy music. The highlight of the summer festival season in this country will see the likes of Rotting Christ, Sabaton, Parkway Drive and The Scorpians headline the event over four days.

By now you will have undoubtedly seen previews of the festival else where, all detailing the delights of those big bands and what they will bring to the weekends entertainment. However, here at The Razor's Edge we decided to look at it a little differently. Every year our favourite element of the festival is going to the Sophie Lancaster and New Blood stages and discovering new bands we'd never heard of before.

The festival has its big names and crowd pleasers, but we are going to take a look and see what else it has to offer. Here are a few bands for each day of the festival that we think you should check out.

Thursday is just a five band line up, all on the Sophie Lancaster stage, the warm up to the main event. But dig a little deeper beyond headliners Rotting Christ and it's actually the strongest Thursday line up the festival has ever had. If you like your stoner/doom then the prospect of both Barbarian Hermit and Ten Ton Slug will fill you with glee! But the highlight has to be Footprints in The Custard. Yes they are a parody band I hear you cry, but their appearance a few years ago on the New Blood stage blew us all away. To kick start your weekend the band will regale you with songs like 'When Santa Spaffed In My Stocking' and 'My Ganny's a Gusher'. Guaranteed to bring a smile to your face.

Friday is when the festival kicks off in anger and there is far more choice over four full stages of action. Starting with the smallest stage, sponsored by Jagermeister, Eyes of The Raven are the ones to watch! The beer swilling, waistcoat clad stoner rockers will no doubt put on an outstanding performance. They are not out and out stoner, they mix in some thrashy riffs for good measure. Its full on entertainment all the way with these lads!

On the New Blood Stage Death by Ki have caught our eye and we expect a lot from their performance, energetic groove laden thrash will be delivered in droves. One the Sophie Stage BongCauldron will be performing their last ever show together, so its bound to be special. If you like eyehategod and Corrosion of Conformity these boys are for you. Fuzzy riff's, gruff vocals and a whole heap of HEAVY. These guys will destroy. 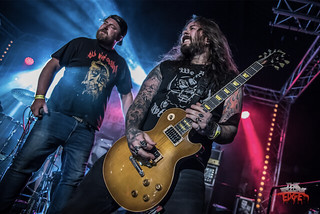 Last, but by no means least, for Friday's ones to watch are 20 year veterans Raging Speedhorn. Missing John, who has family commitments else where, the band will be joined by guest vocalist Dan Cook (formally of northern upstarts RSJ) to tear Bloodstock a new one. The Corby noise mongers fresh off a tour with Phil Anselmo where they blew him away every night will be up for this late evening show and no doubt bring the house down.

For Saturday there are a handful of bands we highly recommend you do not miss! For starters there is Masters Call who are brutal blackened death metal. Powerful black metal riffs melded with aggressive death metal undertones and haunting vocals. Over on the New Blood stage Voidlurker, Birminghams Metal 2 The Masses winners, will bring their dark doomy, atmospheric fuzz to prominence and if you like a bit of deathcore than Djinova are the guys for you.

Heading back to the Jagermeister stage Nottinghams own old school death metal outfit Pemphigoid will destroy with crushing riffs, and a hint of something darker and more evil. Highlight of the day on the Sophie Lancaster stage will be the ultimate in old school thrash, Dust Bolt. A band who have gone under the radar of most of us for far too long, this is the opportunity for the band to break out and Bloodstock is the ideal place for them to do it. If you like your thrash then you need to see them!

The final day of the festival is set to be a barnstormer. There are so many bands that we struggled to pick a few to highlight as worth seeing. However, cream of the crop have to be Wolverhampton Metal 2 The Masses winners Elyrean. The technical thrash metallers, who layer their thrash with a heavy dose of death metal, will destory the New Blood stage. Outstanding throughout their M2TM run. Taking more than a little influence from Chuck Schuldiner; their snarling raucous guitars mixed with Asa's harrowing vocal tone delivers the ultimate thrash metal attack. Expect a huge pit to open up for some good friendly, violent fun. 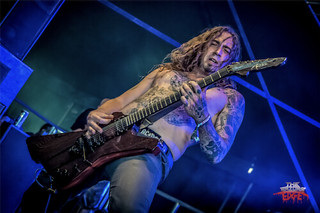 Witch Tripper over on the Sophie Lancaster stage also promise to delivery the goods. In 2016 the trio put on an awe inspiring display on the New Blood stage. Since then they've gone from strength to strength and built up a large, loyal following. Their blues infused stoner rock will be quite the welcome contrast and Hypocrisy and Aborted on the main stage and they are guaranteed to put on one hell of a show.

The final band of the festival that we recommend you check out are Leicesters grunge inspired outfit Resin. On any normal day we would recommend you check out this band anyway, but for Bloodstock they are doing something special, brining a large section of an orchestra to play with them. This should be one of the more interesting events of the weekend and one we highly recommend you take time out of your day to witness.

So there you have it, The Razor's Edge preview and recommendations of some lesser known bands appearing at Bloodstock this year that we really think you'll enjoy!