Just a few weeks after the last Uprising announcement we have another. This time the three day event has added more bands and announced the day splits for the line up.

First off Mad Spanner are added to the bill, the thrash, punk, comedy metal outfit hailing from Wales/Shropshire narrowly missed out on the chance of playing at Bloodstock via the Metal 2 The Masses competition. Now they get to show us all just how good they are joining Uprising on the Friday Night.

Also on the Friday are the previously announced Ward XVI with their blood thirsty theatrical metal, 13, and Mörti Viventi. All performing at Leicester's Firebug venue.

On the Saturday the already confirmed bands lining up are; Godfathers of noise Napalm Death and  legendary death metalers Memoriam. Alongside Vardis, Acid Reign, OHHMS, Krysthla, Alunah, Resin, Foul Body Autopsy and local favourites Seven Hells. Saturdays all day event will be at Leicester's O2 Academy venue and promises to sell out quickly!

Finally, on the Sunday the event returns to the Firebug in the city centre for another full on metal day. The line up includes Prognosis, Stormbringer, Pemphigoid, Ashen Crown, Dishonour the Crown, Devil's Playground and Elyrean.

With more bands still to be announced it is already shaping up to be one of the best weekends of the year!

Get your tickets whilst you still can here. 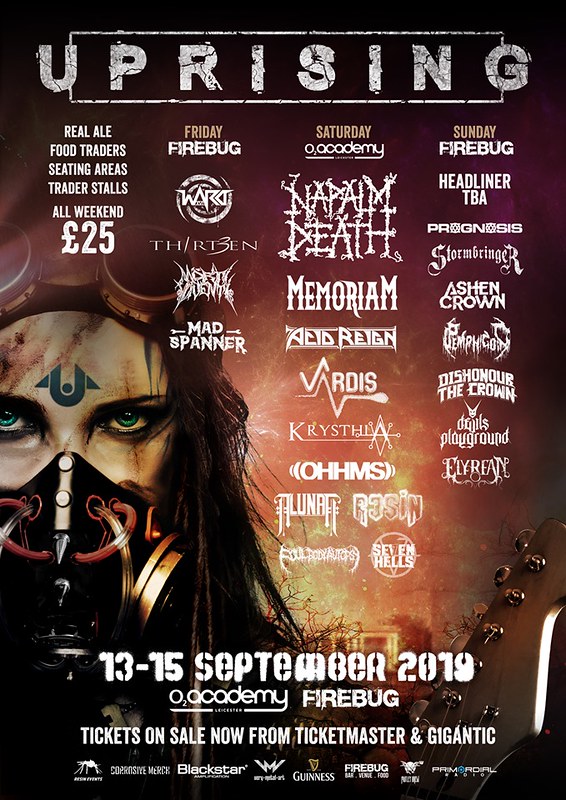