It is a truth universally acknowledged that a reviewer, having spent a week trying to get to grips with the intricacies and complexities of the new Tool album must be in want of thirty minutes of filthy blackened grind. Luckily, Pollinator, the new record from Michigan three-piece Cloud Rat just happens to be at hand.

One of the undergrounds most compelling bands, Cloud Rat have been no slouches when it comes it product over the past decade, with eleven E.P.s and splits, along side a live album and three full-lengths to their name, Pollinator is the latest in a long line of releases and their first complete album in four years. 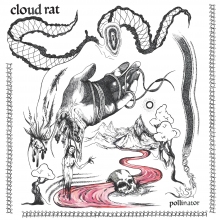 The record kicks off with a massive blast beat from drummer, Brandon Hill and some dirty riffing from guitarist Rorick Boris; when the vocals kick in, the screeched strains from Madison Marshall, you begin to get the picture of what Cloud Rat are about. Both opener, Losing Weight and its follow up Delayed Grief - Farmhouse Red share commonalities in their make up and delivery and at this point you think you know - you’ve heard this before. But such is the breadth of Pollinator that the rest of the albums’ run-time is dedicated to throwing one curve-ball after another while always retaining the ferocity of the opening duo.

There are times when Cloud Rat wear their influences on their collective sleeves: Oathbreaker, Agoraphobic Nosebleed and Fuck the Facts for the rampant female vocal, (fans of Female Fronted Goth Metal need not apply) the obligatory Napalm Death comparison and the ingenuity of Pig Destroyer. But also the Black Metal side, with The Mad coming over like something that would not be out of place on a post-Gaahl/ King-era Gorgoroth. There’s even a vocal line from Madison on Biome that I couldn’t help but picture John Connelly of Nuclear Assault delivering.

However, Luminescent Cellar blows away all you thought you knew and, like House of Snakes on Pig Destroyer’s Head Cage, presents you with something you never expected. A slow, sludgy beginning with intertwining guitar tones demonstrate Cloud Rat to have anything like a lack of ideas. And as much as I’m enjoying exploring Fear Inoculum, it is a welcome distraction to have my face pummeled by three angry Michigans.