Today, three years after their previous release, Mars Red Sky unleash their latest opus on the world. The French torch bearers for heavy psychedelic music return with ‘The Task Eternal’. The album itself written in a medieval castle, the men from Bordeaux do not take the creative process lightly.

The band have forged quite the career for themselves since their foundations, having toured with the likes of Sleep, Dinosaur Jr., Kyuss Lives!, Killing Joke or Gojira and performed at such prestigious festivals as SXSW, Hellfest, Roadburn, Desertfest, and Eurockéennes festival.

Their sophomore full-length "Stranded In Arcadia" was a sci-fi odyssey filled with dystopian reveries, a recording that landed them firmly in the spotlight from which they’ve built. ‘The Task Eternal’ is the bands fourth full length player and one highly anticipated amongst fans. 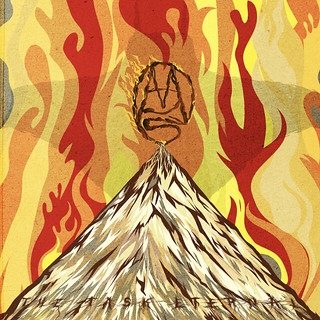 Vocals are used sparingly throughout the album, letting the music do the talking, whilst they take a back seat, appearing to the steer the narrative when required. ‘The Proving Grounds’ opens the album, heavy bass leading into throbbing, repetitive riffs. As the song progresses it opens out, lightens and draws the listener in.

They produce a wonderfully progressive and expansive sound, foundations in 70’s psychedelic rock and moving into the fringes of stoner rock. ‘Collector’ in places has a vocal tone reminiscent of Papa Emeritus/Cardinal Copia of Ghost, but musically there is no comparison. The bass to accompanying provides you with a warm and fuzzy feeling.

‘Reacts’ is very much bass driven, the sound produced similar to that of Cliff Burton during his bass solo’s. The album fluctuates in weight, between light, warm, fluffy psychedelic numbers and heavy, doomy, bass drive beasts. All the time keeping the listener engaged and encapsulated in the world they create.

If you like your psychedelic rock, progressive and skirting around the fringes of stoner and doom, then Mars Red Sky’s ‘The Task Eternal’ is all you will need to listen to today!