The arrival of a new Opeth record is often viewed with trepidation, anticipation and excitement in equal measures. Never quite sure what they are going to produce, many fans and critics are left either delighted, confused or even disappointed. It's fairly safe to say that in their current creative position Opeth are unlikely to produce an album that harks directly back to the brutally forward thinking death metal that they executed so sublimely on earlier albums. This is where the problem may be for those who may be disappointed.  It is bizarre though that people still expect or long for a death metal Opeth record. The last truly death like material featured on 'Watershed' in 2008. With three further full lengths of staggering progressive rock and metal since 'Watershed'; their new release, the bands 13th, is the latin titled 'In Cauda Venenum' (translated as poison/sting in the tail) So that's the history lesson over now on to the review.

Assuming you are still reading this then there is a good chance you are familiar with what Opeth do. If not, then let me briefly explain in very simple terms... A new album by Opeth could be likened to life and the progression we take through life. You start at the beginning, unsure what road you will go down and as life develops you experience all manner of emotions. Unsure of where this album will take you, 'In Cauda Venenum' begins with an instrumental 'Livets Trädgård' (Garden Of Earthley Delights). An understated male choir subtly eases the listener in and then combines with a synthy electronic motif to great effect. A child's voice speaking in Swedish furthers leaves you wandering which way the album will go.

'Svetkets Prins' (Dignity) starts with soaring guitars and synths, as uplifting as it is intriguing. The addition of a male sampled spoken word passage (a previous Swedish Prime minister I believe) sitting slightly back in the mix makes for an alluring listen.  Riffs and keys compliment the other making way for a gentle acoustic guitar. Mikael Akerfeldt proves his diversity and brilliance as a vocalist ranging from falsetto through to his velvety warm style and onto the point of really stretching his voice (in a good way) masterfully walking the line between singing and shouting.  No death grunts or growls though (although Mikael has possibly the best death growl out there, it's just not on this record). However, with a voice as sublime as this and one which works perfectly with the music, why would you use it in any other way. 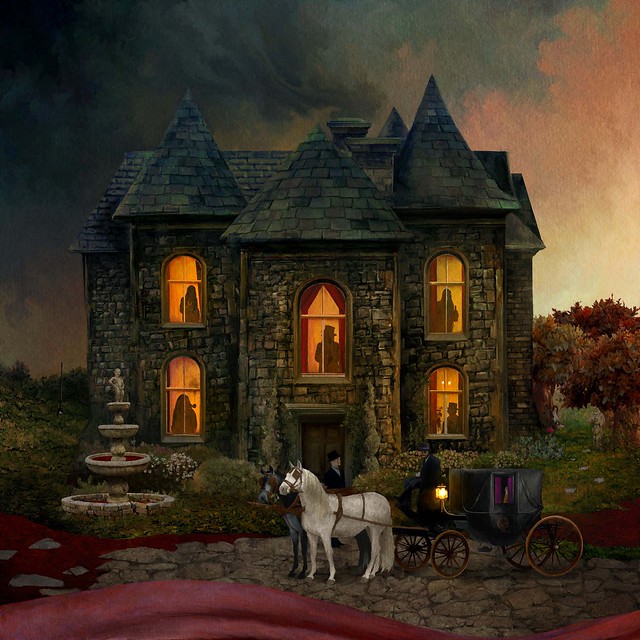 The analogy of the album being like the unknown path of life continues on track three, the lead single 'Hjärtat Vet Vad Handen Gör' (Heart in Hand). A bass inspired heavy riff and spiralling keys hold an air of impending doom or uncertainty. The chugging rhythm section is so locked in and drives the song with its space rock vibe onwards where the verses sound as catchy as choruses. Out of the organised and orchestrated confusion comes one of the albums many beautiful moments. A delicate guitar hints at signs of hope and this is cemented when Mikaels vocals accompany it.

The album was written initially in Swedish with Mikael recognising this as the definitive version of 'In Cauda Vaneum'. He later recorded a version in the English Language as well. Listening to both, whilst the music is the same, they have a very slight different feel. As I don't speak Swedish, I found myself tying to focus on the sounds of words and it made for a more mysterious listen.  With the English Version I appreciated the depth of the storytelling and enjoyed the extra aspect the lyrics added.

The album progresses and pulls you along, in fact you can't do anything other than to surrender to the sheer brilliance of the music. At times intense, melancholic, always engaging and hopeful, it generates all manner of emotions and feelings... (there again our simplified life analogy) and after repeated listens there will be certain harmonies vocally or musically swirling round your head. 'Minnet Yta' (Lovelorn Crime) slows things down and maintains the same tempo however it escalates unleashing a whirling joyous punch of soaring lead guitar. The heavier songs whilst at times are complex they certainly are indeed heavy. 'Charlatan' has a progressive djenty menace to it and the crunching guitars are further example of Opeths comfort and ease with which they undertake their craft. The many heavy moments on the album incorporate all manner of styles from delicate acoustic, hard rock, doomy heavy metal, psychedelia and elements of jazz. Trying to pin this album into a particular genre would be pointless. Why try anyway? Its Opeth! They do what they do and thankfully we get to experience this wonderful creative journey they continue to undertake.

If there was a song that represents the eery Travis Smith Cover Art then it is the epic closer to the album 'Allting Tar Slut' (All Things Will Pass) is as dramatic as it is intense. Its haunting piano makes way for doomy rhythmic chords followed by further super heavy crashing riffs. This in turn is brushed aside by the uplifting refrain that shows the best is saved till the end.

'In Cauda Veneum' in summary is a meeting of old and new. There is no Death Metal but it certainly revisits heavier elements of their back catalogue that were explored on 'Ghost Reveries' and 'Watershed'. Again, in a very simplified way, like life itself this album is a journey. One which as it progresses you take so much from it and experience all manner of emotions. Hopefully there is not a 'sting in the tail' and this album can be a genuine life affirming experience for you.

Opeth's album 'In Cauda Venenum' is released on September 27th via Nuclear Blast.