Dawn Ray'd release their new album 'Behold Sedition Plainsong' at the end of October. Robbie sat down with Simon from the band to talk about the album, the cause and their upcoming appearance at Damnation Festival.

Simon: We are an anarchist black metal band from the north of England. We are a three piece, Matt plays drums, Fabian plays guitar and I (Simon) sing and play violin.

The Razor's Edge: What bands got you into metal and then aided your progression into extreme metal?

Simon:I got into metal through black metal actually, we used to play in DIY bands, so we were already big into punk and crust, and from there got into death metal and black metal. Matt is a dyed in the wool metal head though, and mostly just seems to listen to Judas Priest and Motörhead!

The Razor's Edge: You music is delivered with a strong message. Who were you listening to around the time you realised you wanted to do more than simply play music? To in a way use your voice and join the resistance as it were?

Simon: I’ve always been concerned about the injustices happening around us, I was involved in the anti-war movement at school, I used to listen to a lot of punk at that age too, so that introduced me to a lot of radical left wing ideas. For me these are ideas you can’t avoid when you live in working class neighbourhoods. Fabian group in the north Ireland where you don’t have the privilege of not being aware of political struggles. At this point it is so ingrained in who we are it’s hard to imagine a time without these beliefs.

The Razor's Edge: What (if anything) do you want the listener to take away from the messages of your songs?

Simon: Ultimately I want people to become anarchists as I believe it is the only political philosophy that has the ability to be liberate everybody whilst oppressing no one. At the very least I hope that people will consider stopping trusting authority and the state, and feel empowered to fight to make the world a better place.

The Razor's Edge: Coming from Liverpool may have had some influence on you but has it been a significant factor in you choosing to get into activism and an interest in political themes?

Simon: None of us are actually from Liverpool, Matt lives in Leeds and me and Fabian moved to Liverpool to study. I did most of my political development in Liverpool as it’s where I spent my formative years, but I think it was a path I would have found myself on regardless of where I was. The DIY scene, especially in Europe is explicitly anarchist, and so were a lot of the bands I was listening to then. That said, Liverpool is an awesome place, the Shun the Sun campaign, Fans Supporting Foodbanks, it’s history of syndicalism, trade unionism and civil unrest give it an impressive legacy. It is a very forward thinking city, and I’m proud to live here.

The Razor's Edge: Who else do you feel is pushing the boundaries both musically and socio-politically?

Simon: Finding bands that have both good songs and good politics is hard, but my favourite current anarchist bands are Trespasser, Underdark and Moscow Death Brigade.

The Razor's Edge: It seems touring partners in metal are far more varied now with bands from different genres playing the same bills. Do you feel crowds become more accepting in general?
Or maybe it's that bands with more of a message and something to say make ideal touring partners?

Simon: I guess you have to have something on common for a tour package to work, but I think there have always been varied tours though, variety makes for a good show I think. You also ideally want to tour with people you will get on well with, and having the same core beliefs and values is a good way to aim for that! I couldn’t spent 2 weeks in a van with a band that were sexist, racist or classist. Anarchists make the best tour partners in my experience...

The Razor's Edge: You are playing with Pijn, a different band sonically but with interesting themes in their music, like you. What other non black metal bands would you like to tour with?

Simon: Godspeed You! Black Emperor or Propagandhi would be cool. I’m down to tour with most anarchist bands, you have to do have something in common for the tour to make sense. We definitely get to meet some interesting bands though, Volur, Forest Of Stars, Dead To A Dying World and Ragana each have very unique sounds, and I think we inevitably crossed paths because we are all trying to push the boundaries of what these genres can be in different ways!

The Razor's Edge: On the recording front are there any artists that you would like to collaborate with?

Simon: We haven’t got anything planned, and honestly right now thinking about writing another record is a headfuck as we have a record coming out next week, so I’m definitely not ready to write again yet! A colander isn’t something we’ve done before, but who knows what the future will bring.

The Razor's Edge: Away from music who do you look up to and who inspired you?

Simon: I love a lot of anarchist writers, Peter Gelderloos is a very inspiring person, also some of the older writers like Enrico Malatesta or Emma Goldman. I’m also into contemporary poetry like Sharon Olds, TS Elliot and John Burnside.

The Razor's Edge: In terms of touring are their any locations/countries on your wish list to play?

Simon: I’d love to play Asia as we haven’t got there yet, India would be awesome! South America would be great, but to be honest we will go anywhere, if you promise us good shows and vegan food we will get on a plane to pretty much anywhere!

The Razor's Edge: You're playing Damnation Festival in a few weeks, how familiar are you with the festival and is it an event you've always wanted to play?

Simon: Yeah I’ve been quite a few times, it’s an awesome festival, every year the line up is insane, so I’m stoked to be a part of that lineup this year! It feels like a cool milestone for us definitely.

The Razor's Edge: You're playing the Cult Never Dies Stage which has seen some quite intense shows over the years. What are you planning to do to live up to the stages reputation?

Simon: We aren’t big fans of special one off shows really, but we pride ourselves on our live show, our live show is pretty intense. We are always super tight, so although we don’t have some special novelty planned for the fest, I think our live show rips. We are probably the first band to talk about antifascism from the stage there, so that makes things interesting I think!

The Razor's Edge: The line up has you clashing with Raging Speedhorn, which will make it a tough decision on who to watch for a number of fans. What would you say to the Damnation Festival faithful to get them to watch you on the day?

Simon: [Laughs] I’m not in the habit of trying to beg favour with people, I guess if you prefer black metal to Raging Speedhorn, then come watch us! If you are right wing leaning then come see us and we will change your mind, if you are an anarchist or believe in anti-authoritarian ideals come hang out with us after the show! We do our best to make our shows as safe for everyone as possible, we’ve physically kicked Nazis out of shows before, so that shit isn’t tolerated at all. There is a lot to see and it’s always impossible to see everything you want to see, so I guess do your best and enjoy the fest!

The Razor's Edge: Now the album is out, whats next for Dawn Ray'd? Where do you go from here?

Simon: We have a UK tour this month, starting with a release show at The Black Heart on the 23rd, then we are going to Europe with False in November and we have a big US tour planned for early next year. Basically we will be doing our best to play as many shows as we can for the foreseeable future… 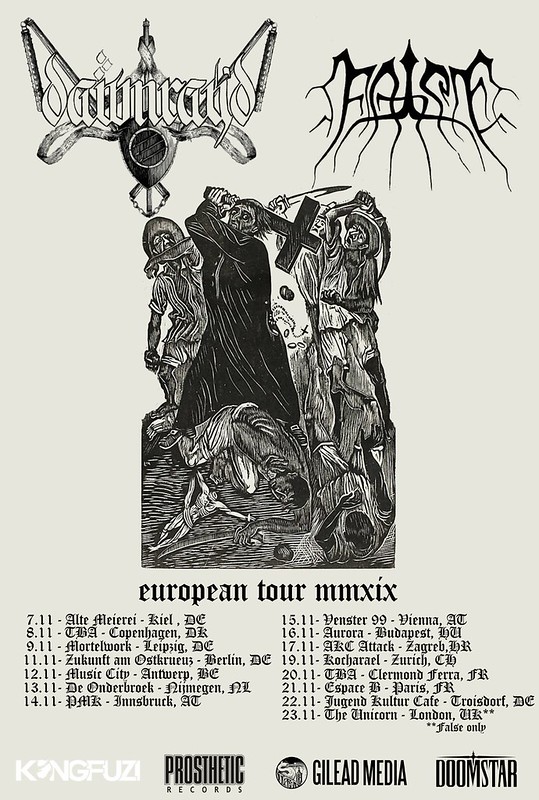