The doom genre is one that has produced a raft of talent over the years. Some outstanding bands have gained mass popularity stemming from a genre pretty much built around the influence of Tony Iommi’s guitar riffs. The only issue in the genre is that so many acts sound so very similar. To make your mark you need to deliver something different.

This is where Alunah shine. The Birmingham quartet were formed in 2006 and have four albums and numerous European tours under their belts. Whilst their sound is rooted in doom, they stand out. Vocally outstanding and dropping a doomy growl for something a little more majestic. Meanwhile the songwriting from the band, whilst laying foundations in doom is more expansive and thought provoking.

This October they unleash ‘Violet Hour’ on the world. Recorded at Foel Studios and produced by Conan bassist and Electric Wizard producer Chris Fielding. With such a prodigy behind the mixing desk you know the sound of this album is going to be huge.

Album opener ‘Trapped & Bound’ starts with a majestic stoner rock riff, much different to what I was expecting. This song, the most upbeat on the album, fluctuates between stoner and heavier doom in parts. The transitions steered by the vocal delivery from Sian Greenaway. 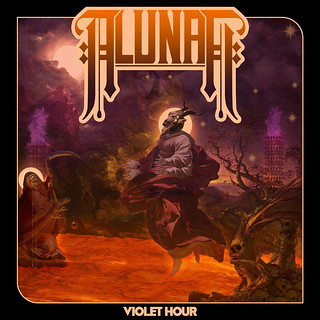 Make no mistake this is a solid doom album, and whilst ‘Trapped & Bound’ teased a little stoner rock, the foundations throughout the entire recording are heavy doom led by that beautiful dirty guitar and heavy as hell bass. Jake’s wonderful drum intro on ‘Dance of Deceit’ leads into a modern day drum classic. The riff segue at the midpoint suggests an influence from the band Ghost, a quiet unexpected interlude, but works magically on this number.

As the album progresses further the doom sound grows louder. Those guitar tones set an atmosphere, it makes the hairs stand on your neck at points. Sian’s vocals give the band an extra dimension. This isn’t traditional doom with a growl, her contribution gives the sound depth and feel and it sets the band out from the pack.

I’m between the doom laden behemoths of tracks on this album, their are pieces of experimentation in sound and structure. ‘Hypnotised’ lives up to its name, with formidable segments that leave you entranced in an out of world experience.

The album is a triumphant piece of doom mastery. Fans of doom will need no encouragement to check this out. But if you’re new to the genre I encourage you to give Alunah’s latest work a listen. Expansive doom at its very best.

Last month, we caught up with Alunah drummer Jake prior to their appearance at Uprising. Check out his interview here.