Back in the 1990s Cradle of Filth were as dangerous as they were divisive. They were breathing life into the British Black Metal scene and touring with the likes of Emperor; they were the poster-boys of the anti-establishment, were paraded alongside the likes of Marilyn Manson as the end of everything respectable and even featured on the BBC, in a documentary series called Living with the Enemy.

Cruelty and the Beast was their third album proper and their first concept record, telling the tale of Hungarian Countess Elizabeth Bathory. Prior to this they had honed their skills on the still impressive The Principal of Evil Made Flash and Dusk… And Her Embrace and would follow it with, the yet to be surpassed, Midian.

A brief history lesson to place Cruelty and The Beast into the context a band at its most creative and regardless of the Marmite-qualities Cradle of Filth still radiates, no one can deny their importance to the history of extreme music.

This remaster, endorsed by Dani Filth himself, doesn’t include any bonus material and is instead a faithful representing of the 1998 album. From the very beginning Cruelty and The Beast ’19 sounds massive. The production has taken the, in comparison, somewhat tinny sound of the original and has boosted up to eleven, The vocals are cleaner, in their sound rather than in the delivery, and more textured with a myriad of other voices heard layered in the mix. The Gregorian chanting in Once Upon Atrocity is better defined, the eerie subtext running throughout the album is more ominous because of it, the female vocals of Thirteen Autumns and A Widow become more haunting. 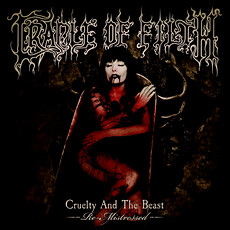 Everything on this version of Cruelty and The Beast sounds sharper; from the clean, crisp twin guitars of Beneath the Howling Stars and the sharp tones and screaming bends of Desire in Violent Overture to the precise and crystal clear drum hits of Cruelty Brought Thee Orchids.

The epic Bathory Aria becomes the grandiose musical monument it was always meant to be, with the opening piano lines being presented in the most sumptuous clarity possible. Cradle of Filth are not offering anything particular new to Cruelty and The Beast. There are no extra tracks, no live recording, no demo version on offer here. Instead they present their 1998 masterpiece sounding better then ever.

There will be many who eschew this version as a work of blasphemy. There may be many who baulk at the audacity of returning to a record they found so important to their angst-ridden adolescent years. But the response to this version of Cruelty and The Beast is in the ear of the beholder. I loved my old VHS copy of Halloween, with the need to track it in whenever I played it, but was the first in line to get the DVD and then the Blu-Ray when it came out. Doesn’t change how I remember watching it originally, just now I can see its details more clearly.

Cradle of Filth releases the remastered 'Cruelty and the Beast' via Music For Nations on November 1st.