Album Review: Blind Guardian - Imaginations From The Other Side (25th Anniversary Edition)
Reviewed by Paul Hutchings

The fifth album by German Power Metal legends Blind Guardian, ‘Imaginations from The Other Side’ is widely regarded as one of their best. The final album to feature vocalist Hansi Kürsch on bass duties, the album also featured Andrė Olbrich and Marcus Seipen on guitar and Thomes Stauch on drums. The album was bombastic, over the top and quite glorious with songs such as the epic title track, ‘I’m Alive’, ‘Born in a Mourning Hall’ and ‘Bright Eyes’ all becoming firm live favourites. Remastered in 2007, the album now gets a 25th anniversary release with the first opportunity to hear the band performing the album in full at a show in Oberhausen, Germany in 2016. And it is magnificent. 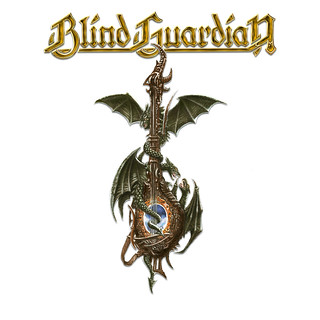 If you love Blind Guardian, and let’s be clear, you either love Blind Guardian or you hate them, there are no grey areas with this band, then this show will be simply brilliant and a loyal and exhilarating representation of them in the live arena. With the addition of drummer Frederik Ehmke who joined the band in 2005 at the core, as well as the usual smattering of loyal live musicians, the Germans are on fire from start to finish. Roared on by a rabid and passionate crowd, this is as bombastic as Blind Guardian get. Musically Guardian are tighter than the proverbial Scotsman’s wallet and there are some scintillating moments. The intro builds the drama, the tolling bell leading into the belting title-track which works magnificently as a set opener, the crowd straining every sinew to sing along with Kürsch as the band hit the accelerator. Ehmke’s drumming is simply insane, the powerful battery he maintains throughout the whole show mesmerising. ‘I’m Alive’ sees the crowd singing along at full voice, matched by ‘Another Holy War’ for blistering pace, ‘Born In A Mourning Hall’ is explosive whilst the choral efforts of the massed Guardian army on ‘Mordred’s Song’ and ‘Bright Eyes’ is uplifting.

If you don’t like the explosive style of power metal, this special edition will do nothing for you. But, if you appreciate the stellar interplay between musicians, the soaring harmonies of Kürsch and the rest of the band, then this could be played for hours without tiring. It is that good and one gig where you truly wish you could have been in the audience.

Alongside the live record, this package brings another two and a half hours of material. The 2012 remix and remaster of the album provides you with its sharpest production and reinforces just how good the album is. As well as this, there is a selection of instrumental versions of tracks, a remastered version of their 2007 cover of Uriah Heep’s ‘The Wizard’ and a handful of demos. Whilst some of this material is aimed at the hardcore fans, and you need to be cautious when ordering as the vinyl doesn’t include everything, the live set and remastered version of the album are worth the price of any order.

“What can I say? A brilliant album celebrates its 25th anniversary. It is great to celebrate this in such a bombastic manner. Luckily, we filmed our 2016 show in Oberhausen when we performed the entire album live. This is the perfect moment for us to present this masterpiece in so many different facets. An ideal resurrection of precious memories long gone, but not forgotten. This album is made for eternity… I hope. Enjoy.”

Enjoy indeed. This is an album that demands you crack open a German beer, play it loud and celebrate the 25th anniversary of a seminal album.