I've seen a few concerts in the USA over the years, from club gigs in New York to Black Sabbath at the Hollywood Bowl in 2014. When an already booked trip to the Big Apple coincides with the announcement of the Swedish invasion of Amon Amarth, Arch Enemy, At The Gates and Grand Magus, it seemed rude not to grab a ticket and check it out, especially as I can't make the UK Amon Amarth/Arch Enemy tour later this year.

The Hammerstein Ballroom in the Manhattan Center is a grand setting and has been the stage for a variety of events from opera to theatre to wrestling. It has hosted Iron Maiden, Guns N' Roses and David Bowie's final public performance in 2006. The 3500 capacity venue has good sound even up in the side boxes where my ticket is located.

Grand Magus, long one of my favourite bands, are by far the least well known of these bands in the US. A good crowd gathered early for the five song set which kicks off with 'I, The Jury' followed by new song 'Untamed' from the album 'Wolf God'. The reception from the audience was good and they got going during 'Like the Oar Strikes the Water' and 'Iron Will', before joining the customary sing along in closer 'Hammer of the North'. A good performance from JB, Mats and Ludwig overall although they did seem a little nervous at the start before the crowd warmed to them. Hopefully this tour will give them the exposure they need in the US. 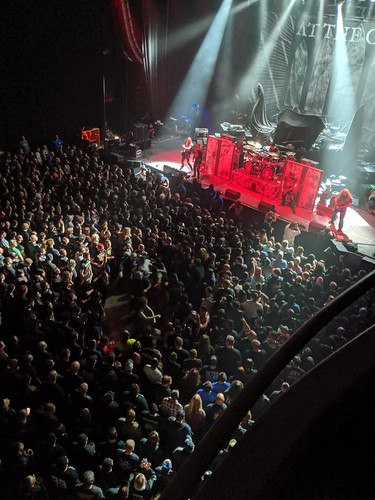 At The Gates are up next and provide the set of the night. 'Der Widerstand' leads into 'To Drink From the Night Itself' from their latest album, and is a cracking start for the Gothenburg boys with crowd right up for it from the start. A couple of large pits open up immediately and keep going throughout the set. The set is dominated by tracks from 2014's 'At War With Reality' with the title track, 'The Night Eternal', 'Heroes and Tombs' and 'Death And The Labyrinth' all making appearances, along with 'Slaughter of the Soul', 'Blinded by Fear' and 'Cold'. Tomas Lindberg keeps the crowd in the palm of his hand throughout and a very assured performance by At The Gates leaves us all wanting more.

Arch Enemy have a difficult job following that performance and for me it was nothing special and what I expect from them. I was more of a fan of theirs when Angela Gossow was fronting them. She had a much more malignant presence both on record and on stage. Alissa White-Gluz is fine but for me, her performances often look more rehearsed and less passionate then Gossow. The show tonight is good with staples 'War Eterna'l, 'Ravenous', 'My Apocalypse' and 'As The Pages Burn' going down particularly well with the crowd. There are 3 tracks here from their latest slab, Will To Power - 'The World Is Yours', 'The Eagle Flies Alone' and 'First Day In Hell' but the highlight is the closer, 'Nemesis' from 2005's Doomsday Machine. Arch Enemy did a good job of getting the crowd going but they were certainly my least favourite band of the night.

Let's face it. You know what you're going to get from Amon Amarth. They have been doing the same thing for almost 20 years now and don't look like changing their formula any time soon. Some have said that more recent albums Jomsviking and Berserker haven't had the power or effect of earlier efforts, but live they always put on a show.

A black curtain with a rune logo above 'BERSERKER' covers the stage as Maiden's Run To The Hills blasts out of the PA accompanied by the entire crowd. The set opens with a curtain drop, a massive flash and enough fire to keep Midtown Manhattan in barbeque for a week. 'Raven's Flight' kicks us off before a trip back to 2002's 'Death In Fire'.

The stage is based around a viking helmet which has screens for eyes. Ramps up either side provide some height differential and somewhere for the band to retreat to (hide?) while a couple of viking battles take place front and centre. The rest of the main set is predominant with newer tracks from Berserker, 'Jomsviking' and 'Deceiver of the Gods'. The highlight is 'The Way of Vikings' which is a great tune and during which about 50% of the sold out crowd sat on the ground and started rowing. I thought the security guard in the box, who was already in a state of shock watching the mosh pits from above, was going to need medical attention. He clearly hadn't worked a metal gig before but by the end was certainly enjoying the enthusiasm of the audience if not the music.

The set ends with staple sing along 'Guardians of Asgaard' and 'Raise Your Horns', before the band returns with classics 'The Pursuit of Viking' and 'Twilight of the Thunder God'. I've seen Amon Amarth about 10 times from supporting Testament, the Jomsviking launch show at the Underworld and headlining Bloodstock and I have enjoyed every one. This is no exception and the band goes all out from start to finish to provide a devastating end to the evening. 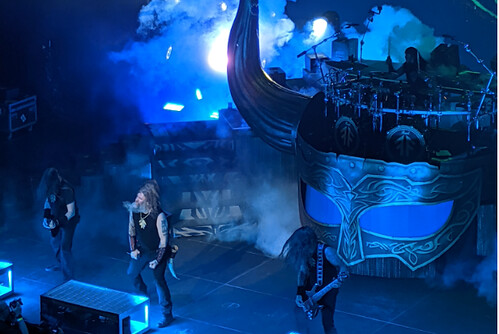