With their 2018 debut 'Lightbringer' well received, the Finns from Tampere have wasted little time in hitting even harder second time around with sophomore release 'Firebride'. A seething cauldron of blues, sludge, black and death metal, Black Royal unashamedly pin their colours tightly to the mast. This is an experience described as ‘Death Blues’, a brutal combination which puts much pressure on the cranium and rib cage due to the ferocity that is unleashed. The symphonic introduction on 'Coven', a gentle and beautiful piece, totally misleads you, the calm, before the storm is unleashed, any remaining delicate elements soon swept away in a fiery cavalcade of sludgy downturned guitars and guttural vocals. 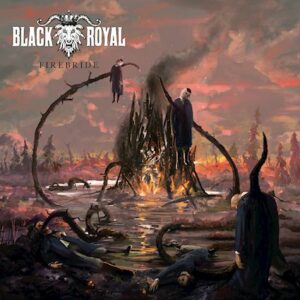 Black Royal’s latest foray into the fields of Wicca continues with first single, 'Pagan Saviour', inspired by the witch hunts, paganism and war between early Christianity and ancient mythology. Influences from the black metal and modern sludge are evident more richly on 'Pagan Saviour' than on the previous release, with shades of the majesty of Polish titans Behemoth blending with the raw aggression of Entombed and Dismember and the sludge of Acid Bath and Down to create a massive song which contains enough melody to land a feisty hook or two.

Whilst the sludgy elements of the release may be slightly less prominent, they are by no means hidden. The hoarse roars of vocalist Riku Niemelä rage from start to finish and fit with the overall style neatly whilst sole guitarist Tony Morjes shoulders the responsibility with ease. Elements of early Mastodon echo on 'Gods of War', the groove reminiscent of Blood and Thunder in places but Black Royal don’t have to follow anyone, such is the strength of their own sound. The title track is another gravel-soaked example of the band’s power, bruising and heavy, thunderously powerful, this is ripping stuff. Final song 'For the Dead Travel Fast' signs off in epic style, choral voices sing out above the rampant sea of riffage and conclude an album that is brutal, punishing and at times suffocating in its intensity.

Firebride was recorded live in Studio Watercastle – a small town in rural part of the Pirkanmaa region of Finland, and later completed in September 2019 at the band’s own Armless HQ studio. It was mixed by Jussi Kulomaa and mastered by Jaakko Viitalähde. The album will be released worldwide on 14th February 2020 on Suicide Records.