Let’s turn our heads now to some Grindcore. It has certainly been a hot minute since I wished to check out some new Grindcore material however, that’s where Sonic Poison come in to shake things up. Looking to see a late January release, Sonic Poison are a Finnish extreme metal act out from Tampere who specialise their sound as a hybrid fusion of Grindcore with Death Metal. The band formed in 2012, yet their first Demo, Harsh Demonstration, wasn’t released until 2016. The following year saw their first EP and a Split with fellow death metal act Axeslaughter in 2020. Another three years since, Sonic Poison are poised to finally unveil what will be their dearly awaited debut album. So, it’s been some time since I dove into some Grindcore and I thought Sonic Poison, and their record Eruption, would be a good place to do just that.

If there’s one thing Sonic Poison manage to capture right out of the gate, it’s speed. Granted, there are possibly other bands who do play just a little faster than what these guys move at, it’s the way that sensation of intensity is related to us that separates Sonic Poison apart from so many of their likeminded ilk. Now with this being Grindcore, that sense of speed is more than anticipated but few are able to get your blood pumping and your heart racing as vehemently as Eruption manages to offer. The guitar tone has this scraping yet light essence to it which enables the band to raise the level of intensity to their sound all the while that very onslaught isn’t overbearing on us, allowing the audience to absorb all that is coming their way; an awful lot of I may say so too. Add to that the sheer rapidity and absence of space between tracks and you’ve got a record that’s effectively looking to strangle you from the get go.

One major component of this speed emanates from the drums. Considering the record isn’t too concerned with providing anything overtly crushing or cavernous, it’s genuinely remarkable how heavy on the bass Sonic Poison appear to be. I wouldn’t pin that down exclusively on the bass guitar either, for the bass drums, during their most aggressive and tempestuous points, provide some downright devastating flurries that not only amplify the band’s tenacious assault but also help to fill the album out just that extra amount. It’s amazing how well the band’s instrumentation works in tandem with each other, filling in spaces that the other element may be lacking in. With opposite ends of the timbre spectrum cooperating, the band establishes a performance that doesn’t merely come across as pure violence. This is an album that understands the more minute details for what complements a high-quality grindcore record. Sheer chaos only won’t endear fans; whatever Sonic Poison have working for them certainly will. 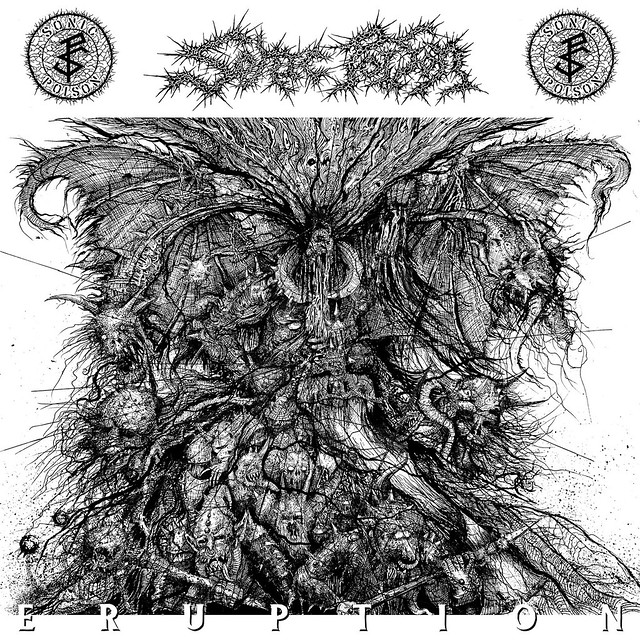 With some Grindcore acts, it can be telltale of that respective band’s songwriting capabilities where their individual tracks may have all the malice and power fans are looking for, yet harness little in the way of songwriting prowess which will always entice us back for repeated listens. It’s on that note that especial praise needs lined up towards Sonic Poison; it cannot be understated how fast and aggressive the band have rendered their sound herein, but in spite of that they still went out of their way to make this as coherent and structured as they could so we, as the listener, can still understand routinely where we are being taken. At no point did I feel lost within some formless twister where everything revolves around me to no conception of shape or idea; I always knew where the individual track in question was taking me, I always knew what the riff had for me and due to this, the relentless performance forever maintained a sense of place. I may be wild but the band have a firm leash on it; this isn’t an album that’s going to run off on us at all.

The vocals are worth mentioning too. It works well to the band’s style of songwriting and production that the vocals, rather than be a gruff or guttural performance, are in fact something along a much more blackened form of delivery. We can hear it in the visceral, higher-pitch performance he clearly delivers; that’s the crux here, the clear way his words are able to come forth and strike through the sheer wall of sound the instrumentation otherwise purports. I think, had this been a more typical vocal delivery with a deeper timbre, the vocals wouldn’t have had as much of an impact on the sound this record harnesses than what we’ve otherwise got here. Since the vocals feel lighter and more razor-bladed, they’re able to bounce off the record’s walls, riffs, drums etc with exceeding velocity; before you know it, you’ve been pummelled by a string of vocals, the riffs have come in to take over and once more, the vocals return to unleash another barrage of visceral mayhem before you, all the while you’re revitalised and ready for what’s to come. It’s an excellent vocal performance that benefits not only the band’s style but the very record they’ve crafted throughout the producing and mixing stages.

In conclusion, Sonic Poison’s first full length release, a work some eleven years in the making, is a bonafide triumph for the band. I’d go so far to say this release should propel them to the pedestal likes of Rotten Sound, Napalm Death, Pig Destroyer etc. The band’s ability to balance absolute sonic carnage with thought out songwriting that feels planned and deliberate is a joy to behold when Grindcore, one of extreme metal’s bastard children, often gets shoehorned into simplistic stereotypes; the truth of the matter is great Grindcore is hard to come by because it’s hard to make. It can be easy for instrumentation to be ruthlessly quick, throw in some savage, snarling vocals and call it a day and a record but a band like Sonic Poison understand how to go about it properly, whereby you not only feel the adrenaline rush but also the knowing that you can and wish to return to this record for round two, three and so on. At just on half an hour long, Eruption is precisely that; coming along to punch you square in the throat and leave with zero fanfare or acknowledgement of their deeds, Sonic Poison have crafted a deeply worthwhile record that is completely worth your time and money. It’s been some time since I checked out a quality Grindcore record.