There are solo projects and then there are solo projects. Rebirth by Blasphemy, the fourth album by Midnight is a viciously raw, low end produced slab of speed metal, black metal and punk which has been dragged screaming through the blender. Midnight is of course, the sole domain of Athenar, who hails from Cleveland and who has been producing his own blend of metal since 2002.

Throughout the album there was only one real comparison that I could make and that was the sheer intense and unrefined style that Venom brought when they burst on the scene way back in the early 1980s. Fucking Speed and Darkness provides the first salvo, and immediately it’s the low level production and gnarly delivery which grabs you tight and refuses to let go. Raggedly fast, it hurtles out of control for just shy of four minutes, allowing just enough time to catch the breath before the throttle is depressed again and the title track lurches in at top speed. The vocals are aggressive, snarling and unpleasant but I doubt that Athenar would have it any other way. It’s certainly old school in feel, uncomplicated in style but with enough hooks to maintain interest. Escape The Grave was one of the first songs he wrote for this album and It’s another dirty, punishingly fierce track which catches the ear with its raucous pace and soiled riffing. 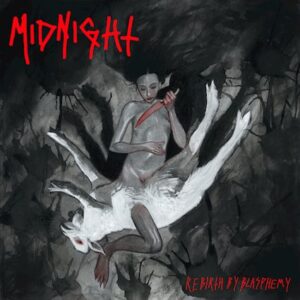 And so, it continues. Unconstrained, unrefined and intent on the expulsion of all things rotten. Take Devil’s Excrement. Aside from the ridiculous title, this is just ludicrously fast, lyrically repulsive and blisteringly good whilst the stomp of Rising Scum echoes Priest circa 1979, albeit with a very different vocal delivery.

At times you wonder if this album is verging on the dreadful, but there is something quite heartening about the whole almost binary approach. Athenar’s vision is simple. "Rebirth By Blasphemy is a rebirth. It's a change in life and it's a rebirth of doing whatever the fuck you want and seeing what happens after that. It's about saying yes, taking opportunities, taking a fucking chance." That viewpoint is certainly encapsulated in every track, such as the pulsating Warning from The Reaper, which sounds like the bastard love child of a filthy three-way between Motörhead, Venom and Slayer. The 1980s black metal lyrics are routine, but the songs here are ridiculously catchy, possessing more hooks than a fleet of Japanese whalers.

Rebirth by Blasphemy is deliberately unfussy in its production. Handling every instrument himself, the recording process was a straightforward one for Midnight. Recorded at Mercenary Studios with the assistance of Noah Buchanan, the whole album was completed in a matter of days. Whilst the apparent disregard for that does surface, there is no doubting the voracity or the passion which has been poured into this release and that’s what makes this album so enjoyable. However, it probably should come with a health warning; Rebirth by Blasphemy is likely to damage your ears and trouble your mind.