Thorn are a pretty new band on the death/doom scene and yet within this brief time, since 2020, they’ve managed to already release a plethora of material which, alongside some Splits and EP, includes two albums including this piece here: Yawning Depths. Slated for a February release, Yawning Depths is primed for an independent release more than likely through Thorn’s bandcamp. Their first album, Crawling Worship, dropped back in June of last year so Yawning Depths comes less than a year following on; that’s impressive by any means and especially during the global circumstances going on right now. This was just one album of the upcoming 2022 releases which drew my attention and therefore, I was rather excited to see what Thorn would deliver especially considering how this doesn’t even run on to a half our duration. So, let’s see what this US death/doom act is all about.

The vocals are rather unique for an album labelled as death/doom but they’re frankly a welcome change to the whole routine. We often know what kind of vocals we’ll get from death/doom so the way I’d describe Thorn’s vocal performance is an intensification of those aforementioned vocal deliveries. This isn’t a performance that allows you to sit back and bask in the warped atmosphere, it may as well punch through the record and grab your throat because you can be certain that for the entire duration this album plays for, this record and vocal performance isn’t letting go. It’s not as ferocious or frantic as other death metal performances may give you but you’ll be hard pressed to find a recent vocal performance that’s as commanding and in your face as what Thorn can boast of. It’s hard not to take notice of them not only because they’re at a particular position in the mix but, the sonorous tone they come at you with means they’re never going to be drowned out by any riff or drumming track. The vocals are inescapable, a theme we’ll touch upon later on.

It may be a work of death/doom however Thorn really do not wish to hang around here. It feels so good knowing that, even during a first introductory listen, I can listen to a death/doom album and not have to worry about an overly elongated runtime. At less than 25 minutes long, the band give us something that is truly the epitome of “get in, get out” however we mustn’t let us believe that the short runtime results in a hollow album. For every moment the album is playing, there is a plethora of material and quality to take away from it. Since the band don’t have time to give us anything dramatic they let us get stuck into their sound straight away across every song, it allows us to get on with the album without feeling like it’s dragging us somewhere we don’t want to go. As a result, the album feels like it took only the most rapturous and destructive portions of the band’s songwriting and distilled it until all that’s left is what you get on record. It’s also remarkably steady paced too, the short runtime hasn’t caused the band to rush from one track to another. The record flows organically and there’s never the fear that you’re losing potentially valuable quality because the band, as short as some tracks are, spend enough time for what is necessary in order for the album to hit the targets the band have highlighted. 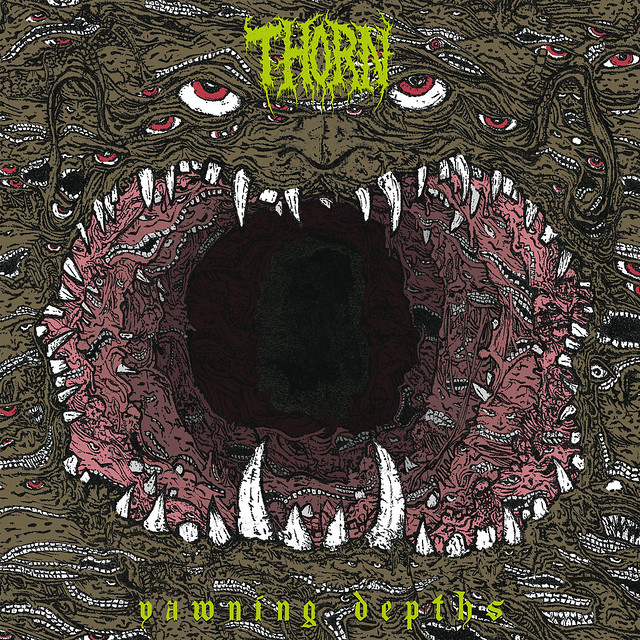 I liked how the band really utilise a dirtier than usual guitar tone for their sound. This isn’t the kind of album that’s going to throw a massive wall of sound at you and expect you to still be supporting its weight, if anything the band’s choice to forgo a wall of sound via a crushing soundscape works well for them. Here the guitar tone is raspy, it scrapes and scratches and gives you the sandpapery and uncompromising riff performance which the band on the whole demonstrates. It’s evident from the first track alone that the band still want you to feel their performance, which you most certainly do if not from crushing weight, then certainly through intensity. The band have crafted a sound that feels exquisitely feral without it coming across like you’re expected to put in some effort to maintain its power. You can practically feel this record roaring at you, bile and snarling saliva and all; the gushing and serrated throat bellowing forth. But it’s also kind of refreshing to get a death/doom record that chooses not to embrace what their contemporaries have elected for, instead offering us something that ignited in our faces and instils that sense of dreaded panic.

When you think of death/doom you may initially conceive an album that’s meticulously pieces together, to establish the band’s command of atmosphere and mood. What I have to commend Thorn for, in this instance, is how they completely throw that notion, that perceived rule through the window. Instead Thorn give us a soundscape that utterly revels in chaos, in the unmitigated disbelief of what one can hear at one moment. Thorn’s mixing has enables us to feel lost within this swirling cacophony, and while this may sometimes be deemed a drawback I believe it really benefits the band’s wishes, primarily because this is clearly their intention. You aren’t introduced to this record as much as you’re thrown into it; you don’t listen to it as much as it grabs your throat and demands your attention. Instead of watching from a distance, Yawning Depths surrounds and ensnares you where escape is a feeble hope.

In conclusion, I want to say just how fierce this album is. For an album that doesn’t even begin to approach the half hour mark, this is one fulfilling and addicting performance. I think what makes this album work so well is that it doesn’t try and phone its death/doom aesthetic in too greatly; if you want to view this as a purely death metal release it allows you the freedom to do so. The band aren’t limiting themselves on what sound they are and simply allow you to experience and enjoy all they have in store for you. But I loved how uncompromising and ecstatically chaotic they allowed themselves to be without the mix feeling like it was too busy at all. They managed to balance it just enough that you get this hurricane of death without it coming off as too haphazard and jumbled up to make sense of it. That’s what gives this record it’s edge: it’s a brutal and devastating display but it never leaves your grasp or your ability to make coherent sense. It’s like harnessing raw and wild energy, it could go anywhere it wants yet you can feel it writhe and pulsate in the palm of your hands. For anyone looking for something savage to sink their teeth into, this is a sublime album that also won’t take up too much time. Highly recommended.