I have been a fan of Rage since 1988, when I first heard the rather splendid ‘Perfect Man’. If you’ve never heard of them they are a pretty prolific German band, and over the last 35 years they’ve released 24 studio releases (26 if you include the pre-Rage, Avenger years, although there’s a bit of controversy on the actual number), and although they are a very different band to the one that started back in 1985, both in name, members and sound, they have always released quality albums.

Rage base their music on great riffs, strong hooks and powerful choruses which straddle the line between classic, power and thrash metal, with a few other influences here and there. This current line-up is made up of founder and every present Peter ‘Peavy’ Wagner (vocals and bass), Marcos Rodríguez (guitars) and Vassilios "Lucky" Maniatopoulos (drums), and ‘Wings of Rage’ is the third release together, and for me the strongest of the three, the first two ‘The Devil Strikes Back’ and ‘Seasons of the Black’ although being solid albums in themselves, did see the band struggle slightly to step out of the shadow of former guitarist Victor Smolski, a man of huge talent, a composer and multi-instrumentalist, but also with an ego to match that talent, Peavy ditched him a few albums back after feeling like a "stranger in his own band". 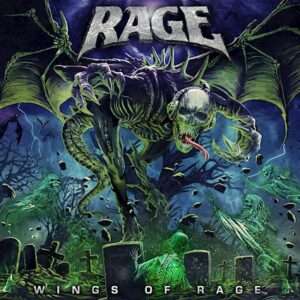 ‘Wings of Rage’ sees the band build on those two solid albums and take little bits of their own history to create a very strong release. ‘True’ is a great opener, with a dark groove and yet with a very sing along chorus, ‘(Let Them) Rest in Peace’ is going to be a real crowd pleaser which will whip up any crowd into mosh pit, very raw and powerful. ‘Chasing the Twilight Zone’ is super catchy, and with a little teaser intro, ‘Tomorrow’ is symphonic and hymn like in the chorus and with a very positive feel. While the title track is a typical Rage thrasher, combining all the elements I mentioned above with a very heavy main riff, plenty of speed, a bit more complexity and soaring melodies.

‘A Nameless Grave’ mixes things up and sees them take elements from their own ‘Lingua Mortis’ and ‘XIII’ releases (remember Rage combined playing with an Orchestra long before Metallica did ‘S&M’) by adding strings and subtle keyboards to a very powerfully and emotional song, which also has one of Marcos’ best solos. ‘Don’t Let me Down’ has some of the fastest parts on the whole album and races along until the slower chorus, again with those strings reappearing, together with some female backing vocals for contrast, before blasting off again for the verse. This then segues into another slow burner, and possibly my favourite track, the incredible ‘Shine a Light’, which has some of Peavy’s best lyrics ever, with some really deep passages and a chorus which makes your hairs stand on end, and another emotive solo, brilliant stuff.

‘HTTS 2.0’ follows, a re-recording of their old evergreen: ‘Higher than the Sky’ which adds a new level of heaviness, and other modernising tweeks, perhaps there was no real need to redo this old classic, but it is one of their best songs and it’s interesting to hear the differences between the two versions, they certainly treat it with the respect it deserves.

The band then close down the album with two real belters, ‘Blame It on the Truth’ has a heavy down-picked riff and an uplifting chorus, while ‘For Those who Wish to Die’ is a real barnstorming mini-epic with a few surprises along the way, especially in the chorus. Production wise, Rage have always been on top of their game, and here is no different, this time they handle the job themselves and the sound is huge, the drums are massive and the guitars are punchy with plenty of crunch and bite, while the bass is full and fills the space nicely. Peavy’s vocals are possibly his best for quite a few albums, being suitably gruff and yet melodic. The cover art also needs a mention, as it’s the best they have had for quite some time. Rage always deliver, in their whole 35 years history they honestly haven’t released a poor album; OK some albums are better than others, and although they don’t drastically change their core sound, at the same time they are capable of the occasional surprise. ‘Wings of Rage’ isn’t so much of a surprise, but I’m a little amazed, although I really shouldn’t be, at how heavy, consistent and basically how good this album really is, it’s quite possibly their best since ‘Speak of the Dead’.

If you like power metal, or just metal in general, then you really need to check Rage out, you won’t be disappointed. Now all we need to do, is convince them of doing more dates in the UK.

Rage release ‘Wings of Rage’ via SPV on January 10th