Symphonic metal? Female fronted metal? Pah! No such thing if you ask me about the latter. What’s a label these days anyway? Nearly two decades into their career, Dutch band Delain continue to challenge the tags and refuse to be pigeonholed. Sure, they have a female singer, and a bloody good one in Charlotte Wessels, and they use operatic elements in their music but what they are most of all is a solid, interesting and enjoyable hard rock/metal outfit who play high quality music. If you don’t like it, jog on.

‘Apocalypse & Chill’ is their sixth album, following on from 2016’s ‘Moonbathers’. I think it may be their strongest album yet, a curious hybrid combination of soaring symphonics, raging guitar riffs and some delicious melodies. Exploring themes of impending doom and human indifference, there is enough variation here to appeal to most open-minded metal fans. The opening duo are almost Scandinavian Eurovision, ‘One Second’ and ‘We had Everything’, full of pomp, bounce and clean melodies. Wessels vocals have developed greatly since those early days of ‘Lucidity’, her classical training continues to be put to great use. There is an industrial stomp to ‘Chemical Redemption’, searing riffs mixing comfortably with the clean keyboards of fellow founder Martijn Westerholdt. 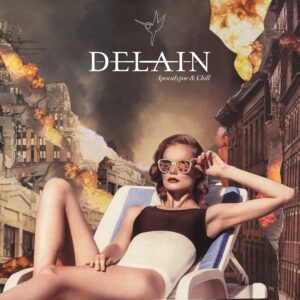 Delain have pushed their sound here but not so hard as to alienate their loyal fan base. ‘Burning Bridges’ is about as established a sound as you can get, the vocal enhancements embellishing rather than detracting from the song. The addition of guest vocals from Beast in Black’s Yannis Papadopoulos on ‘Vengeance’ adds massively, the huge choral sections and dramatic operatic elements demand that this should be from a massive motion picture such is the epic feel.

Elsewhere Delain switch styles with ease. ‘Creatures’ contains some of the heaviest riffs the band have delivered, Timo Somers shouldering the guitar responsibilities comfortably since the departure of Merel Bechtold (whose closing contribution to the band is the excellent ‘Masters of Destiny’). A total change of pace follows with the piano heavy ‘Ghost House Retreat’ which proves one of many highlights of the album, Wessels performance amidst strings and haunting vocals just stunning. Meanwhile ‘Combustion’, a five-minute plus instrumental which closes the standard edition allows the band to really let loose, Somers exquisite playing combines with Westerholdt’s subtle keys, the thundering bass of the best named musician in metal today, Otto Schimmelpenninck van der Oije and the reliable drumming of debutant Joey De Boer. Take a punt on the extended edition and you also get three stunning orchestral versions of ‘Vengeance’, ‘Masters of Destiny’ and ‘Burning Bridges’ which are well worth a listen.

Wessels has been quoted as saying that “we think ‘Apocalypse & Chill’ will surprise our listeners. It is heavy with new influences and we’re really curious to find out how our audience will respond to that”. There is certainly a contrast which may not have been as pronounced in previous albums, and it will be intriguing to assess how the new music fits into their set on their current short UK run.

Delain's 'Apocalypse & Chill' is out now via Napalm Records