How many of us actually sit and just listen to music these days? Has the act of listening to albums in their entirety, just focusing on the music, without distraction sadly become an indulgence and one rarely undertaken? It’s safe to say, in many cases that music is often an accompaniment to other acts or tasks in our lives and therefore the depth, character and feeling of albums often gets lost. Writing a double concept album clocking in at nearly 80 mins could be seen by some as a risk and a bold move especially in the streaming and digital age that, like it or not, we are fully in the grips off.

Sometimes however risks are worth taking within music and in ‘Mandala of Fear’, Huntsmen have created an album that once you’ve invested some time in, the true appeal and brilliance of a well crafted concept album will be appreciated.

Lead single ‘Ride Out’ kicks things off and its instant accessible catchiness belies the frightening and unnerving dystopian warring world at the heart of the album. The male / female combination on vocals adds layers to a song that is a great introduction to how things will develop over the next 80mins. Its heavy music that is afforded space and where needed also time. The songs have a fuzziness and warmth that may sound twee but it’s far from that. The underlying feeling of unease also contrasts that warmth. 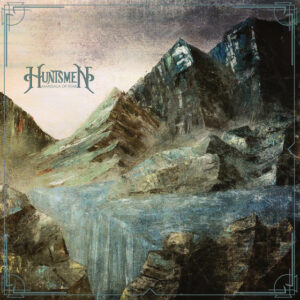 The infectious nature of the songs be it the rumbling bass driven space rock of ‘Collossus’ to the masterful instrumental ‘Atomic Storms', with is swirling hypnotic outro means the songs stand out as solid slabs of modern day rock that encompasses many influences. ‘Huntsmen’ tastefully acknowledge their creative inspirations and the heavy grungy sound is a tasteful and perfectly delivered mix of doom, stoner and alternative rock. There is a wonderful togetherness, as cliche as it sounds, between the drums and bass. They truly do hold everything together and drive the album powerfully forwards. If Huntsmen can transfer that power and tightness into the live setting they’d be an awesome and exciting prospect to see.

They can hold their own though in the "heavy" stakes. ‘A Nameless Dread’ with its distorted muffled vocals pulls you in and twists you further down into the nightmarish depths of the war ravaged concept. Blastbeats and screams trade blows with a solid slab of angular alternative rock at its very best. After the slower mid section of the album things really pick up pace.

It’s real variety is the albums strong point. With four instrumental songs to change the dynamics further ‘Mandala of Fear’ shifts along ebbing and flowing keeping the interest constant. If the pummeling groove of instrumental ‘Pirates of the Waste’ into the disturbing drawn out chords of another instrumental ‘Hill people Drugs’ shows Huntsmen’s brave arrangements then the final instrumental ‘Loss’ sees them clearly wearing their progressive and Americana influences on their sleeves.

It’s refreshing that Huntsmen have delivered a double album that is exactly that. An album. ‘Mandala of Fear’ is not merely a collection of songs yet an album that feels cohesive, together and ultimately offers a very rewarding listen.