Stoner rockers Black Rainbows return with their 8th album in 'Cosmic Ritual Supertrip' and a fine thing it is too. Blending standard fuzzy stoner rock with the feel of the 70’s, these Italians take the listener on a journey through Americana on a Harley Davidson that would look out of place in their native country. No Vespas here!

Opener ‘At Midnight You Cry’ sets the tone nicely with a fast paced fuzz-fest before ‘Universal Phase’ turns down the speed and ups the heaviness and doom. With a more traditional 90’s rock feel ‘Radio 666’ which has a definite Monster Magnet vibe to it, before ‘Isolation’ re-introduces the fuzz and adds some blues guitar for good measure. 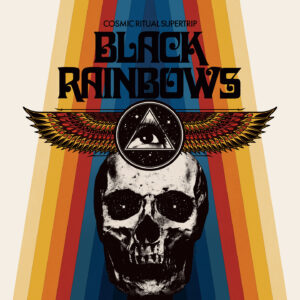 The middle of the album is where the titular Supertrip comes into full effect. Two tracks full of doomy psychedelia in ‘Hypnotised by the Solenoid’ and ‘The Great Design’ show the softer side of Black Rainbows and are both excellent. ‘Master Rocket Power Blast’ does what it says on the tin, raising the tempo and provides the catchiest riff and solo on the album. ‘Snowball’ is slower and bluesier but no less heavy and another highlight. Both ‘Glittereyzed’ and ‘Sacred Graal’ are more traditional stoner tracks, starting slowly before building to more frantic conclusions.

‘Searching For Satellites Part I and II’ is more of an acid trip through the 60’s accompanied by acoustic guitar and tambourine which is great but may have had more impact earlier in the album to break up the heavy. Final track ‘Fire Breather’ is probably the heaviest and most doom-laden song on the album which like a few tracks here, ups the ante towards a frenetic closing.

'Cosmic Ritual Supertrip' is out now on Heavy Psych Sounds.