A couple of weeks back a good friend of mine and I were talking about the current metal scene, while chatting my friend had told me about a band called Burning Witches, which up to this point I hadn't heard about, right there and then and he showed me the music video for Dancing With The Devil and said "Listen to this right now, you wont be disappointed" and what it was safe to say I was not disappointed and since then I have been a massive fan.

Burning Witches are a heavy metal band from the land of clocks and Toblerone... thats right Switzerland. This all female band have been around since 2015, up to this point have released 2 albums and have recently released 'Dance With The Devil' via Nuclear Blast. 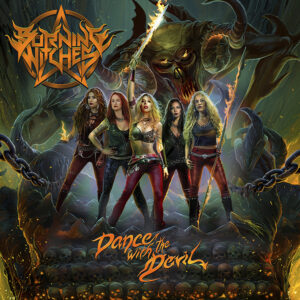 This eleven track heavy metal masterpiece brings a lot to the table with riff after massive riff throughout the album. Along side this is the new addition to the band; Laura Guldemond's vocals are similar to those of Rob Halford’s, its safe to say she was a perfect fit for the band.

The album starts with an atmospheric, calming acoustic riff which is probably the most mellow the album gets before throwing you into first song, 'Lucid Nightmares'. This is possibly one of my favourite intros to an album so far this year. 'Dancing with the Devil' doesn't let off after the first song and keeps the energy up throughout, even during ballad 'Black Magic'. The energy and atmosphere during this song is, pardon the pun, magic!

The recording also includes a bonus track of Manowar’s classic song 'Battle Hymns' which features none other than Manowar legend Ross The Boss and Symphony X’s Bassist Michael LePond which in my opinion is a very nice touch and a great way to finish the album, massive bonus points for that!.

Over all 'Dancing With The Devil' is a great album and a I'm hoping that if you listen to it to by the end you'll be dancing with the devil too!