During the dark days of thrash metal - pretty much all the 1990’s and most of the 2000’s, there were a handful of the 80’s bands that tried to keep the heart pumping and the spirit alive, albeit with differing levels of success. While the ‘Big 4’ kept the live angle alive and well, none really produced an outstanding album, with Megadeth coming closest with ‘Cryptic Writings’ and Anthrax producing good metal albums without so much of the thrash.

Other bands continued to lead the movement both live and on record, with Overkill, Kreator and of course Testament sticking out as the highlights. As thrash continues to grow into the 2020’s, the Bay Area luminaries are back with their latest offering, the fantastic ‘Titans of Creation’. Now Testament have been fairly consistent throughout their career with even their 90’s albums, ‘The Ritual’ and ‘Low’ having some serious highlights even as they added death and traditional metal elements to their songs.

Since Alex Skolnick returned alongside fellow original guitarist Eric Peterson in 2001 to re-record ‘First Strike Still Deadly’ (permanently returning in 2005) the output has steadily increased in quality and while not quite back to the classic 80’s albums ‘The Legacy’, ‘The New Order’ and ‘Practice What You Preach’, they are now right up there as one of the best metal acts on the planet.

The addition of the Atomic Clock, Gene Hoglan and fretless wonder Steve Di Giorgio has solidified the rhythm section and this lineup has been together since 2016’s excellent ‘Brotherhood of the Snake'. The stability of this lineup really shines in ‘Titans of Creation’. This is first and foremost a thrash album as expected but also expect elements of prog, doom, black and death metal thrown in with expert precision to complement the main groove and keep the songs fresh throughout the album. 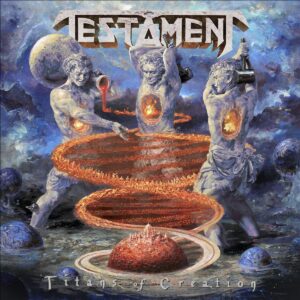 Opener ‘Children of the Next Level’ is a classic thrash affair with time changes, twin harmonies and solo duelling aplenty. ‘WW III’ ups the pace and stomps along with the brutality turned right up. Chuck Billy’s voice has really matured over the years and this is a fine example of his prowess. A slower pace next with some added swing and groove in ‘Dream Deceiver’ before ‘Night of the Witch’ turns the power back up and Peterson adds a screaming vocal performance for the chorus. The solos here really reminded me that Peterson and Skolnick are right up there with the great lead duos in metal.

‘City of Angels’ is the most melodic track on the album with a doomy feel and some great swing bass elements from Di Giorgio coming to the fore. ‘Ishtar’s Gate’ opens with some more bass action which reminded me of Annihilator’s ‘Knight Jumps Queen’ and this mid-paced thrasher grooves along nicely. ‘Symptoms’ keeps the pace lower and adds some more prog-oriented instrumental sections while Billy spits the vocals in a death style to remind us he is still there.

Full on thrash is back for ‘False Prophet’ and ‘Code of Hammurabi’ while sandwiched in between, ‘The Healers’ mixes more groove with blast beat drumming to great effect. ‘Curse of Osiris’ ups the tempo even further with a furious black metal pace set by Hoglan and some more fantastic screams from Peterson to complement Billy’s death growls.The only criticism of this album is the last track, instrumental ‘Catacombs’. Now there’s nothing wrong with it or having a short instrumental track but this feels out of place at the end and perhaps would have been a fitting intro for ‘Children of the Next Level’.

Overall this is a fantastic must-own album for all thrash fans and this together with Sepultura’s amazing ‘Quadra’, shows the world that thrash isn’t going away again any time soon.

'Titans of Creation' is released via Nuclear Blast on April 3rd.