If you want to listen to something that’s a weirdly wonderful hybrid mix of punk, metal, noise, craziness and insanity then then you need to look no further than the next release from Wasted Death called 'Ugly As Hell II – Uglier Than Hell'.

It comes four months about their debut E.P. 'Ugly As Hell' also released on Manchester based APF Records, and much like the Animal Schoolbus 'Going to Grammys House' release earlier in the year, this is what music for me is all about. It's fun, ferocious and will have your grinning like the proverbial Cheshire cat. 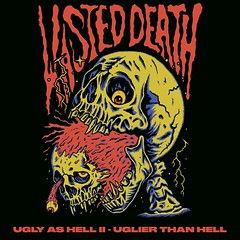 The opening song 'Tomorrow’s Children Will Eat Algae'” is a 2 minute 30 second blast of vein popping, drum barrelling noise, all slapping you in the face at the same time and it is rapidly followed up by 'Brawn Flakes' which is another 2 and half minutes of audible deliciousness, with vocalist and bassist Charlie Davis extending every ounce of his vocal range to deliver a thrashed up vibe, with a hint of Extreme Noise Terror thrown into the mix.

'Telling People What To Wear' is up next, and allows Big Lad and Petbrick guitarist Wayne Adams, to showcase his talents, with a really noisy, thrashy guitar sound, responding to the snarly vocals performance of Davis, whilst maintaining that snotty punk vibe.

Then comes my favourite track, 'Extremeley Vetted', the rhythmic pounding from USA Nails drummer Tom Brewins, really sets the tone for the song, and across the following 91 seconds, the noise is ramped up, creating an angry aggressive attitude that is bordering on the barbaric.

And then comes the final track, 'Nothing I Want Less' which is just under 5 minutes long and has a relatively gentle opening 30 seconds, and then it reacts like a spoilt brat and swings a brick into your gut, demanding your undivided attention, before going off into several weird directions, with the howling madness of Charlie Davis making you want to bang your head against a rock, before it fades off into oblivion.

From start to finish, the entire E.P. has a crazy bat shit mental attitude that makes it so much fun to listen to. My only criticism is that it’s over far too quickly, as from the opening song to the last, it is over in a flash, but what a flash it is.