Turmion Kätilöt (Midwives of Ruin) are an industrial metal band from Finland. Founded in 2003, by two dj's, originally a more of a euro electro techno beat with guitars and metal vocals, think 2 unlimited played at the back of Metallium. Thankfully things have moved on a lot with this band; Global Warning, their tenth album, is much more of a real industrial metal album, but still has a bit of a techno underscore. 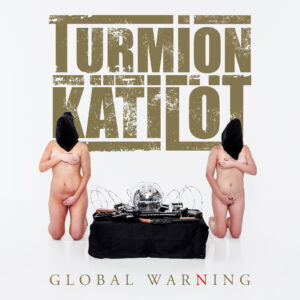 The album opens with 'Naitu' (Married) has the big beats and guitars of many euro metal and the vocals have an anthem rhythm that are reminiscent of Turisas, with a bouncing techno synth underneath. This style is repeated in songs 'Kuoleman Juuret' (The Roots of Death) and 'Revi Minut Auki' ('Tear Me Open'). The next track 'Kyntövuohi' (Plough Goat) is more of a traditional industrial track with bigger guitars and more of a driving beat similar to Rammstien's 'Ich Will' but with more of a power metal vocal. This is repeated in other tracks 'Sano Kun Riittää' (Say When Enough), 'Jumalauta' (Goddamn).

Other songs are more mixed in the industrial music scene 'Sylkekää Siihen' (Spit On It) has a more death metal vocal but still keeps a power metal sound. 'Turvasana' (Safeword) is a great track with more of an early KMFDM feel with catchy bouncy lyrics, although thanks to the language barrier I have no idea what its about.

Overall it took me a while to get into this album, being a big industrial fan I struggled at first with this album, but after a few listens it did grow on me. Its a little dated in places, with that 90s early 00s techno beats behind the really good power metal guitars and vocals a little distracting but in the end i found i really enjoyed many of the tracks on this album. If you like power metal or industrial metal give it a try.

'Global Warning' is released via Nuclear Blast on April 17th

ICYMI - Check out our interview with the band here.